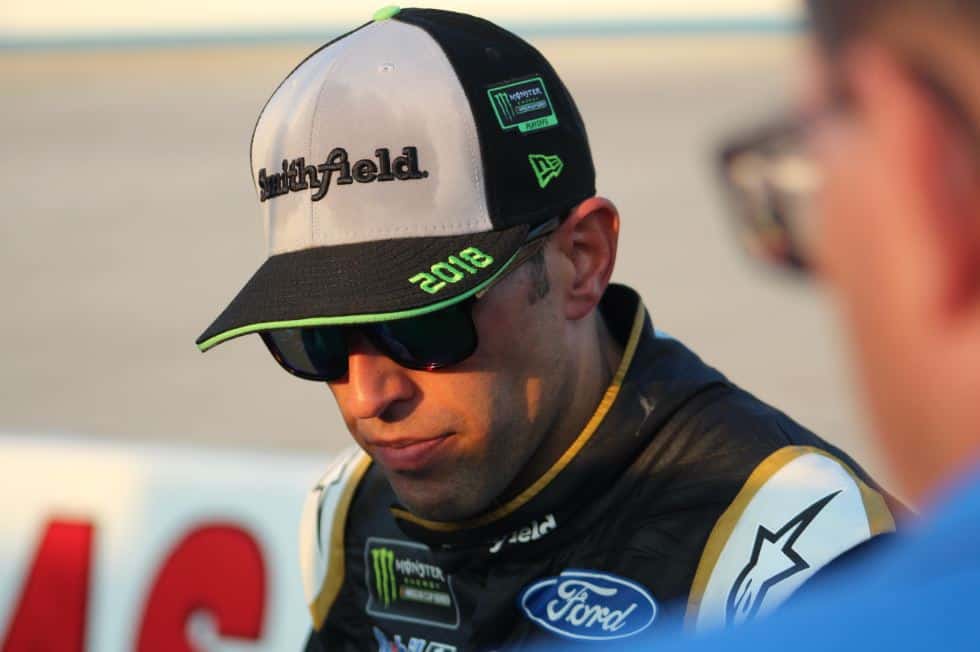 But that’s when the monster tamed the No. 10 team, just moments before the checkered flag would wave.

The driver of the No. 10 Ford sat on pit road, staring at race winner Chase Elliott as he pulled into Victory Lane. There were no words, just a look of agony for several moments.

Almirola led 64 laps during Sunday’s Gander Outdoors 400, but it wasn’t enough to seal the deal after a wreck with eight laps left by Stewart-Haas Racing teammate Clint Bowyer shook up the No. 10 squad’s strategy. With fellow SHR driver Kurt Busch running second behind Almirola, he felt like he had no choice but to pit.

He restarted in the third row with two laps left, and his aggression picked up. It was all or nothing. The No. 10 car got loose coming off Turn 2, sliding in Brad Keselowski to cause a five-car melee.

“I’m frustrated and angry,” Almirola said. “I could have been conservative and finished third or fourth like Kurt, but track position was just so tough.”

Busch finished fifth on the day, a solid one as he aims to move onto the Round of 8.

Almirola’s beat and battered No. 10 machine crossed the finish line in 13th, edging out Keselowski and Martin Truex Jr. as the final playoff drivers on the lead lap. Bowyer and Alex Bowman, whose day came to a screaming halt during the lap 398 incident, were the other playoff drivers who finished behind Almirola.

“I want to go to Victory Lane,” Almirola said. “That’s what I get paid to do.”

In what was a dominating day for Stewart-Haas Racing, Almirola was the one who seemed like he could seal the deal. He held a one-second gap over Busch before Bowyer’s incident.

Kevin Harvick, who led a race-high 286 circuits, had a valve stem issue that caused him to pit moments after making what should have been his final green-flag pit stop. Instead, he gave up the lead to Almirola, losing a lap and failing to enter Victory Lane for the eighth time this year. He managed to get back on the lead lap thanks to Bowyer’s hit, but finished sixth.

Almirola moves onto Talladega Superspeedway, tied for ninth in the standings with Bowyer. The two are 10 points behind Ryan Blaney for the final spot in the Round of 8.

The Florida native is in his first year with SHR. This is his second time making the NASCAR playoffs, and he’s already earned a career-high 12 top 10s with six races left in the season.

Greatest drivers in the world? Wrecking on the straightaway?

Aric needs to stop playing the poor me card. He caused that wreck that took out other playoff drivers. Experienced drivers quotes “take what the car will give you”.