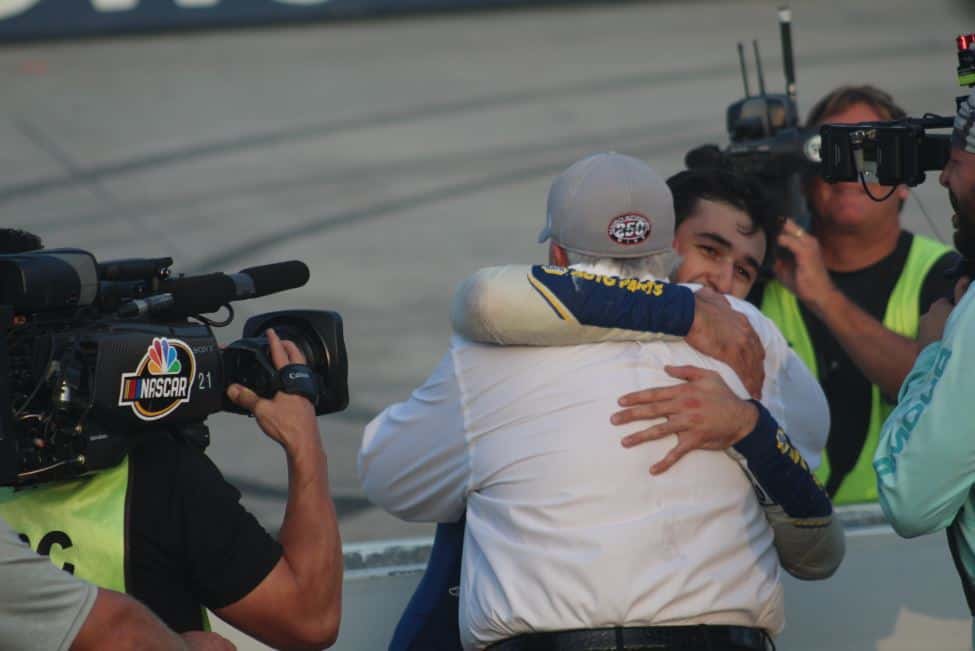 At a racetrack long considered the a stronghold for Hendrick Motorsports, the man who arguably has become the new face of the team made his mark on Sunday.

Chase Elliott was able to earn his first oval win in the Monster Energy NASCAR Cup Series at Dover International Speedway. This was also the first time Elliott has been able to win on the same track as his dad once did. NASCAR Hall of Famer Bill Elliott won four times at Dover, with all his wins coming before the younger Elliott was born.

Elliott had two heartbreaking results previously at this track. In 2016, Elliott was strong in the spring race, where he challenged Kyle Larson and Matt Kenseth in the closing laps. The crafty veteran Kenseth ended up taking home the Miles the Monster trophy that day, with Elliott having to settle for third behind Larson.

In last year’s fall race, Elliott was passed with just two laps to go by Kyle Busch after Busch caught him struggling getting by lapped traffic. It was a frustrating end of the day for Elliott, who had to settle for second after dominating the third stage and leading the most laps overall.

Sunday’s race was dominated by Stewart-Haas Racing, with Kevin Harvick leading 286 laps and winning the first two stages. For the vast majority of the third stage, the four SHR drivers had a stranglehold on the rest of the field. But one by one by one, three of the four had problems.

Harvick had to make an unscheduled pit stop, Clint Bowyer had a number of problems before ending the day with a DNF, and Aric Almirola got stuck in traffic on the penultimate restart and caused a wreck that brought out the final caution.

Elliott stayed out under caution, taking the lead for the first time all day. The No. 9 Chevrolet had hung around the Top 10 all day after recovering from a pit road penalty after the first stage. The gutsy call by crew chief Alan Gustafson didn’t faze Elliott.

“I actually thought it was the move,” Elliott said. “I was shocked that those other guys didn’t stay out there with only seven laps to go.”

Lining up opposite of Elliott on the last restart was Denny Hamlin, an old foe. But Hamlin raced the playoff driver clean.

“After last fall, I was really sure to try and not make any contact,” Hamlin said following the race on the final restart, as Elliott was able to get the victory and move on to the next round of the playoffs.

It was the 20th win for Hendrick Motorsports at the Monster Mile, and the vast majority of those wins came from two future Hall of Famers: Jeff Gordon and Jimmie Johnson.

Could Elliott eventually reach the level of Gordon and Johnson?

“Absolutely,” owner Rick Hendrick said.  “When you, again, when you see Chase, he’s run so well.  He runs good on superspeedways, he’s good on the mile-and-a-half.  He’s good everywhere, short tracks.  I think Jeff will say the same thing.  He’s cool.  He’s calm.  He doesn’t get rattled.  He knows when to race.  I’ve been so impressed with him in the last couple of years, and we just could not put it together.  I mean, we’d lose it on pit road.  We’d stay out and everybody pitted.  It was almost like he was snake-bit.”

“I mean, you think about how many second-place finishes he’s had,” Gordon himself added on. “How close he’s been, and I think to Watkins Glen, just getting that monkey off his back, just being able to get into Victory Lane, recognizing that all the ingredients that it takes to finally pull it off is such a huge relief as a driver.

“And now to be able to follow up that Watkins Glen win with a win here in the closing laps on a restart against a guy that had a little bit fresher tires, a guy you have some history with, I think this only elevates up his game and the whole team’s game of being capable of now going and closing the deal.”

All that’s really known for sure, however, is that Elliott now has nothing but playoff points to race for from now until Martinsville in three weeks. And as he keeps maturing as a driver over the next few weeks, months, and years, the No. 9 Chevrolet seems like it won’t be long until it eventually challenge for the organization’s 13th championship.