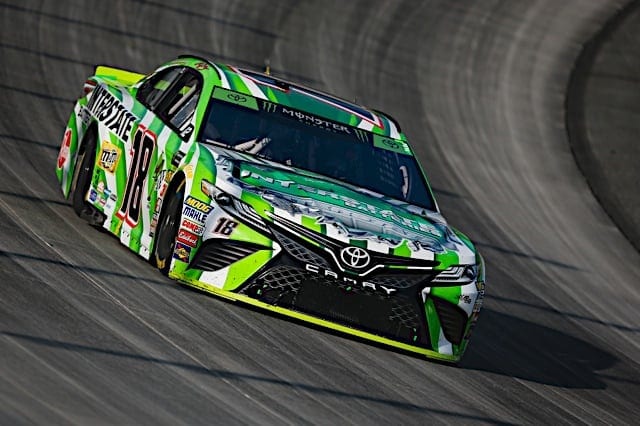 Whenever NASCAR takes to the Monster Mile at Dover International Speedway, Kyle Busch is one of the favorites. But Sunday (Oct. 7) was not his day.

Busch began from the pole and led the opening 21 laps before Kevin Harvick got by, where he went on to lead the remainder of the stage. The No. 18 ended the stage in third, earning eight stage points. The second stage is where problems began for Busch, despite finishing seventh.

The trackbar adjuster in the cockpit broke, and Busch couldn’t manually adjust his racecar. This is the second season of the driver adjustable trackbar, and it’s the second time he’s had problems with it. Busch also had trouble with it at Atlanta Motor Speedway earlier this season when it came unplugged.

Ultimately, it hurt Busch’s performance, and at one point a crew member actually hopped into the No. 18 car under caution to attempt to fix the trackbar adjuster.

“You use it [adjustable trackbar] a lot here because of the tire wear and tire buildups and things like that – parts get loose over the course of a run,” Busch said after the race. “Not having that and not knowing where it was, it was working but I just had no clue where it was throughout the whole day. We came in here poised to not run very well and that’s what we did.”

“It kind of worked in our favor today with a couple other guys that were running up front getting torn up, unfortunate for them,” Busch said. “Our day was just not very good. Speeding on pit road obviously took us out of the running for a top 10 and a solid finish. We got about what we deserved.”

Heading into the middle race in the Round of 12 at the unpredictable Talladega Superspeedway, Busch sits third on the playoff grid, 63 points above the cut-line. The No. 18 team and Harvick are the only drivers that have more than a one-race advantage on ninth position.