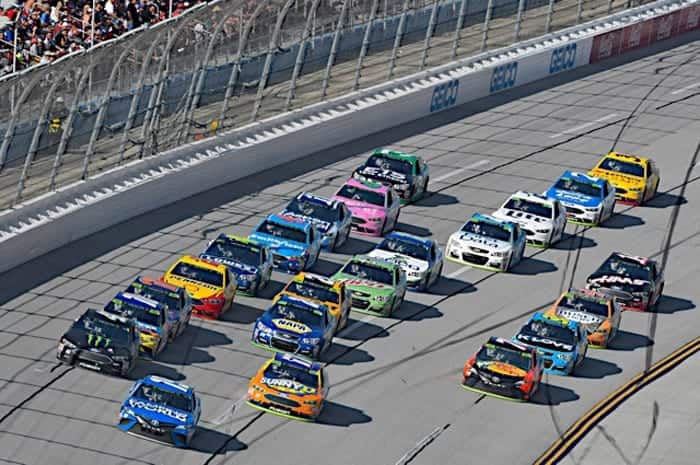 Talladega Superspeedway will mark the midway point in the 2018 playoffs and for some drivers, the race will also mark the end of their title aspirations even with one remaining track to come in the second round. As things stand, Chase Elliott’s win at the Monster Mile sees him safely ensconced in the Round of 8 while Kevin Harvick (+68 points from the cutoff line) and Kyle Busch (+63) look relatively safe.

From there on down, it’s something of a toss-up. Martin Truex Jr. sits in fourth with a 36-point cushion, but a couple of really bad finishes could easily see him slip to the wrong side of the cutoff. Joey Logano (fifth, +31), Kurt Busch and Brad Keselowski (tied for sixth, +21) and Ryan Blaney (8th) sit on the right side of the standings with Aric Almirola and Clint Bowyer ten points in arrears. Kyle Larson is 11th (-12) with Alex Bowman a distant 12th – some 34 points below the cutoff line.

Realistically, Bowman will need a win but it’s anyone’s guess – especially with a race like Talladega – how things might stack up leaving Alabama. What we’re seeing, however, is just how tight the points get at the sharp end of the season. I suspect there will be a few extremely nervous playoff drivers as we head to Sunday’s green flag.

TWO: Next Up, Talladega

This Sunday’s race will be the 99th Cup race at perhaps the most feared track in all of NASCAR – Talladega Superspeedway. It’s a streak that runs all the way back to 1969, a race won by Richard Brickhouse – the solitary victory of a six-year, 39-race Cup career. Brad Keselowski leads the way among active drivers with five victories while his Penske teammate Joey Logano has picked up three wins on the high banks.

Clint Bowyer, Jimmie Johnson and Jamie McMurray all have a pair of wins while David Ragan, Kyle Busch, Ricky Stenhouse Jr., Denny Hamlin, Kevin Harvick and Matt Kenseth each have a solitary victory. Stenhouse, a fine plate racer, has the best average finish (assuming at least 10 races run) with 11.4 with Keselowski the next closest with a 15.1 average. Kenseth, meanwhile, has led the most laps (524) with Kurt Busch having the most top 10s (19).

As always, Talladega is a game changer of a race and at a track whose middle name would be pressure (if it had one) the playoff version seems even more intense especially with the stage points precluding the riding in the back approach we’ve seen in the past. I’m looking forward to it this weekend – it should be a good one.

Another week and another Formula one win for Lewis Hamilton – his third in a row and his sixth in the last seven races. The dominance from the reigning world champ and his lighting fast silver arrow machine in the second half of the season has all but destroyed Sebastian Vettel’s title challenge. This past weekend, a qualifying snafu saw Vettel start a lowly eighth place on the grid and coupled with some in-race incidents, fourth was actually on the surface not a bad result.

Hamilton needs to outpoint Vettel by eight markers at the U.S. Grand Prix a week from Sunday to wrap up his fifth world title. Put another way, if Hamilton wins and Vettel fails to finish second it’s all over. Realistically, though, that’s already the case barring a spectacularly horrible four-race stretch for Hamilton. “I am very strict on not being complacent with our position,” said Hamilton. “There are 100 points available and I know we have to keep doing the job we are doing now until the last flag.”

You would have to be a real hater not to feel a modicum of sympathy for Aric Almirola this past Sunday. What looked to be a long-awaited end to a long winless streak (149 and counting) was eviscerated with a late race caution. Almirola was just seven laps (or miles if you prefer) away from what would have been a massive victory but it wasn’t to be and his chance slipped away as the pack reshuffled following pit stops with Almirola re-starting sixth.

“I want to go to Victory Lane — that’s what I get paid to do, to try to win races,” noted Almirola. “I’m frustrated that’s not us over there [in Victory Lane]. That’s a hard one to swallow…. We’ve just battled some sort of demon that we can’t get past to get to Victory Lane. I don’t know what it is.”

Now on the one hand, it’s hard to feel sorry for folks who get handsomely remunerated to do a job they love. As the old adage goes, you’re not owed anything in racing. But if ever there was a driver who deserves a win, Almirola would be that wheelman. Perhaps this weekend, he can get it done? He’s always been a good plate racer (remember the Daytona 500, anyone?) and someone has to win it. Why not Aric?

Finally this week, a quick word on the veteran Kasey Kahne who remains sidelined in what will be the final year of his 15-year, 18-win, 529-race career (to date) following health issues he experienced during the final 100 laps at Darlington Raceway. Kahne tested at Charlotte Motor Speedway on the Tuesday prior to the Dover race but was not cleared to race.

“Leavine Family Racing continues to work with Kahne and his medical team,” read an LFR statement and in the meanwhile, super-sub Regan Smith will continue to deputize.

Here’s hoping Kahne is able to get back into a Cup car at least one more time before the season is over to give his fans (and the fans in general) the chance to say goodbye to a well-liked veteran.