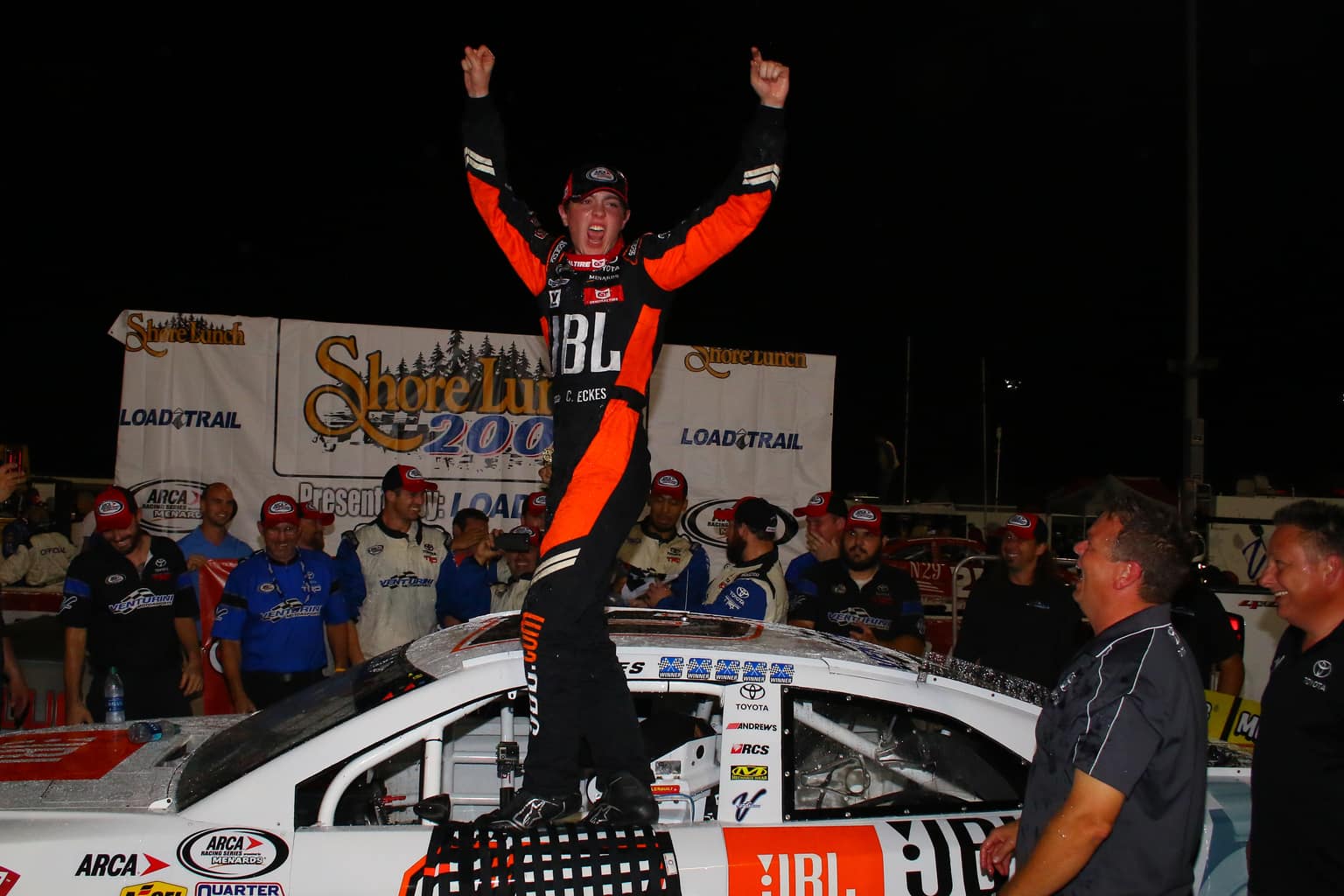 Rain delayed the start of the already-rescheduled Shore Lunch 200 for hours, but once the race finally went green on Saturday night, it was a largely uneventful affair, with polesitter Christian Eckes leading 171 of the 200 laps en route to his third ARCA win of the season. Points leader Sheldon Creed finished second and secured ARCA’s standalone short track championship, with Chandler Smith, Chase Purdy and Carson Hocevar rounding out the top five.

In a race that was slowed by only four yellow flags, Eckes was all but unchallenged, only losing the lead due to slow stops on pit road. After the fireworks of the Fall Classic at Salem last month, the field proved to be extremely well-behaved, as the lower line of the Lucas Oil Raceway proved a viable second lane over the second half of the race.

In addition to winning the short track championship, points leader Creed left Indianapolis with a 425 point lead; he will clinch the 2018 ARCA season championship simply by starting the season finale at Kansas in two weeks.

Eckes won the spring race at Salem by methodically running down a dominant Chandler Smith. On this Saturday night, he was the dominant car in the field, and there was no one going to catch him. For Eckes, it was by far the most convincing of his three wins in 2018, and it scored a trophy for Venturini Motorsports on a night that powerhouse rival MDM Motorsports put four cars in the top 10. If Eckes had run the No. 15 full-time in 2018, Creed would have had a harder time winning the title.

Speaking of Creed, though he didn’t win Saturday’s race, his No. 28 car proved among the class of the field throughout the race. Perhaps more importantly, Creed’s car for the second consecutive race was carrying the colors of new sponsor Hardee’s. With Creed in line for a truck ride for the rest of the 2018 season and potentially full-time in 2019, the former X-Games competitor appears to be getting a head start on attracting the dollars necessary to keep racing. Should Creed graduate (as expected) to major league NASCAR next season, it will be well-deserved.

In finishing on the podium for the fourth time in ARCA competition this season, Chandler Smith capped a perfect stretch of nine top 10s in nine starts. Though Smith never had the No. 20 in contention for the win this Saturday as with many other short track races in 2018, Smith left Indianapolis having clinched the title for most laps led in ARCA competition this season, despite starting less than half the season’s races.

After bearing battle scars from last month’s Salem race after spinning Zane Smith and being wrecked in retaliation later, Michael Self endured a second consecutive underwhelming performance on a short track. On a night that Venturini Motorsports took two spots on the podium, Self’s No. 55 Toyota qualified outside the top 10, and finished outside the top 10, with the Sinclair-sponsored driver scraping the wall at least once exiting Turn 4. After winning the race at Chicago in June, Self finished no better than 11th in his three short track starts at Iowa, Salem, and now Indianapolis.

Unlike Chandler Smith, Harrison Burton’s bid to score top-10 finishes in all his 2018 ARCA starts this season was derailed early, with the No. 12 driver getting involved in an incident with Kaden Honeycutt that brought out the race’s second yellow flag early. Burton continued on with his damaged car, but ultimately retired after completing 133 laps with suspension issues. Burton’s 21st place finish was the worst of his career in ARCA competition.

This race was already moved back a month after being rained out in early September. So when ARCA moved up the start an hour on next-to-no notice and got the cars doing parade laps only to end up in a massive downpour, one couldn’t help but feel a bit exasperated. One of the rainiest race seasons in history has already caused enough headaches, and while ARCA was able to finally get the full 200 laps in, it’s safe to say many race fans are ready for 2019, and hopefully a return to more cooperative weather.

The biggest news to come out of the ARCA scene this week was off track, with NASCAR announcing how the 2020 acquisition of the ARCA Racing Series by NASCAR will play out. Full details can be found here.

The primary takeaway from this announcement alleviates a personal concern of mine, as it is not phasing out the superspeedway races. ARCA is essentially the only minor league sanctioning of races on the larger tracks, and for those frustrated by the aero-dominated races at the top levels of NASCAR they are often the best option for viewing competitive racing on longer ovals. And while fans are expressing concern, and rightfully so, that contracting the K&N Series schedules will likely be of detriment to some regional short tracks, it’s about the best that can be expected. Given the car counts that both the ARCA and K&N series have seen in 2018, some form of consolidation was a given. Establishing some uniformity across both the schedules and the cars being run should be of benefit to the car counts for these events. Fans should always be vigilant in dealing with anything NASCAR is leading, but I’m going to say I’m cautiously optimistic that this new format announced can work.

Sam Mayer ran well at Dover for K&N as well. Quite a busy weekend!!!