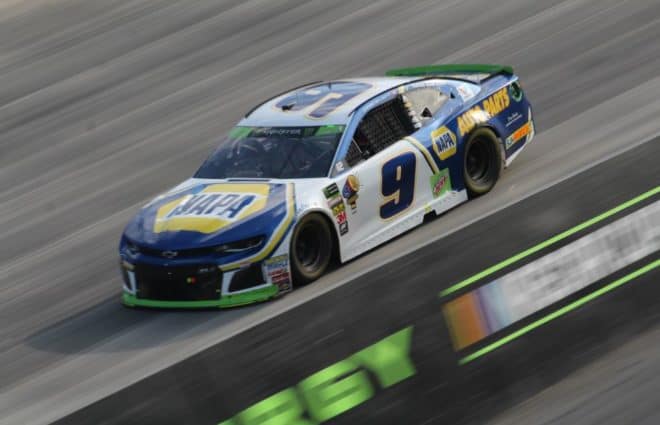 Thinkin’ Out Loud: Chase Elliott Fires Up the Siren a 2nd Time

Chase Elliott lost a heartbreaking race at Dover in the fall of 2017 and blamed himself solely for the loss. Sunday was a complete team effort that vaulted Elliott to Victory Lane and a berth in the Round of 8. Kevin Harvick and Aric Almirola both appeared headed to victory early in the race but a pit road miscue and a caution late in the race respectively ruined their days.

Mother Nature was victorious in qualifying as it was rained out. As a result the starting grid was set by the rulebook with the 12 drivers eligible for the championship filling the first six rows. Kyle Busch took advantage of that to lead the first 15 laps of the race before Harvick grabbed the top spot for the first time of the day. When pit stops cycled through Ricky Stenhouse Jr. took the lead for seven laps before Harvick regained the point. During those stops, Kyle Busch had a tire unravel and part of the cloth from that tire fouled his track bar adjuster.

The second stage was all Harvick, all the time. He led 113 of 120 laps in the stage and was never challenged. In the final stage, Harvick led 74 laps to start. But when he pitted for the final time, he had a valve stem knocked off that resulted in a return trip to the pits to replace a flat left rear. That mistake eliminated Harvick from contention, even though he did come home sixth. Almirola then assumed the point for 64 of 71 laps and was headed to the win … until his teammate, Clint Bowyer, pounded the wall in Turns 3 and 4 to bring out a late race caution on lap 392. Three drivers stayed out, two took two tires which pushed Almirola to a sixth place restart. Almirola took it to the high side through Turns 1 and 2 on the restart, got loose off of Turn 2, bounced off of the wall, and ended up wrecking with Brad Keselowski and collected three other cars including Alex Bowman and Martin Truex Jr.

On the subsequent restart, Elliott chose the outside, made it stick and rode the momentum to hold off Hamlin and get redemption from last year’s disappointment. Elliott scored the win, Denny Hamlin rode old tires to second place behind Elliott. Joey Logano crossed the line in third, Erik Jones and Kurt Busch rounded out the top five.

In the middle of the race, it looked like Stewart-Haas Racing was going to make a very loud statement about the 2018 playoffs. The four cars for SHR were in the top four spots. As the only team to put all of its cars in the Round of 12, SHR was poised to put a stranglehold on the Round of 8, but are now in danger of having two or three of its cars not advance. This is also a big deal that the one of the two Hendrick Motorsports entries still in the playoffs is in the final eight. For the organization that has dominated the sport for years, they have struggled in the last two years. Elliott has been the strongest car for the last two years and this is an opportunity for him to get a shot at a title. It appears that the HMS teams have finally found speed.

Tuesday saw the announcement of the rules package for the Cup Series in 2019. After the Daytona 500, restrictor plates will no longer be the norm at Daytona and Talladega. They will be replaced by tapered spacers, which are utilized currently. Next season, the spacers will be used to reduce the horsepower at tracks, longer than a mile, to 550 hp. On tracks a mile and less, the horsepower will be limited to 750. There will also be a taller spoiler and a radiator pan that will provide more downforce on the front of the car to balance out the spoiler. What is not disappearing is the side skirts or the splitter.

Kasey Kahne was not cleared to return to the seat for Dover, so Regan Smith was back behind the wheel of the No. 95 again. When medical issues arise, you never want to speculate because it could be a million different things. Everyone is just hoping, at this point, that Kahne gets better and lives a long and happy life doing whatever he does after his Cup life.

The season isn’t over yet, and anything can happen over the remainder of the races, but Christopher Bell looks like he very well could be “that guy” for this generation of race fans. Every 10-15 years, that guy comes along who wins titles in two of the national touring series and looks like he might be able to become the first to win all three. Bobby Labonte still might have a shot if he’d just get in a truck and run for a title. Greg Biffle was many people’s pick to finally do it. Kyle Busch would seem to have an easy shot if he just jumped into a truck for a full season. Right now Austin Dillon is the one actively carrying the banner. If things play out like they look to be lining up, Bell will have a great shot if he manages to win the XFINITY title in 2018.

There was a lot of discussion that Jimmie Johnson would rebound from his disappointment at Charlotte with a victory at what has been his best track. Before the race even began, Johnson had a failure on the spindle of the right front of the car with a lower ball joint breaking, and went into the garage before the race even went green. He was 10 laps down by the time he got back onto the track.

Kyle Busch started on the pole and had the strength to lead early. Unfortunately for him, the right rear tire came apart during the first stage of the race. When it did, some of the fabric from the tire damaged the track bar adjuster. Busch lost the display of his adjuster and it ultimately turned out that the adjuster quit working. His day then got worse when he was penalized for speeding on pit road during green flag stops late in the race.

Harvick was en route to his second Dover domination of the season. He pitted with 75 laps to go and the left rear tire had the valve stem knocked off as he was leaving the pits. The subsequent return to pit road put Harvick down a lap and the day ended up going from domination to just another race.

Hamlin still is searching for a win this year but Sunday he came home in second. This year has been tough for Hamlin to swallow, especially since the disappointment at Indianapolis. Hamlin went into a bit of a funk after that race and it led to him not advancing to the second round of the playoffs. A second-place run, and a clean finish with Elliott, might be a bit of a shot in the arm for the rest of the year for Hamlin.

Kurt Busch is a sneaky pick for the Championship 4 this year but the final 10 races are a good group of tracks for him. He’s been running quite well over the last couple of months and you saw it on Sunday. Busch was in the mix and had a very good shot at the win. If he can make it through Talladega with a good run, he will be poised for the Round of 8 and a win in that round could easily happen.

This is Elliott’s second triumph in 2018.

Elliott has one career victory at Dover.

The two career wins for Elliott ranks him 102nd on the all-time list, tied with 26 other drivers.

At Dover this is Hamlin’s first career top-two finish.

On the all-time list, Hamlin is tied with Fireball Roberts for 39th with 22 career runner-up finishes.

Joey Logano survived damage and the big crash at the end to claim a podium run.

At Dover, Logano has three career third-place finishes which is his best ever at the track.

For his entire career, Logano has 52 podium finishes. That ranks him 47th on the all-time list, tied with Fred Lorenzen and Dick Rathman.

William Byron finished 19th and won the Rookie of the Race.

Round two of the playoffs is upon us. 12 drivers are eligible to win the title but only eight will advance beyond this round. The playoff contenders are listed below with their associated points. The four drivers eliminated from title contention are listed because they are still eligible to finish as high as fifth. Race winners are bolded and will automatically advance to the next round.

Three hundred laps into the race it was headed squarely for a one beer, stinker of a race. The race was far from a barn burner but the twists and turns over the final 75 laps resulted in three ice-cold Octoberfests from Fordham and Dominion Brewing Company.

The ROVAL might have been the wildcard in some people’s books, but the original wildcard is next weekend at Talladega SuperSpeedway. Starting at 2:00 PM on Sunday Oct. 14 with coverage on NBC. You can also see the race on the NBC Sports app. If you want to hear the race you can listen on your local MRN affiliate, www.motorracingnetwork.com and SiriusXM NASCAR Channel 90.

What is it that Mike Neff doesn’t do? The writer, radio contributor and racetrack announcer coordinates the site’s local short track coverage, hitting up Saturday Night Specials across the country while tracking the sport’s future racing stars. The writer for our signature Cup post-race column, Thinkin’ Out Loud (Mondays) also sits down with Cup crew chiefs to talk shop every Friday with Tech Talk. Mike announces several shows each year for the Good Guys Rod and Custom Association. He also pops up everywhere from PRN Pit Reporters and the Press Box with Alan Smothers to SIRIUS XM Radio. He has announced at tracks all over the Southeast, starting at Millbridge Speedway. He's also announced at East Lincoln Speedway, Concord Speedway, Tri-County Speedway, Caraway Speedway, and Charlotte Motor Speedway.
@MNeffShortTrack
Previous Dover Win Exemplifies Chase Elliott’s Growth As A Driver
Next Up to Speed: Did Kyle Larson Get Saved Again? 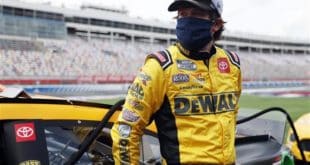 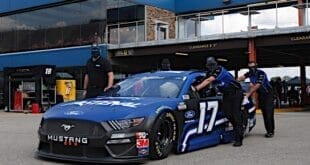 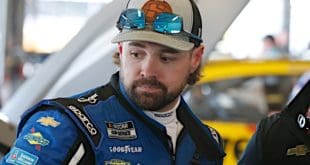