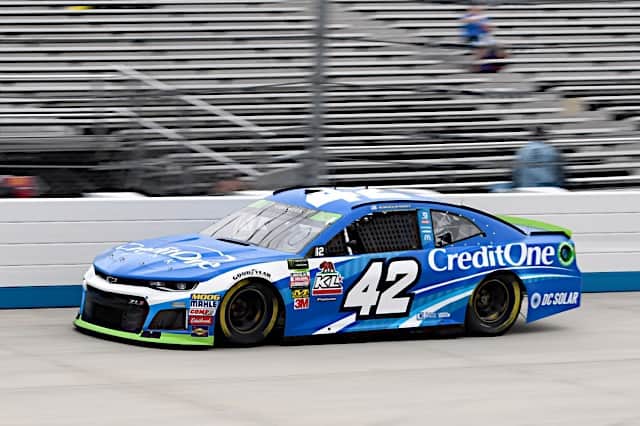 Sunday’s race at Dover International Speedway was supposed to be a good one for Kyle Larson.  In nine previous starts at the Monster Mile, he had only finished worse than 11th once.  Larson also looked great in the practice sessions leading up to the race.  It seemed like he was well-prepared to take on the fourth race of the playoffs and avenge a tough loss at Dover last year.

However, the No. 42 team did not run nearly as well as expected.  For 95 percent of the race, Stewart-Haas Racing made Dover its personal playground.  And even when Miles the Monster served up a bit of late race chaos, it was Chase Elliott who wound up avenging his own loss at Dover from last year.  Larson was a non-factor on a day where he was supposed to contend, and after finishing 12th, he finds himself 12 points below the playoff cut line heading to Talladega Superspeedway.

It is not a good scenario, but it could have easily been so much worse for Larson.  Before Clint Bowyer’s crash with eight laps to go, Larson was in danger of dropping over 30 points below the cut line.  That would have been a much more difficult deficit to close, especially with Talladega next up.  Certainly, the Alabama track is a major obstacle that all the championship hopefuls will have to clear.  But Larson has only two top-10 finishes at Talladega in nine starts, and no top fives.  Kansas Speedway, the last track in the second round of the playoffs, has been more of a mixed bag for Larson.  His last three races there include two top-six finishes, but also the 39th place result that effectively took him out of the championship battle last year.

Two weeks from now, we may look at Dover as the race that destroyed Larson’s championship hopes in 2018.  Or it could be the race that saved them. Since other playoff drivers encountered issues at the tail end of the race, Larson is better shape points-wise than he would have otherwise been.

This is the second week in a row that late-race circumstances had a dramatic impact on Larson’s season.  In the closing laps of last week’s race at the Charlotte Motor Speedway ROVAL, Larson was trying to catch Brad Keselowski for the lead.  The No. 2 might not have had enough fuel to reach the finish, but even if he did, Larson probably would have finished no worse than second.  Then Ricky Stenhouse Jr.’s crash brought out a caution and set up a restart.  With the win on the line, Larson and Keselowski both drove too deep into Turn 1, setting off a massive crash that took both of them out of contention.

In short, losing the victory at the Charlotte ROVAL almost took Larson out of the playoff picture completely.  But the stage points he earned earlier in the race, along with his last gasp pass of Earnhardt, were just enough to save his season.

Larson ran poorly at Dover and failed to earn a single stage point, and the race ended similarly to last week’s event.  The first caution of the afternoon for something other than a stage ending came on lap 340 for an axle near pit road entrance.  That caution, and its ensuing restart, set off what Kurt Busch described after the race as a “wave of crap.”  Bowyer’s crash on lap 392 guaranteed that Larson would beat at least one other playoff driver.

However, the real tipping point in Larson’s favor came after the restart when Almirola and Keselowski made contact, setting off a wreck that collected five playoff drivers.  Alex Bowman got the worst of it, but the damage to the No. 10 car ended Almirola’s hopes of winning and dropped him below the playoff cut line.  Martin Truex Jr. and Ryan Blaney also sustained damage in the crash, but not Larson.  In fact, Larson received the free pass and got back on the lead lap, ultimately beating Almirola, Keselowski and Truex to the finish line.

Having worked through the late-race chaos better than several of his competitors, Larson’s task for the next two weeks is not as daunting as it could have been.  Bowman is completely buried in the points and would likely need to win at Talladega or Kansas to advance.  Bowyer and Almirola are both 10 points below the cut line, just two ahead of Larson.  The No. 42 underperformed at Dover compared to pre-race expectations.  But the race itself feels more like a lost opportunity for Bowyer, Bowman and especially Almirola given how much closer they were to earning good finishes than Larson.

If Larson advances to the next round of the playoffs at the expense of any of those drivers, Dover will be a big reason why.

Larson has had plenty of his own missed opportunities in 2018.  The No. 42 team has watched wins and playoff points slip away this year in agonizing fashion, just like Almirola and Kevin Harvick did Sunday.  But so far, Larson has been able to salvage enough good finishes to keep himself in the game, even without any wins.

With only six races left in the season, we will see if Larson’s resiliency can ward off the ghosts of wins that got away.