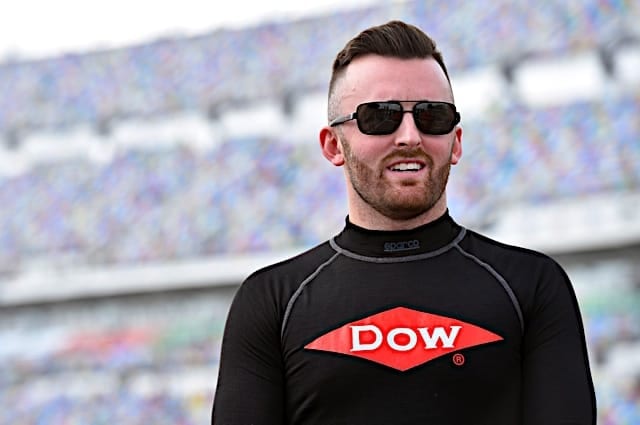 It was the second Gander Outdoors 400 of the season, and just like the first at Pocono Raceway, it was an uninspiring event that went to overtime following a series of last-second cautions.

Kyle Busch started on the pole for the fifth time this season after qualifying was rained out, but Harvick dominated the opening stage – leading the field by half a lap at one point – and then captured the second stage win as well, though his lead wasn’t quite as large.

There were 15 lead changes among eight different drivers, mostly during pit stops.

There were five cautions in total, all three “natural” cautions coming in the third stage.

Kasey Kahne missed his fifth straight race, so Regan Smith again took the reins of the Leavine Family Racing No. 95 Camaro ZL1, just missing the top 20 with a 21st-place result. Kahne’s best finish this season is fourth in the July Daytona race, with a non-plate best finish of 15th at Bristol and an average finish of 22.8. Smith’s results this season: 20th at Indianapolis, 12th at Las Vegas, 31st at Richmond, 15th at the ROVAL. If LFR is looking into fielding a second team next season, even if it’s only part-time, Smith should probably draw some consideration for the ride.

Just like New Hampshire (and what feels like several other races this season), SHR was by far the dominant team, running all four cars in the top 6 for much of the race, but they shot themselves in the foot, costing the team another trophy to add to their spectacular season to date. Clint Bowyer‘s car wound up smoking and in the wall late, which indirectly cost Aric Almirola the win, as he was leading easily at the time, crashing with Brad Keselowski on the restart. Harvick crushed the field, leading 284 laps, but an inconveniently-timed flat tire robbed him of the victory.

JGR got everyone into the top 10 on an off day when – just like New Hampshire – nobody ran that well. Sometimes when you’re that good, you make your own luck, or take advantage of opportunities when they arrive. Together their quartet has eight wins, 36 top-fives, 62 top-10s, with 10 poles, nearly 1,700 laps led and seven stage wins this season.

Jimmie Johnson has won 11 times at Dover, but his dismal 2018 campaign hit a new low on Sunday. A suspension part called a ball joint broke before the green flag dropped, sending the No. 48 into the garage for repairs. He hit the track ten laps later, only to get busted for a pit-road speeding penalty late in the first stage. He finished 36th after three other cars had parts failures end their day early, but he was 17 laps down and never improved his position by passing cars on the track at any point during the race.

Johnson can finish no worse than 16th in points after squeaking into the playoffs, but his average finish in 2018 is 17.2, and it was his ninth finish worse than 20th this season, his fifth result scored in the thirties.

Austin Dillon‘s eighth-place run was the fourth top-10 in the past five races for Childress, and the fifth was the Charlotte ROVAL, where his teammate Ryan Newman was 11th. Together they have 14 top-10s this season, and with XFINITY Series frontrunner Daniel Hemric moving to the No. 31 next season, things might be turning around for RCR.

Yes, Elliott’s second win was a boost to Chevy camp, but as a group they were awful at Dover this weekend. Elliott and Kyle Larson were running in the 10th-15th range for most of the day, and their fellow Chevy playoff driver Alex Bowman was a lap down or near it for basically the entire event before getting caught up in the Almirola/Keselowski wreck. Jamie McMurray and Ryan Newman were nonexistent, running 17th and 18th, respectively.

When Aric Almirola’s No. 10 SHR Smithfield car was revealed late last season, I wasn’t sure about the color of the number font, which has turned out to be coppery in some lights and gold in others. But it’s turned out to be pretty readable, and the blurry motion lines are a little busy, but overall the design has grown on me as the season’s gone on, even if it is a little on the dull side as far as the color scheme goes, it’s still better than what he was driving at RPM.

The MENCS and Camping World Truck Series return to Talladega Superspeedway this weekend.

It will likely be a demolition derby, judging by the last few years’ worth of plate races, though as much as you can have a certainty when it comes to these tracks, pick a Ford driver for your fantasy team – the Blue Oval has won the past six Dega events, seven of the past eight and nine of the past 12.

In the CWTS race (Saturday, Oct. 13 at 1 p.m. ET on Fox) there will be at least two Big Ones, and ThorSport Racing teammates Matt Crafton and Ben Rhodes will be the playoff drivers eliminated when the checkered flag closes out the first round.

In the Cup race, one of the SHR or Penske cars will survive the chaos and park it in Victory Lane, and at least one Hendrick car will wreck.

Please NASCAR as you write the season ending script. Don’t give the title to Elliot

Please stop crying and thinking everything is scripted. I am so sorry your driver lost, so you feel the need to throw a tantrum.