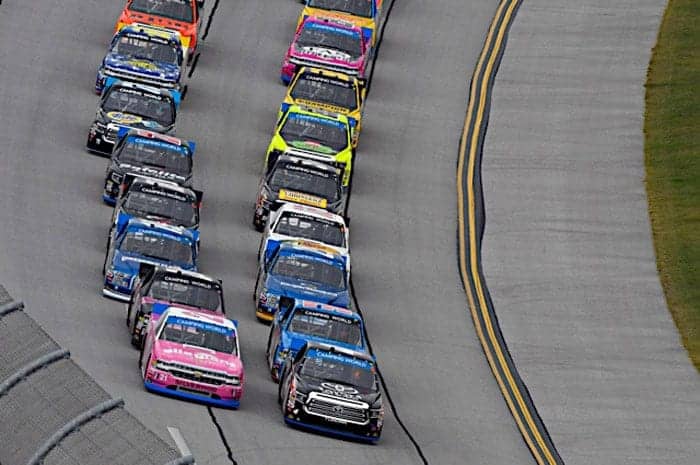 After a one-month hiatus from competition, the NASCAR Camping World Truck series heads to Talladega Superspeedway for the running of the Fr8 Auctions 250. This is the final race in the first round of the Truck Series playoffs.

36 teams are on the entry list, meaning that four teams will go home, barring any late entry list changes.

Spencer Gallagher will drive the No. 2 for GMS Racing. Gallagher replaces Cody Coughlin, who was released from the team from sponsorship issues. Coughlin had been the full-time driver of the No. 2 this season.

Korbin Forrister returns to competition and will drive his own No. 7 truck. Tanner Thorson shifts to the No. 12 this week, while Max Tullman replaces him in the No. 20.

Making his second start of the season, Jamie Mosley will drive the No. 15 for Premium Motorsports. Mosley’s teammate will be full-time driver Wendell Chavous in the No. 49. Chavous announced earlier this week that Talladega will be his final NASCAR race.

Bryan Dauzat will drive the No. 28 for FDNY Racing. Dauzat has made one start this season, finishing 18th at Daytona International Speedway.

Scott Lagasse Jr. returns to the seat of the No. 30 for On Point Motorsports. Making his first start since Kentucky, Robby Lyons will wheel the No. 33 for Reaume Brothers Racing.

Chris Fontaine will pilot his own No. 47, while David Gilliland will strap behind the wheel of the No. 51 for Kyle Busch Motorsports. Gilliland will be racing against his son Todd, who is the full-time driver of the No. 4.

Bobby Gerhart will drive his No. 63, while Clay Greenfield will pilot his own No. 68.

Parker Kligerman will drive the No. 75 for Henderson Motorsports. Kligerman is the defending winner of the race.

Finally, Joey Gase will strap behind the wheel of the No. 83 for Copp Motorsports with sponsorship backing from Sparks Energy.

If the limit is 32 trucks at Talladega the limit for Cup should be 32. We know the 8 that shouldn’t be excluded.

It was supposed to be “included.”