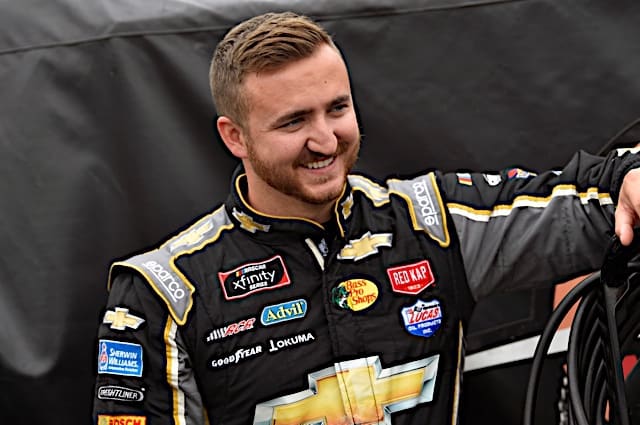 At the beginning of the season, many people probably didn’t know who Shane Lee was. But maybe people are starting to recognize his name. Whenever he’s been in Richard Childress Racing’s famed No. 3 Chevrolet in the NASCAR XFINITY Series this year, the North Carolina native has put together solid finishes — despite being a rookie.

Lee, 25, grew up competing in go-karts, moving over to late models as he grew older. In 2016, he ran half the ARCA Series schedule, before going full-time in 2017 for Cunningham Motorsports. In 20 races, Lee had a best outing of third in the season-opening race at Daytona International Speedway.

At the beginning of 2018. RCR announced Lee would share the No. 3 ride with Austin Dillon, Ty Dillon, Brendan Gaughan and Jeb Burton. But it’s Lee who has raced the car for 13 events — the most of the five drivers.

Thus far, Lee has competed in nine of the 29 races and scored a pair of top-10 finishes. His best result is sixth, also at Daytona.

Having just two top 10s isn’t for a lack of speed. RCR has among the best equipment in the garage, but Lee has had a problem putting full races together.

“We just need to finish where we qualify and run the race and they’d be really good,” Lee told Frontstretch of his 2018 season. “At Las Vegas [Motor Speedway], I think we were running sixth or seventh when we got clipped in the rear, and it pretty much ended that one. Other than that, the guys give me good cars every week. We just need to keep them up front.”

On a weekly basis, Lee is consistently getting the most out of the No. 3 car in qualifying, as he has the best average starting position of the five drivers.

“The speed makes it good, and everyone on the team works well together,” Lee said. “We’ve been good at unloading good and having the speed to start with, which helps me, coming to tracks I haven’t raced at before, not having to worry too much about the car and just figure myself out.”

In the nine races Lee has been in an XFINITY ride, he’s been to eight different tracks, running twice at Iowa Speedway. Prior to coming to the top preliminary series in motorsports, the only NASCAR sanctioned tracks he had competed on were Daytona, Talladega Superspeedway, Pocono Raceway, Kansas Speedway, Texas Motor Speedway, and the aforementioned Iowa. His rookie season has been dedicated to getting familiar with the different racetracks.

“It makes it a little bit tough,” Lee said of having limited experience at most, if not all, the XFINITY tracks. “We spend a pretty good amount of time on the simulators. It really tends to help out, so that’s pretty much been my biggest tool and watching videos and the notes from what these guys have the year before.

“The first three or four races, Ty [Dillon] was on the radio with me just about every practice giving me tips. That helped out a good bit. Anything you ask Matt [Tifft], he will tell you whatever he can. When we get back to the shop on Monday or Tuesday, we all talk over everything.”

With just four XFINITY races remaining in 2018, Lee will be driving the No. 3 in all of them. Dating back to this past weekend at Dover International Speedway, he will run five consecutive races in the series, where his prior longest streak was two.

“That’s going to be a big help,” Lee said of running consecutive races. “It’s a little bit tough [not running more than one race in a row]. I like the short tracks. It comes back to more of the old-time stuff.”

Expectations were limited for Lee heading into the season. In his nine campaigns, he has an average running position of 13.5 and has led six laps — all at Iowa. On the flip side, he has been passed 59 times more during green flag runs than he’s made passes.

But then again, some of Lee’s finishes — Bristol Motor Speedway (14th), Talladega (15th) and Las Vegas (30th) — have been from tough luck.

“I think the expectations of where we ran before where some bad luck struck was pretty good,” Lee said. “We ran top five and top six in every race we’ve ran so far at some point. Now, we just need to do whatever we can to finish there.”

The No. 3 team was knocked out of the playoffs at Dover in terms of the owner’s championship race. They qualified for the postseason via an Austin Dillon win at Michigan International Speedway in June.

As for his future, Lee would love to continue at RCR, but it will be sponsorship dependent. Childress Vineyards, a wine estate owned by car owner Richard Childress, has sponsored him in every race.

“I would like to run the full deal,” he said. “It makes it hard just running once a month for now. We haven’t started working on any of that stuff for next year yet. We’re trying to get these races in a row and see how it goes.”