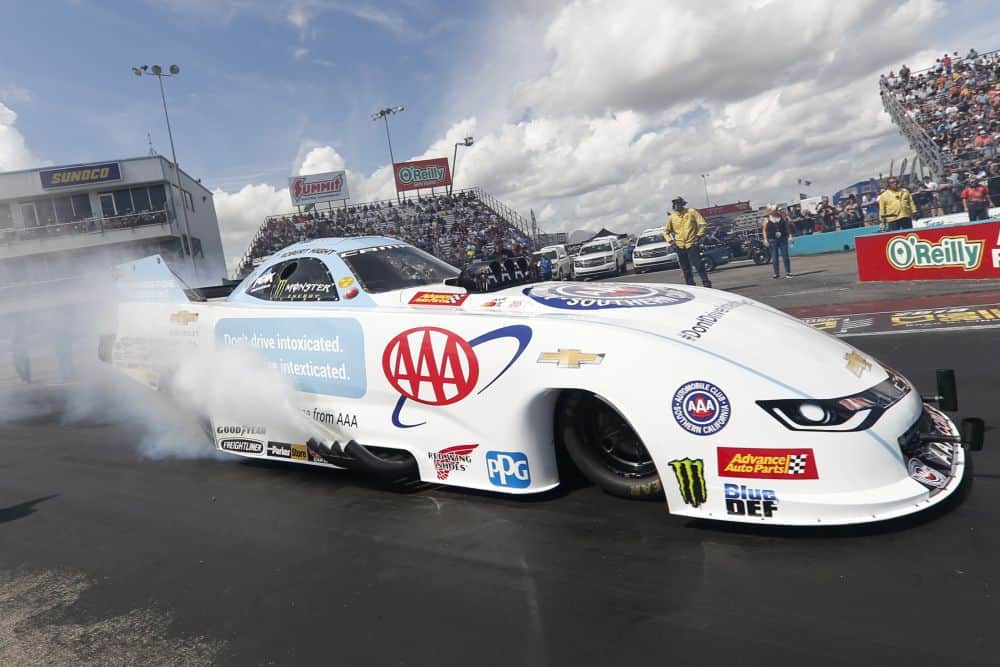 How about your Funny Car points leader Robert Hight? He’s won two in a row and pulled away from hard-charging J.R. Todd to lead by 50 points. But wait, there’s more. The first of those two wins, a few weeks ago in St. Louis, came in spectacular (and perhaps a more ironic form spectacular is implied here) fashion.

For the full picture, see the video below, but Hight suffered an explosion in the final round — blowing the body off the car and hitting the wall hard. So hard, in fact, that Hight was sent to the hospital where it was determined he’d broken his collarbone. He’d broken it bad enough that he needed to have surgery.

“I just remember not getting to celebrate a win in St. Louis, which was a bummer. I was in the hospital, and my team was already back at the trailer thinking about putting everything back together,” Hight said. “I remember laying there and hearing them say collarbone and eight weeks to get well. I was thinking, ‘Oh, man. I have the points lead, and these opportunities don’t come around that often.’”

Hight didn’t have eight weeks to heal. The season would be long over, and Todd or someone else would be holding the championship trophy unless he could find a way to get back on track in two weeks time and stay there for the final four events of the season.

“I got back to California, and Tom McKernan with the [Automobile Club of Southern California] said he would take me to see some doctors. The first doctor said the same thing, ‘Just let it heal.’ The next doctor at USC said I needed to get it fixed, especially considering the line of work I am in,” Hight said. “He said I could be back in a couple of weeks. I did everything he said I should do. I went back late on Thursday after over a week of resting. He gave me the clearance and I built an apparatus to keep the shoulder restraints off of my collarbone. The doctor told me I would not have gotten the clearance without the Simpson Racing protection.”

Hight now has a titanium plate holding his bone together. And yet, he qualified for the next race in Texas, and he went rounds. He went all of the rounds as a matter of fact, winning the whole thing. Of all people, it was Todd that Hight had to face in the final round. When it came down to it, pain or no pain, and he says there was really no pain, Hight did what he had to do.

“That was one of the biggest rounds I have ever raced right there,” Hight said. “J.R. Todd is number two in the points, and he was 30 behind me going into the final round. Had I lost, I would only be 10 points ahead, which isn’t much. Now, since we won, we have a 50-point lead, which is a 40-point swing.”

Let’s not forget Hight’s team either — they also deserve a lot of credit. They had to scramble to build Hight a new car in time for the Texas race because their original car was destroyed. They not only made the deadline but built him a winning race car. How important that is cannot be underestimated. A destroyed race car and a back up that wasn’t up to par is what derailed Steve Torrence’s championship run last year.

There are still three races left to contend, but overcoming this kind of diversity and maintaining momentum means that Robert Hight is going to be tough to beat.