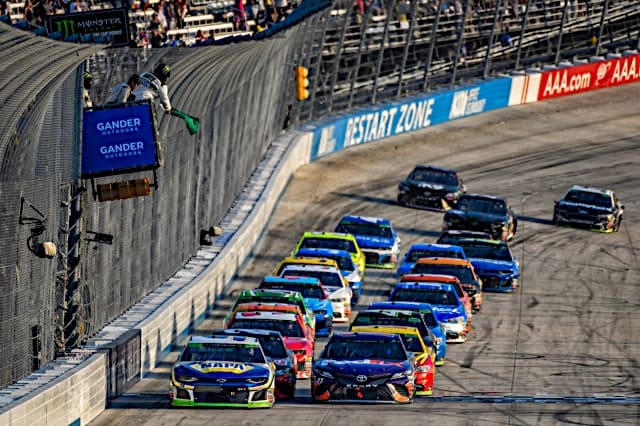 Miles the Monster played his cards close to the table on Sunday as the Monster Energy NASCAR Cup Series kicked off the Round of 12. Miles wasn’t really seen at the beginning of the race but as the laps wound down, he began taking out drivers who he didn’t see going to Victory Lane, starting with Kevin Harvick. After winning stage two, the valve stem got knocked off of a tire, forcing a second pit stop that cost him the lead and ultimately the victory.

Miles the Monster cleaned house after that, forcing Aric Almirola, Clint Bowyer, Alex Bowman and others into uncomfortable situations as the series heads to Talladega. How did this weekend’s odd race at Dover shake up the power rankings? Find out below.

Harvick has seen a lot of races go the way Sunday’s did, but without a doubt, it still has to leave a bad taste in his mouth. He led 286 of the 404 laps on Sunday but still didn’t bring home the trophy. However, his rebound after the tire issue was definitely one of the factors that was looked at for this week’s power rankings.

The sweet orange paint scheme that Harvick ran on Sunday is also promoting the National Forest Foundation. The organization revealed that his strong performance on Sunday helped generate $25,000 to help plant much-needed trees in our national forests.

Big shout out today to @BuschBeer for the tremendous support of National Forests at #MonsterMile Dover Speedway. Proud to see @KevinHarvick's strong performance generating $25,000 to plant trees on our National Forests. @StewartHaasRcng pic.twitter.com/dpfucxcI0k

Brad Keselowski was on the bad side of the Aric Almirola incident on Sunday. He was running up front after crew chief Paul Wolfe made another one of those gambling calls that almost placed the No. 2 crew in Victory Lane again. Like Almirola though, Keselowski benefited from the lack of cars on the lead lap and still salvaged an OK day.

Qualifying was rained out on Friday which is always is a good thing for campers who are Keselowski fans. He was able to spend some extra time with the fans for the #2thecampground campaign, a weekly outing where he makes times for some of his most avid fans.

If your at the track. Send me your spot # and a picture of your campsite and we may stop by ???

Since it was announced that Furniture Row Racing would be shutting down at the end of the year, Martin Truex Jr. and his team have at times not been 100 percent there, especially not to the degree they had been earlier this season and last season. This isn’t a good time to start to fade, especially with Talladega looming this weekend. Yes, Kansas is a great track for him but he could enter in a hole if things don’t go right this weekend.

Which driver in the Big 3 is most in jeopardy of not making the Championship 4?

The easy target may be Martin Truex Jr., because of what the No. 78 team is facing with its upcoming closing, says @pkligerman. pic.twitter.com/bSX0kU4WoR

Atlanta Braves pick up a much-needed game three victory, Georgia defeats Vanderbilt and Chase Elliott picks up his second career victory at Dover. It was a really good weekend for Elliott after he was able to hold off Denny Hamlin late in the race to pick up the victory that makes him immune from Talladega and Kansas.

Things are starting to pick up for this organization and they are growing into a threat much like they did last season. If they continue this pace, Elliott could be the spoiler in the Championship 4 party at Homestead.

Kyle Busch and his team were really off all weekend long and despite picking up the pole, Busch only led 21 laps. The driver adjustable track bar was the frustrating thing for Busch on Sunday which ended up working but didn’t improve anything on his car. For whatever reason, this team just wasn’t clicking last weekend.

Aric Almirola did everything he needed to do on Sunday but cautions fell at some inopportune times, which resulted in the No. 10 car losing another race. Some luck has to come Almriola’s way sooner or later but it didn’t come in Dover. Almirola has been a strong restrictor-plate driver as of late which means he could be a threat at Talladega this weekend.

These guys deserve to be in victory lane. I tried all I could to get it done yesterday, but the focus is now on Talladega. We can definitely get it done there. Just need a little luck to go our way… #SmithfieldRacing pic.twitter.com/3ya3hMYqxs

Kurt Busch ran inside the top 10 for much of the day, and had the late caution not came out, he likely would’ve battled with his teammate Almirola for the victory and potentially earned the immunity that Elliott gained.

Busch finished second at Talladega in May and had a strong car in both Daytona events this season. It could very well be the weekend that Busch picks up that elusive Talladega Superspeedway victory should he play his cards right.

What a tidal wave of events at the end… we had a solid race, and made it through for a top 5. Pit or not to pit, that is the question?! pic.twitter.com/dQaURgSyle

The May Talladega winner is starting to get hot and, with the series returning to Talladega this weekend, Logano could very well put his name in the discussion for the Championship 4. Logano picked up his 100th career Cup Series top-five finish on Sunday by finishing third, his best finish since finishing runner-up at Darlington in September.

Congrats to @joeylogano on earning his 100th career @nascar Cup Series top-5 this weekend at the @MonsterMile! #TeamJL #NASCAR pic.twitter.com/e7fRYRqkW0

Like a few of the other playoff drivers, Ryan Blaney was just there on Sunday. Not really doing anything wrong but not really doing anything right either. Dover was statistically Blaney’s worst track in this round which means if he just had a solid afternoon, then it would make Talladega and Kansas “house money” for the driver of the No. 12.

Blaney did get the chance to speak about a fan who absolutely lost it after Blaney picked up the victory at Charlotte. Check it out below.

You think this @Blaney fan was happy on Sunday?

After just straight up hitting everything but the snack bar at Charlotte, Larson made his way into the Round of 12.

In the opening race for the round in Dover, though, he just didn’t have a good day, finishing 12th and is now sitting on the outside looking in as he heads to the two tracks that were his kryptonite last season.

Larson is going to need to avoid having the same results he did last season at Talladega and Kansas. Kansas started his rough ending to 2017 after an engine failure. They can not afford to go down that path again if they expect to make it to Homestead with a chance at the championship.

Well that sucked today… coulda been worse I suppose. Need some good runs these next 2 weeks.