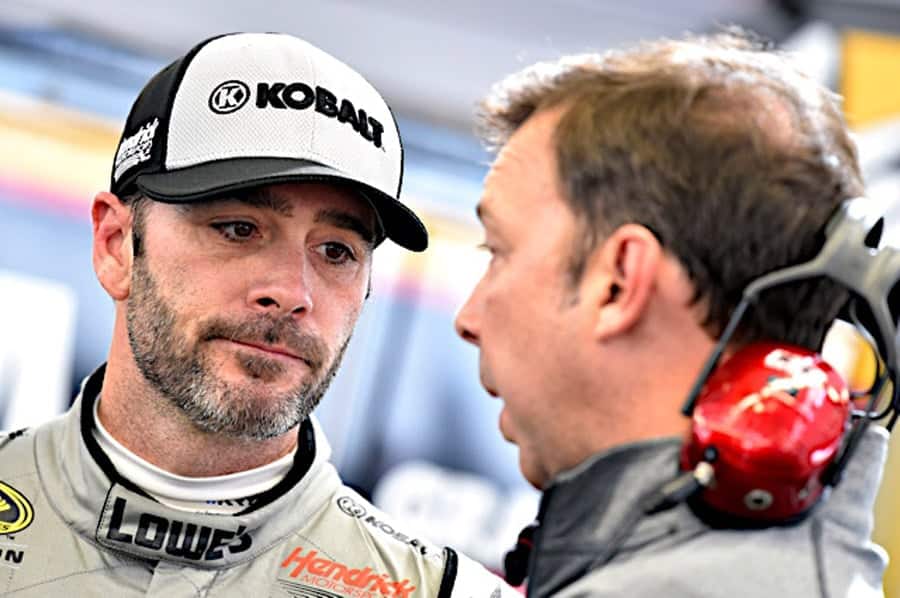 On Wednesday (Oct. 10), Hendrick Motorsports announced that at the end of the season the pairing of Chad Knaus and Jimmie Johnson would end. The duo has won seven Monster Energy NASCAR Cup Series championships together. The question this week: was breaking the two apart the right move?

Ease on Down the Road

Was it the right move? How about why didn’t Hendrick Motorsports make it sooner?

There’s no denying that Jimmie Johnson and Chad Knaus have been one of the best driver-crew chief duos in NASCAR history — maybe even the best. But the honeymoon was over, and it had been for some time.

Really, it’s a move that should have come a year ago. But a year ago, Johnson was the defending Cup champion, and while he was in a bit of a slump, he and Knaus had always righted the ship before. What reason did HMS have to believe this time would be different? That instead of finding a way to win races, the No. 48 would find themselves in the throes of the worst season the team has ever had?

When times were good, there was no reason to doubt the pair. Even when they fought like brothers (don’t make me come back there…), they won — and won, and won some more. Five titles in a row, and the wins kept coming.

Racing is cyclical. Always has been, always will be. One of the cycles that flows through it is teams finding something that makes them dominant, sometimes to the point where it seems like nobody can catch them, and that can last months, seasons. But catch them they do, and for a while, it’s still okay because they may be equal, but that team is still just as good as the others. While the others have been trying anything short of driving the kitchen sink to catch up, the dominant team hasn’t been trying much of anything. After all, why change what works?

But then, another team finds something that makes them faster, more dominant, and the first team doesn’t really know what to do with that. They haven’t wanted to stray from what worked so well for so long. But now… someone has a better strategy, a faster setup, new ideas. And as quickly as it began, the dominance is over.

Such is the way of the sport.

Knaus is the easier piece to move. Will he be successful with William Byron? If he can find a different edge, one that works for Byron, sure.

What of Johnson? He’s got some grey in his beard now, but he hasn’t forgotten how to drive a race car. In recent years, poor strategy and questionable decisions have taken wins he might have gotten. While it can be argued that early in his career, Johnson won some races because of Knaus, later on he also won some in spite of him.

So the time has come to move on.

The only question of right moves here is Meendering. He’s currently Elliott Sadler’s crew chief in the XFINITY Series and was an engineer for Jeff Gordon and Dale Earnhardt Jr. in the Cup Series. He’s an unknown. Byron’s current crew chief Darian Grubb is more experienced on top of the pit box. Grubb has 23 Cup wins with five different drivers, including a pair with Johnson as a fill-in for Knaus, who was serving a NASCAR suspension at the time. Grubb would’ve certainly been a more obvious choice and maybe a better one.

But as for Johnson and Knaus? It was absolutely time to go their separate ways. –Amy Henderson

Let Them Go Out Together

Hold your change of horses!

Jimmie Johnson’s career might be reaching the far edge of the stream, but he hasn’t totally crossed it just yet — that makes this is a bad decision. Yes, he and Chad Knaus have been snapping at each other more often this season, but Knaus is the only crew chief Johnson’s ever had in his MENCS career (not counting the times when Knaus was suspended or Johnson’s partial schedule in 2001).

Crew chiefs typically last around their peak form for about 10 years, and Knaus has been paired with Johnson for 17. Will he be able to work with a youngster like William Byron now that he’s not a whippersnapper himself? Byron hasn’t exactly set the world on fire his rookie season with veteran crew chief Darian Grubb, who’s worked with — and won with — drivers like Tony Stewart, Carl Edwards, Denny Hamlin and even Casey Mears. Why should Byron’s pairing with Knaus work any better?

Could it be possible that Knaus is simply burned out from doing this for so long and can’t analyze data and do everything else required of a crew chief to succeed regularly any longer?

Johnson will be paired with Kevin Meendering, currently the crew chief for Elliott Sadler’s No. 1 team at JR Motorsports in the XFINITY Series. He’s been in that position for the past three seasons, and in 94 starts, has led Sadler to three wins with perhaps the series’ most powerful team. They do have 38 top-fives working together and 75 top-10s, averaging out to about one top-five result every three races and a top-10 run three out of every four events.

Like Johnson, Sadler is a veteran winding down his career, and his wins with Meendering all came in 2016. He’s finished on the podium five times so far this season, but his results the past five races include a 35th at Indianapolis Motor Speedway, 14th at the Charlotte Motor Speedway ROVAL and 11th at Dover International Speedway.

Also, who will take over the No. 1 pit box for Noah Gragson next season? He’s a hotheaded driver that has shown speed while driving for Kyle Busch Motorsports in the Camping World Truck Series the past several seasons, but emotion gets the better of him sometimes and causes late wrecks when he was in position to win.

Johnson is having the worst season of his MENCS career this year, with only two top fives, 10 top 10s, no poles, 29 laps led and an average finish of 17.2 through 30 races. He barely made the playoffs and was eliminated after the first round.

But still, Johnson and Knaus go together like peanut butter and jelly, Bert and Ernie or Hendrick Motorsports and Victory Lane. Their splitting apart feels like Michael Jordan’s time with the Washington Wizards or Brett Favre’s with the New York Jets and Minnesota Vikings — on one level, good that they’re still playing, but on the other, a little pitiful and confusing seeing them in the wrong uniform.

They deserved the chance, likely when Johnson’s contract is up in 2020, to ride into the sunset side-by-side.  –Wesley Coburn

Understand, JJ can’t drive this lighter car with less hp, he has never been able to figure it out.
When will everyone look back and realize this. It’s not rocket science folks.

As long as we’re playing Swami, let me in on the act….

I think Jimmy will win few more races in the next couple of years… maybe 3 or even four… with a new crew chief. If Chad were to stay on with Jimmy, same result. So it really boils down to what Jimmy and Chad want to do. Neither has anything to prove and their legacies are formidable and secure. I have to feel like this was probably a unanimous decision between the two, with Rick Hendrick’s blessing. Jimmy is done winning championships either way, but he’ll win a few more races regardless of the crew chief.

when i saw how hendrick embrassed and congratulated chase sunday at his win at dover, i immediately thought “the torch has been passed”. . it reminded me of hendrick and gordon when gordon was winning and young.

older drivers tend to have difficulty when the cars are changed. johnson will retire with hendrick and still be involved with the organization like gordon is.

This will provide an answer to the question, “Can Knaus win with another driver?”

The one question I don’t think will ever be answered is, “Can JimmIE win with a different owner?”

Was Splitting Up Two 7-Time Champions the Right Move?

Sorry but in this era these are 7… Chase, wave around, lucky dog championships.