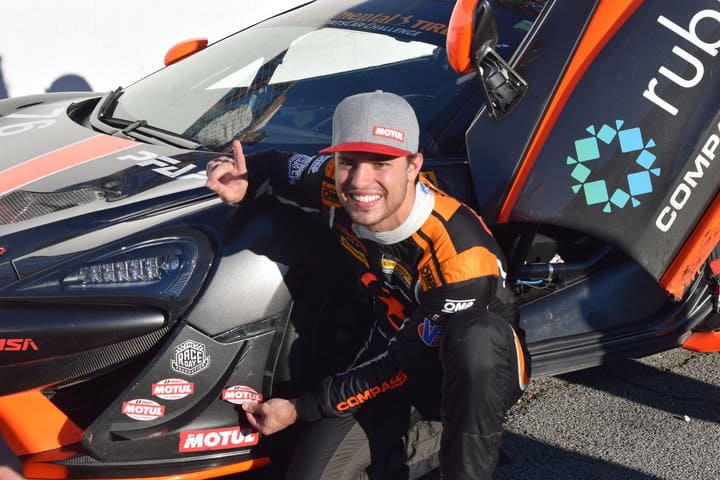 Compass Racing’s Paul Holton was able to more than back up his pace from earlier in the day on Thursday (Oct. 11).  Holton set a new IMSA Continental Tire SportsCar Challenge track record with a lap at 103.526 mph to win the pole for Friday’s FOX Factory 120.

“It’s been really good today,” Holton told Frontstretch after the session.  “We were chasing a bit of a handling issue this morning.  I didn’t do too many laps this afternoon, but [Road Atlanta[ is basically my second home track since I have so much time [on course] here.  I really enjoy it.  It’s good for the car and it was a no brainer to go out to [win the pole] today.”

Other notables include Andrew Davis qualifying eighth in the Rebel Rock Racing Chevrolet Camaro GT4.R and Drive for the Cure 200 winner Chase Briscoe qualifying 10th in a Ford Mustang GT4.  Cole Custer will start right behind Briscoe in 11th.  Finally, points leader Owen Trinkler will start 15th after skipping both practices earlier.  According to Trinkler, there was nothing wrong with the car.  The decision was made not to practice a week ago, but the team did run during Wednesday’s Promoter Open Test.

Winward Racing/HTP Motorsport’s No. 33 Mercedes that was fastest  did not go out in the session after Russell Ward crashed the Techemet Mercedes-AMG GT4 during the 15-minute pre-qualifying practice session.  Ward was ok, but the Mercedes has significant damage to the left front corner.

In TCR, there was a dramatic increase of speed when it came time to put up or shut up.  EEuroparts.com Racing’s Tom O’Gorman put down a lap at 101.781 mph to claim the class pole and 13th on the grid.

O’Gorman’s lap, which was nearly 1.5 seconds quicker than in practice, was seven-tenths of a second faster than Compass Raciug’s Tom Long.  Rumcastle Racing’s Luke Rumburg will start third in class in his Volkswagen, followed by JDC-Miller MotorSports’ Michael Johnson.  Kieron O’Rourke rounds out the top five in the second eEuroparts.com Racing Audi.

In Street Tuner, BimmerWorld Racing’s Nick Galante put the No. 81 BMW 328i on pole with a lap at 94.083 mph.  The lap was a quarter of a second faster than MINI JCW Team’s Nate Norenberg, while Bodymotion Racing’s Max Faulkner was third fastest.

The TCR and Street Tuner session was red-flagged and declared complete after 11 of the scheduled 15 minutes due to Rodrigo Sales pulling off at Turn 7 with a mechanical issue.  IMSA officials held off on throwing the red flag until the minimum 10 minutes under green was complete to make the session official.

The FOX Factory 120 is scheduled to go green at 1:25 p.m. EDT Friday afternoon.  The race will be streamed live at both IMSA.com and FansChoice.tv.