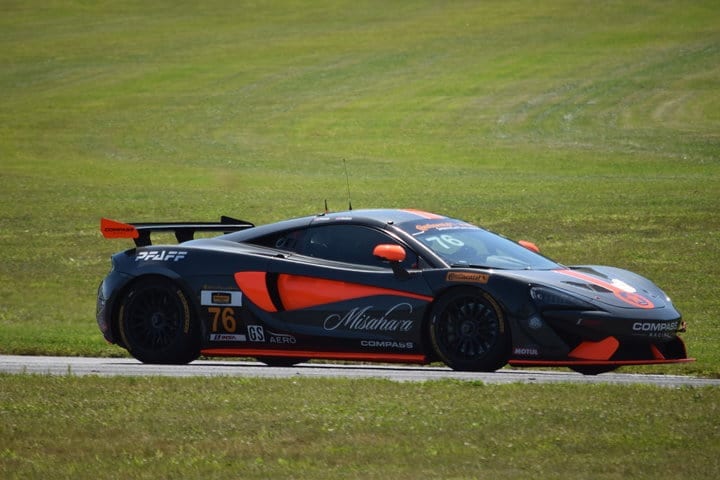 C0mpass Racing’s Paul Holton was fastest overall in the first two practice sessions of the day on Thursday (Oct. 11) at Road Atlanta.  Holton topped the charts early on in Practice No. 2 with a lap at 102.834 mph.

In TCR, JDC-Miller MotorSports’ Stephen Simpson was fastest in class with a lap at 100.177 mph, good enough for 19th overall in his Audi RS3 LMS Club Sport.  Simpson’s time was three-sevenths of a second faster than eEuroparts.com Racing’s Tom O’Gorman.  Rumcastle Racing’s Tanner Rumburg was third in his Volkswagen, followed by the Audis of Lee Carpentier and Kuno Wittmer.

The session ended a couple of minutes early after Quest Racing’s Roger Eagleton spun off at Turn 2.  Eagleton was ok, but the car missed the second practice session.

In the early afternoon practice, Holton’s chart-topping lap, which is an unofficial CTSC track record, came less than five minutes into the session.  The time was one-third of a second faster than Foss in the No. 56 Mercedes.  Motorsport in Action’s Jesse Lazare was third quickest in his McLaren, followed by BimmerWorld Racing’s Tyler Cooke in his BMW.  Liefooghe was fifth fastest.

O’Gorman was fastest in TCR with a lap at 100.274 mph, good enough for 21st overall.  The lap was eight-hundredths of a second faster than Compass Racing’s Britt Casey Jr.  Wittmer was third fastest, followed by Simpson and Pierre Kleinubing in the No. 75 Compass Racing Audi.

Street Tuner was led by MINI JCW Team’s Mat Pombo with a lap at 94.290 mph, good enough for 33rd overall.  The lap was seven-tenths of a second faster than brother Mark Pombo in the No. 52 MINI.  Jones was third fastest.

Unfortunately for the MINI squad, the No. 52 MINI wit h team owner Luis Perocarpi at the wheel came to a halt between Turns 2 and 3 late in the session.  A red flag was thrown to retrieve the stricken MINI, although it didn’t appear that there was any smoke or fluids dropped on-track.

Missing from both practice sessions was the No. 46 TeamTGM Mercedes of point leaders Hugh Plumb and Owen Trinkler.  The point leaders did not participate in either session.

CTSC teams have a short 15-minute warmup session scheduled for 4:35 p.m. today.  That rolls into a 5 p.m. qualifying session that will set the grid for Friday’s FOX Factory 120.