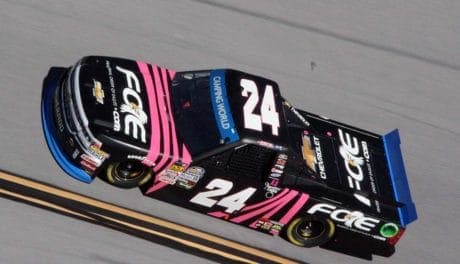 GMS Racing continued their reign of dominance at Talladega Superspeedway on Friday during practices for Saturday’s Fr8Auctions 250.

The organization racked up their first XFINITY Series victory with Spencer Gallagher in May. They rolled off the truck with a fast fleet of trucks with Justin Haley leading first practice and Gallagher leading final practice.

Of the 34 trucks who turned a lap in the session, Scott Lagasse Jr. was the slowest with a speed of 149.268 mph (64.153). The margin between first and 34th place was 14.663-seconds. The session was highlighted with multiple small packs and single-truck runs.

Gallagher, second in the first session, finished the second session quickest. That session was highlighted by single-truck runs as they prepared for the qualifying session slated for 5:35 p.m. ET.

Todd Gilliland, who is making his superspeedway NCWTS debut, finished the session in third while Matt Crafton and Jordan Anderson rounded out the top-five speeds.

Results from Final Practice for the Fr8Auctions 250

Qualifying, as noted above, kicks off at 5:35 p.m. ET. Single truck qualifying will have Lagasse Jr. turning the first lap and Haley turning the final lap of the two-round rapid fire qualifying session.