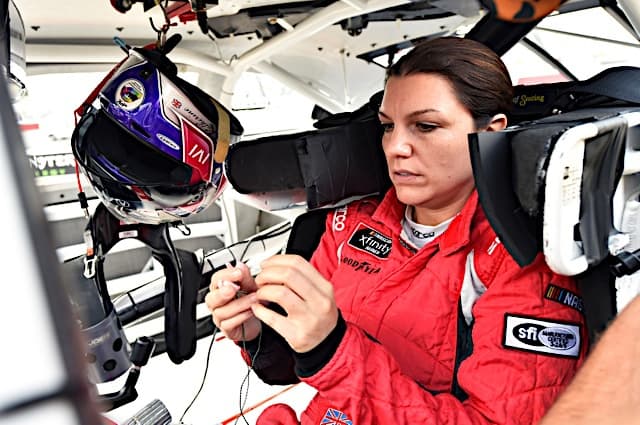 Meyer Shank Racing announced Friday morning (Oct. 12) that they will field a full-time effort in the 2019 IMSA WeatherTech SportsCar Championship consisting solely of female racers.  The No. 57 Acura NSX GT3 will be led by Katherine Legge, currently fighting for the GT Daytona championship in Meyer Shank Racing’s No. 86 Acura.  She’ll be joined for the full season by Jackie Heinricher, an bio-scientist who is the CEO of Bioshoot, a company that is developing new plant sciences for the agriculture and forestry industries.  Heinricher has previously raced in Lamborghini Super Trofeo North America, Ferrari Challenge and Red Bull Global Rallycross Lites.  Daytona will be her IMSA WeatherTech SportsCar Championship debut.

“It feels great, I have always wanted to do something like this to show the appeal of racing to a wider audience,” said Legge in a press release.  “Jackie [Heinricher] has done an amazing job to create this opportunity and develop this partnership. I’m thrilled to be working with Simona [de Silvestro] and Bia [Figueiredo], and it is exciting to return to Meyer Shank Racing with the Acura NSX GT3. We’ve had great success and we are looking forward to building on that starting at Daytona.”

In addition, primary sponsorship, which was an issue for Legge for much of the year, will not be a problem.  Heinricher’s own racing company, Heinricher Racing, has reached a deal with Caterpillar that will see the heavy equipment company sponsor the Acura for the full season.

“I am honored to partner with CAT and to have their support,” Heinricher stated.  “My vision has long been to bring together a diverse team of four female drivers, some of the fastest globally, to join forces to compete together, and with the support of CAT, I get to see my long held vision become reality.  I am excited to be joining Michael Shank and the entire winning MSR team in this amazing partnership and to have the honor to compete with Katherine, Ana, and Simona.”

For the endurance events, additional star power will be on tap.  For the endurance events, the team will add Brazilian racer Bia Figueiredo, better known in North America as Ana Beatriz, to the team.  Figueiredo was the first woman to win a race in Indy Lights.  She has 29 career starts in the Verizon IndyCar Series with a best finish of 11th at Toronto in 2011.  After leaving INDYCAR, Figueiredo has raced in Stock Car Brasil with backing from longtime sponsor Ipiranga, a Brazilian oil company.

Finally, for the Rolex 24 at Daytona (in minimum), the team has also secured the services of Simona de Silvestro, another former INDYCAR driver.  De Silvestro previously raced four full years in INDYCAR, first for HVM, then with KV Racing Technology.  Her best career finish was a second in Race No. 1 at Houston in 2013.  De Silvestro is currently racing full-time in the Virgin Australia Supercars Championship for Nissan Motorsport in a Nissan Altima.

Team co-owner Michael Shank is quite intrigued about the team’s possibilities.

“This is truly a groundbreaking effort for next year, not only for us as a team but for the series as well,” Shank stated.  “It’s great to have Katherine [Legge] back with us, she has been doing great this season as we fight for the championship. I also want to thank Jackie Heinricher] for developing the Caterpillar partnership and we are excited to have her on board. Simona [De Silvestro] and Bia [Figueiredo] are also very strong talents, and hopefully with them all joined together we can make a statement next year.”

In addition to the full-time IMSA WeatherTech SportsCar Championship campaign, the team is also targeting an entry in the 2019 24 Hours of Le Mans.  If such an effort came to fruition, it would include Legge, Heinricher and a third driver.