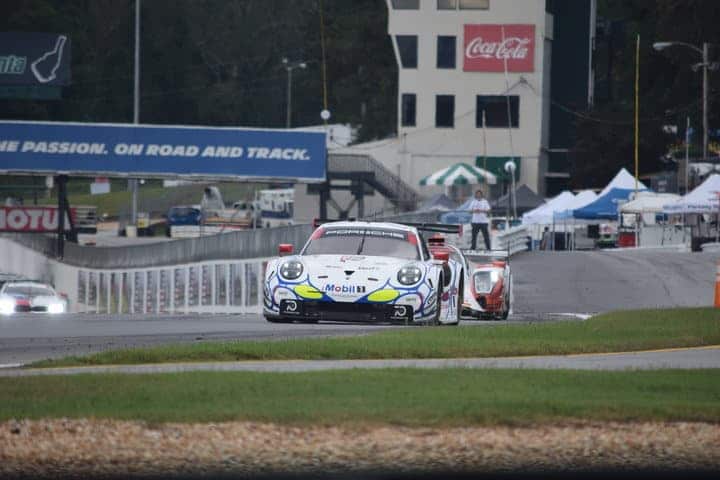 Friday was a day of announcements at Road Atlanta.  First up was Meyer Shank Racing’s announcement of an all-female GT Daytona team for 2019 with Katherine Legge as the lead driver.  Later in the day, it was Road Atlanta’s turn.

The track announced that Michelin, which becomes the official tire of IMSA in 2019, has acquired the naming rights to Road Atlanta starting in 2019.  As a result, the track will be known as Michelin Raceway Road Atlanta.  The company already serves as the Official Tire Partner at Road Atlanta and the French tire manufacturer’s signs are all over the 2.54-mile circuit.  This year, there’s even a Michelin sign underneath the vehicle bridge to the infield that spells out Michelin, but in a graffiti-style.

In addition, see the tower on the right with the Coca-Cola sign on it in the picture above?  That’s the current control tower at Road Atlanta, which dates back to the 1970s.  It contains the Media Center, workrooms for public relations representatives, the PA booth, race control and the broadcast/radio booths.  That building likely won’t see the end of next week.

In 2019, Road Atlanta becomes Michelin Raceway Road Atlanta & our current tower will be replaced w/ the brand-new Michelin Tower. Couldn't be more proud of this partnership & can't wait to see what the coming months have in store! @IMSA @MichelinUSA
More: https://t.co/9CRKSU8AEQ pic.twitter.com/YCHiez0AO0

As part of the press conference, a brand new tower known as the Michelin Tower was announced (rendering pictured in the tweet above).  It will provide an event space on the first floor that can hold up to 300 people.  A new Media Center will be on the second floor, while 10 hospitality suites will be spread between the third and fourth floors.  Race control will be on the fourth floor, while a rooftop viewing deck will also be available.

The current plan is to start demolition of the current control tower as soon as the Petit Le Mans race weekend concludes.  The goal is to have the new Michelin Tower complete in time for the 22nd running of the Motul Petit Le Mans in Oct. 2019.  For that to happen, there will be near around-the-clock work on the facility for the next year.

“Michelin’s legacy at Road Atlanta runs deep, and these moves will, without question, drive that legacy even further,” said Geoff Lee, president and general manager of Road Atlanta.  “Michelin and Road Atlanta’s histories intersect at so many points that it would be impossible to separate them, and this partnership will solidify that bond.  To say that we are beyond thrilled to become Michelin Raceway Road Atlanta in 2019 would be radically understating our position.”

During the press conference itself, the notion of the professional sports teams local to the Atlanta area were broached.  All three of the major sports teams in Atlanta (Braves, Falcons and Hawks) are on at least their third facility in the region (the Hawks are on their fourth).  The Falcons play in the state-of-the-art Mercedes-Benz Stadium, which just opened last year.  The Braves left Turner Field (which was converted from it’s role at Olympic Stadium during the 1996 Summer Olympics) at the end of 2016 to play at the new SunTrust Park in Cobb County.  Meanwhile, the Hawks play at State Farm Arena (formerly Philips Arena), which opened in 1999.  The building was just renovated at a cost into the nine-figures and is having an open house on Oct. 20 to show off the new setup.

Road Atlanta opened in 1970 and while it has been renovated since then (most notably after it was purchased by Dr. Don Panoz in 1996, which resulted in the newer pit lane and the chicane being installed), some of the facilities are not top-notch.  Mentions during the press conference about the air conditioning (or lack thereof) in the tower were made by track officials during the press conference.  Once the construction is done, track officials hope that those complaints will be in the past.

Note: Road Atlanta’s current control tower does in fact have air conditioning, but the system currently in use isn’t really designed for a such a building.  It can get quite hot at times.