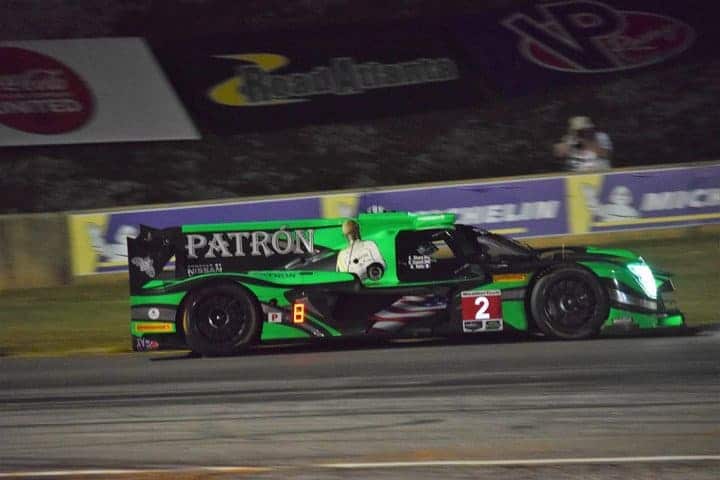 Norman Nato, making his IMSA WeatherTech SportsCar Championship debut, started his weekend off right at Road Atlanta Thursday (Oct. 11).  Nato turned in a lap at 127.804 mph during night practice to lead the field for the day.

In the first practice of the day, Action Express Racing’s Cadillacs reigned supreme.  Filipe Albuquerque put the Mustang Sampling-sponsored No. 5 DPi-V.R. on top of the charts with a lap at 127.216 mph.  That lap was two-sevenths of a second faster than points leader Felipe Nasr in the No. 31 Cadillac.  Wayne Taylor Racing’s Jordan Taylor made it three Cadillacs at the top by turning in the third fastest time.

Fastest of the non-Cadillacs was Acura Team Penske’s Ricky Taylor in fourth, less than half a second off of Albuquerque.  Mazda Team Joest’s Oliver Jarvis was fifth quickest.  CORE autosport’s Colin Braun was the fastest of the LMP2 cars in sixth.  The top nine cars were within one second of Albuquerque.

The session had one red flag due to Stephen Simpson going off course and stopping his ORECA 07-Gibson.  However, Simpson was able to resume and drive back to the pits under his own power after some assistance.

In GT Le Mans, it was a dogfight as the teams all attempted to put down the fastest lap.  Early on in the session, Ford Chip Ganassi Racing IMSA’s Dirk Müller put down a lap at 116.718 mph and let the rest of the class take stabs at it.  It held up to be the fastest GTLM lap of the session and good enough for 15th overall.

Müller’s lap was only four-hundredths of a second faster than teammate Ryan Briscoe in the No. 67 Ford GT.  Corvette Racing’s Antonio Garcia was third quickest, followed by Porsche GT Team’s Laurens Vanthoor.  Tommy Milner was fifth fastest in the second Corvette.  The entire class was separated by less than 1.25 seconds.

GT Daytona saw Montaplast by Land-Motorsport’s Christopher Mies fastest in the morning with a lap at 113.897 mph.  That lap was three-eighths of a second faster than 3GT Racing’s Jack Hawksworth in the No. 15 Lexus.  Turner Motorsport’s Markus Palttala was third quickest in his BMW M6 GT3, followed by the Mercedes of Jeroen Bleekemolen.  The Porsche of Wright Motorsports’ Patrick Long was fifth quickest.  Add in Bryan Sellers in sixth and Daniel Serra seventh and you have seven different manufacturers in the top seven positions.

CORE autosport has a chance at the Prototype championship on Saturday.  Braun is a big reason why that is so and he showed that again in the second practice, topping the charts with a lap at 127.587 mph.

Braun’s lap was one-seventh of a second faster than Tristan Vautier in the No. 5 Cadillac.  Vautier is in the No. 5 this weekend after Jõao Barbosa suffered rib injuries in a crash at the start of the America’s Tire 250 at WeatherTech Raceway Laguna Seca last month.

Edwards’ new teammate for the week, Virgin Australia Supercars Championship racer Chaz Mostert, had a bit of an adventure in the session.  The Australian racer went straight at Turn 1, going through the gravel trap and struggling to get up the hill on the wet grass from Wednesday night’s heavy rains.  Mostert was able to continue without the need for assistance, so no red flag was thrown.

GT Daytona saw Bleekemolen put his Riley Motorsports Mercedes on top with a lap at 113.582 mph, good for 24th overall.  Bleekemolen’s lap was one-eighth of a second faster than Dillon Machavern in the Turner Motorsport BMW.  Mies was third fastest, followed by Àlvaro Parente in the Continental Tire-sponsored No. 86 Acura for Meyer Shank Racing.  Sellers was fifth fastest in the Paul Miller Racing Lamborghini, sporting a black scheme with neon green highlights this weekend.

90 minutes of action under darkened clear skies saw the teams do their best to get the most out of their cars.  Acura Team Penske, Mazda Team Joest and Action Express Racing each topped the sheet for a time, but it was Nato who set the fastest lap with less than a minute remaining in the session.

Nato’s time was nine-hundredths of a second faster than teammate Pipo Derani in the No. 22 Nissan DPi.  Ricky Taylor was third quickest, followed by Albuquerque and Bomarito.  The top 10 teams, back to CORE autosport’s Romain Dumas, were within one second of Nato’s time.

While Ricky Taylor was able to put the No. 7 third in class, Montoya had a bit of an adventure in the No. 6.  He tried to overpower the chicane.  The chicane won.

Earlier, @jpmontoya went into the chicane a little hot here at @RoadAtlanta. That's not going to work. Luckily, the car wasn't hurt much at all. pic.twitter.com/jfjel5QsCg

Montoya was able to drive back to the pits after the off-course excursion and got a once-over before going back out.  Teammate Dane Cameron ultimately turned in the ninth fastest time in the session.

In GT Le Mans, Milner was fastest in the No. 4 Corvette with a lap at 117.461 mph, the fastest GTLM lap of the day.  Milner’s lap was one-tenth of a second faster than Garcia in the No. 3 Corvette.  Briscoe was third fastest, followed by Alexander Sims in the No. 25 BMW M8 GTE.  Sébastien Bourdais was fifth quickest in the No. 66 Ford GT.

WeatherTech SportsCar Championship teams have one more practice session on Friday morning.  That session will begin at 11:15 a.m. EDT and will run for one hour.