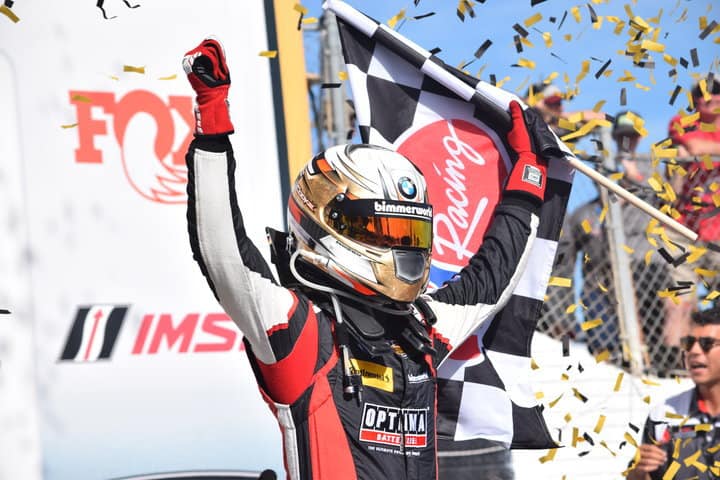 BimmerWorld Racing’s Tyler Cooke and James Clay took advantage of pit strategy and good pace to take their first overall victory in Friday’s FOX Factory 120 at Road Atlanta.  The win comes in the final race in which the series will be known as the Continental Tire SportsCar Challenge.  For 2019, the series will become the Michelin Pilot Challenge.

“My car was awesome,” Cooke told Frontstretch after the race.  “Right when we rolled off the trailer, the [BimmerWorld Racing] guys gave me a great car.  James [Clay] is in my ear, pumping me up, giving me motivation.  This was a total team effort.

“Last time I got a win, my dad was [still] alive,” Cooke continued.  “I remember him calling me right after the win, super excited.  I’m glad that I got the win for him and for the BimmerWorld [Racing] team, and I’m looking forward to what next year brings.”

Compass Racing’s Paul Holton started from pole and was able to beat out Rennsport One’s Spencer Pumpelly to Turn 1.  The early part of the race was a bit slow.  On Lap 2, two separate incidents put the race under a full course yellow.  First, VOLT Racing’s Alan Brynjolfsson spun and was hit, junking the front end of his Mustang.  That crash put Brynjolfsson and teammate Trent Hindman out on the spot.  Later on in the lap, Quest Racing’s Mark Ramsey spun exiting the chicane and got his Mercedes stuck in the gravel.  Ramsey was able to continue.

After the restart, Holton and Pumpelly fought for the lead for a few laps until Pumpelly was able to make the pass stick entering Turn 6 on the far end of the course.  That advantage was short-lived as Pumpelly cut a left front tire just a couple of laps later.  The unscheduled pit stop put Holton back in the lead while Pumpelly was back in the pack.  He was able to get back up to third late, but contact with the Rebel Rock Racing Chevrolet broke the steering rack.  As a result, Pumpelly finished a distant eighth, 28.9 seconds back at the finish.

The overall picture of the race changed on Lap 24 when two separate crashes brought out the race’s second and final full course caution.  First, Ramsey and CarBahn Motorsports’ Tyler McQuarrie collided in Turn 1 and spun, resulting in Ramsey getting stuck in the gravel for the second time.  McQuarrie was in the top five at the time.  Shortly afterwards, Compass Racing’s Rodrigo Sales spun his Audi RS3 LMS Club Sport entering Turn 6 and hit the wall.

The yellow came out just before the 45-minute mark.  As a result, everyone had to hold off their stops to reach the minimum drive-time.  Once that was achieved, everyone stopped for full service, including the all-important driver change.

Most teams couldn’t go to the end from there, which resulted in varied pit strategies.  Multimatic Motorsports left Cole Custer out, giving him the overall lead for the restart.  Compass Racing’s No. 76 McLaren with Matt Plumb aboard won the race off pit road and easily dispatched Custer on the restart for the lead.

Pit strategy decided the day.  Matt Plumb pitted the No. 76 McLaren on Lap 40 with 50 minutes to go.  Here, he took four tires and fuel.  Cooke inherited the lead at that point.  Cooke held off on making his final stop for six additional laps.  During that stop, Cooke took only two tires.  The result was that once the stops were complete, Cooke had an eight-second lead over Matt Plumb.  From there, Cooke was able to hold to take his first career IMSA Continental Tire SportsCar Challenge overall victory.

Championship-wise, TeamTGM’s Hugh Plumb and Owen Trinkler all but had it wrapped up entering the race.  All they had to do to clinch was reach the 45-minute mark.  With that accomplished, the team sat back and coasted to an 11th-place finish, more than enough to claim TeamTGM’s first championship by 25 points over Marcelli and Stacy.

In TCR, it was all about eEuroparts.com Racing’s No. 12 Audi once again.  Tom O’Gorman started from the pole and led without issue to the second caution.  The pit stops briefly shook up the order.  Rumcastle Racing’s Mark Brummond stayed out and took the lead, but Compass Racing’s Britt Casey Jr. snatched the advantage away.

On pace, no one could compete with the No. 12 Audi on this day.  Kenton Koch was able to run down Casey and take the lead on Lap 41 with 48 minutes remaining.  From there, Koch pulled away to take his and O’Gorman’s second win of the year.

Koch and O’Gorman finished seven seconds in front of JDC-Miller MotorSports’ Michael Johnson and Stephen Simpson.  Casey and Tom Long finished third.  Sales’ crash at the 40-minute mark clinched the championship for them, so they could take it easy late.  RS Werkes Racing’s Mikey Taylor and Tyler Stone earned their best finish of the season in fourth, while Lee Carpentier and Kieron O’Rourke were fifth.

In Street Tuner, Nick Galante and Devin Jones were squarely in position to win the class.  Unfortunately, Jones ran a little too hard trying to hold back the Bodymotion Racing Porsche Cayman.  As a result, their fuel tank ran dry late, forcing Jones to make a late pit stop for a splash n’ go.  That gave the lead to MINI JCW Team’s Mat Pombo.  Pombo was able to hold on take the final Street Tuner victory and give MINI the manufacturer’s title.

Pombo and Mike LaMarra‘s margin of victory was considered to be a full lap over the Bodymotion Racing Porsche Cayman of Max Faulkner and Jason Rabe.  Jones and Galante finished third, but that was enough to give them the final Street Tuner championship.