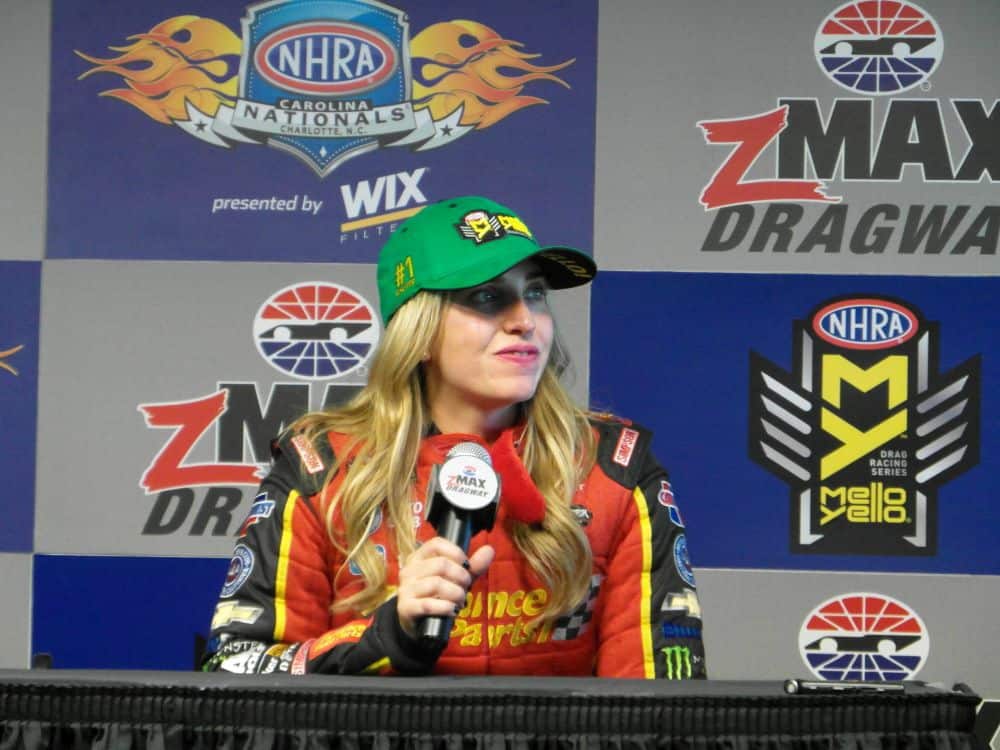 Qualifying is complete for the NHRA Carolina Nationals from zMAX Dragway outside Charlotte, North Carolina. After two rounds on Friday (Oct. 12) and two more on Saturday (Oct. 13), the field has been set for all four Mello Yello Series classes, as well as the E3 Spark Plugs Pro Mod Series.

Steve Torrence looked to continue his total domination of the Top Fuel class, but Brittany Force had something to say about it.

She stole the No. 1 qualifier out from under Torrence in the fourth and final round of qualifying, laying down a run of 3.700 flat to best Torrence’s 3.704 from Friday.

It might have been a favor to No. 2 in points Clay Millican. He had been the No. 2 qualifier, but now he sits third, behind second place Torrence. This puts both drivers on the same side of the ladder, giving Millican an opportunity to gain points on Torrence if he can advance further through eliminations.

Funny Car continued the theme of stealing the No. 1 spot as Tommy Johnson Jr ran 3.873 seconds at 329.10 mph to grab the spot from teammate Ron Capps in the fourth qualifying round. This is Johnson’s second consecutive No. 1 qualifier.

Pro Stock presented a unique opportunity for the No. 1 qualifier that spurred some furious competition to win the spot. With 14 cars entered for the race, the No. 1 qualifier automatically earns a first round bye run. The 14th car, Shane Tucker, broke in qualifying on Friday and did not appear to be returning to the event, meaning there was an opportunity for the top qualifier to also have a bye run in round two, providing a free pass to the seminfinals.

Erica Enders held the spot after Friday qualifying, but points leader Tanner Gray edged her out in round 3, tying her Friday time of 6.518, but posting a faster speed. Enders had an answer for Gray and grabbed the spot back, edging out him out with a 6.517 second run.

In fourth round, the question seemed to be would it be Enders or Gray, but Drew Skillman crashed the party and edged them both out with a 6.509 second run. Enders, with 6.513, and Gray, with 6.516, both improved over round 3 but came up short of Skillman, who won the No. 1 spot.

Eddie Krawiec nabbed the No. 1 spot in Pro Stock Motorcycle, posting a best run of 6.806 seconds at 197.83 mph. He was the only driver to enter the day in the top spot and hang on to it.

Rick Hord ended up atop the standings in Pro Mod with a record-setting 5.681 second, 258.67 mph blast. It’s the quickest run for a turbo car in the history of NHRA Pro Mod and the second quickest for any NHRA Pro Mod.