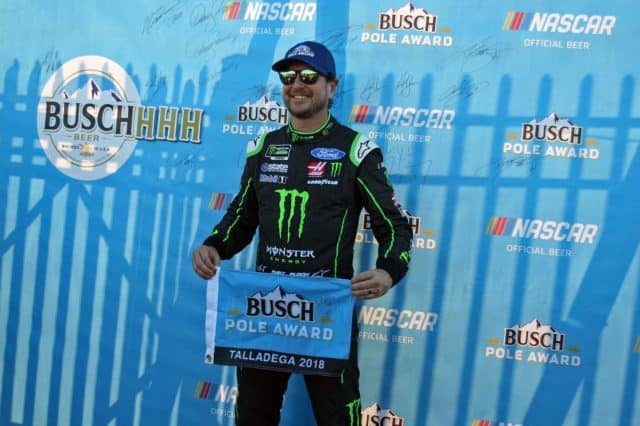 Kurt Busch earned his first Superspeedway pole award on Saturday in Busch Pole Award Qualifying at Talladega Superspeedway on Saturday (Oct. 13). The pole is the 27th in his Monster Energy NASCAR Cup Series career and fifth of the 2018 season.

Clint Bowyer had his first pole since 2007 within reach before Busch came through and knocked Bowyer off much as Kevin Harvick did to Busch in May.

Hendrick Motorsports dominated a majority of the session but had to settle for fifth (Elliott), sixth (Jimmie Johnson), seventh (Alex Bowman), and eighth (William Byron). Kyle Busch will start from ninth, Denny Hamlin in 10th, Martin Truex Jr. in 11th, and Ricky Stenhouse Jr. in 12th.

Notable drivers outside the top-12 include Brad Keselowski, Ryan Blaney, and Joey Logano who seemed to have better speed in practice with the pack.

With 41 drivers qualifying, one car was sent home. That car was No. 97 of David Starr with Obaika Racing. The organization was seeking to make their Monster Energy NASCAR Cup Series debut this weekend but will have to attempt another weekend.

First 4 are Stewart cars, then 4 Hendrick cars and then 3 Gibbs cars in the top 11. Says it all.