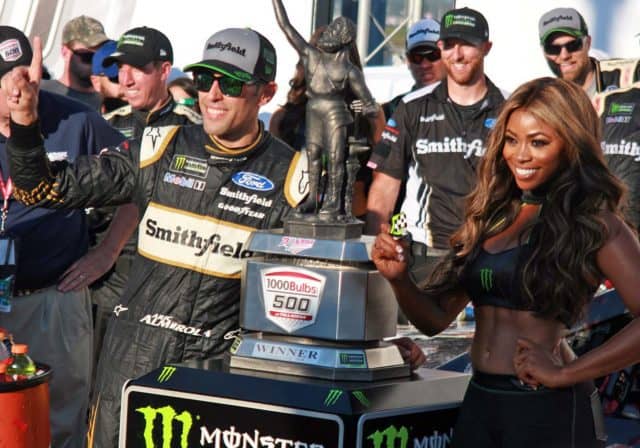 Aric Almirola was able to pick up his second career Monster Energy NASCAR Cup Series restrictor-plate victory on Sunday in the 1000Bulbs.com 500 at Talladega Superspeedway. Almirola passed teammate Kurt Busch on the final lap but stayed in position the entire race and capitalized when he needed to, something he has been familiar with in the past.

When asked about his past experience at Talladega and Daytona, Almirola brought up one race from his past that has helped him in the past at these types of tracks. The 2009 Mountain Dew 250 Fueled by Fred’s.

“I came here in a truck race with Billy Ballew and I had Kyle Busch as a teammate and I had no job that year and was out of a ride,” Almirola said. “And Billy let me run a handful of races that year. I came here and Kyle beat me by an inch. I led a lot of that race. That race was kinda the race that for me, something clicked about Talladega, I learned some things in that race and from that point forward I have always shown up to Daytona and Talladega with a mindset that this is going to be fun.”

The 34-year-old spoke about how that race changed the way he approached the weekends and noted that some drivers enter here with the wrong attitudes. For a driver who has seen so much heartbreak this season, including the Daytona 500, Almirola entered this race with those previous events in the rear-view mirror. After all, today is today.

“A lot of people show up here and they are frustrated that they are racing with restrictor plates, frustrated that we’re pack racing,” Almirola said. “And they come here with the wrong attitude in my opinion. I show up to these tracks anxious but excited and feeling like I’ve got an opportunity. When you look at my career I have won an XFINITY race at Daytona, won an XFINITY Race at Talladega, I won my first Cup race at Daytona and now I have won my second Cup race at Talladega.

“Now, I want to start winning at some of these other tracks so that way people don’t say he’s just a good restrictor plate racer. But today was sweet.”

His first victory in 2014 was clouded with the fact that it was rain-shortened. But on Sunday, Almirola was able to show that he can go to Victory Lane without an asterisk.

His victory came in a clutch moment that sends him to the third round of the playoffs, a place many never expected to see his name just a few weeks ago.

“To go to Victory Lane in such a clutch moment, in the playoffs down 10 points coming into this weekend and knowing that this was an opportunity race for us, winning here today was really special,” Almirola said. “I can count on my hand five or six races that I feel like maybe we should have won this year and it didn’t work out and it didn’t happen and today the good Lord was shining down on us and we were able to go to Victory Lane, so this is a special day.”