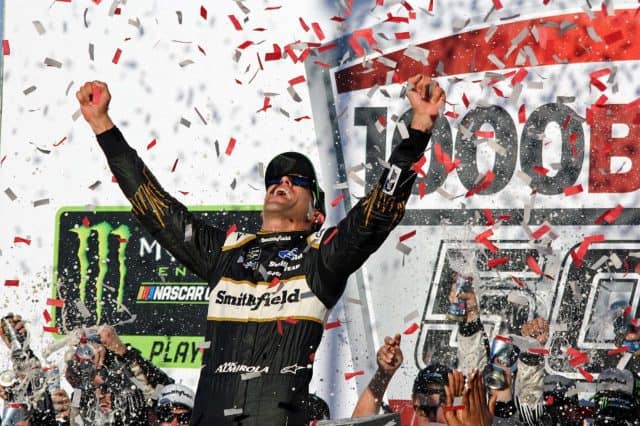 After numerous almosts throughout the 2018 season, Aric Almirola finally won.

The 34-year-old outlasted the field on fuel to take home the 1000Bulbs.com 500 at Talladega Superspeedway on Sunday afternoon (Oct. 14).

Almirola made it to the checkered flag on fuel through overtime while his dominant Stewart-Haas Racing teammates, Kurt Busch and Kevin Harvick, ran out.

“Today, the Good Lord was shining on us, and we went to Victory Lane,” Almirola said. “We did it, finally.”

It’s the second win of Almirola’s career and his first at SHR. His first came at Daytona International Speedway for Richard Petty Motorsports in 2014.

Almirola had been close several times this season. He was leading the Daytona 500 earlier this year until Austin Dillon spun him on the last lap. He also let wins slip away at New Hampshire Motor Speedway and last week at Dover International Speedway.

“I felt like I kept giving it away, and I was so disappointed for all these guys behind me because they’re awesome,” Almirola said. “They’re the best. I’m with the best team in the garage, and I felt like I kept letting them down not winning a race.”

The win marks the pinnacle of Almirola’s comeback. Many questioned if he would still have the nerve to compete for wins following a crash at Kansas Speedway in Spring 2017 that fractured his back and sidelined him for seven races. Coincidentally, Kansas is next on the schedule.

Almirola said this win fires him up about going to Kansas and fuels him to want to win there.

Kurt Busch held the lead most of the race with his Stewart-Haas Racing teammates all behind him. The four SHR cars gapped the field in stage one. Almirola tried to get around Harvick for third at the end of the first stage, but Harvick did not allow his points-needing teammate to have the spot.

The story was the same in stage two, but Harvick led the way this time instead of Kurt Busch, as SHR again took the top four spots. Through the first two stages, the SHR cars ran 1-2-3-4 in all but two green flag laps.

Joe Gibbs Racing briefly had something to say about it. The JGR cars of Kyle Busch, Daniel Suarez and Erik Jones lined up to pull alongside the SHR cars and battle for several laps in the second stage.

Kyle Busch surged ahead of Harvick, but stayed with his teammates instead of pulling down in front of the No. 4. The SHR cars eventually passed Busch back, who then pulled up and elected to move to the back of the field. Busch never recovered.

Brad Keselowski briefly had his shot in the spotlight. The No. 2 took over the lead from Harvick during the stage two caution due to being on a different strategy.

Keselowski got off sequence when he made an unscheduled stop for a vibration with 15 to go in stage one and went a lap down. Keselowski got the lap back through the wave around and spent most of stage two working his way back to 10th. Keselowski didn’t pit during the stage two break and inherited the lead until Kurt Busch’s crew got him out the pits ahead of Keselowski. Busch’s SHR teammates filled in behind him on the next green flag run to root Keselowski back.

Before the last caution, Keselowski, who was in fifth, kept trying to lead a line to run down the SHR cars, but cars around him continually tried to pass him instead of working with him.

“Yeah, the [No.] 88 [Alex Bowman] was in there and he was kind of bonsai, win at all costs and just kept making moves that killed everybody else and didn’t help himself,” Keselowski said. “I kept trying to get my teammates with me, and everytime we about got lined up, somebody would bonsai them, and we just couldn’t do anything.”

Keselowski ran out of gas as the field was coming to green in overtime, ruining his shot at the win and dropping him to a 27th-place finish. He’s now 18 points below the playoff cut line.

Harvick also had to pit as the field took the green for overtime, falling to 28th. Kurt Busch then ran out of gas coming off the final corner, allowing Almirola to cruise by for the win and punch his ticket for the next round of the playoffs.

“[Kansas] is going to be fun. We’re going to go there with no pressure at all and one thing on our minds, and that’s to go win,” Almirola said. “That’s a really fun mindset that I have never experienced in my entire career.”

Up next for the Monster Energy NASCAR Cup Series is Kansas Speedway, the cutoff race for the Round of 8.

Why can’t the winner just drive to Victory Lane instead of the stupid burnouts and unnecessary interviews?

I’m not sure which fans still get off on the burnouts, but it is just another thing that NASCAR must think appeals to the LCD audience. Two interviews are not only not necessary but highly boring. But I’m sure someone in the NASCAR star chamber thinks its a good idea.

It’s Official now: The #10 SHR race car was capable of winning races, it just didn’t have a winning driver!
The Haters were right.