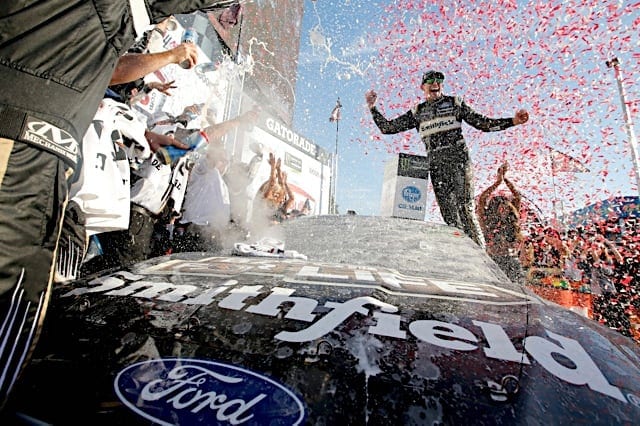 In the last year and a half, has any driver in NASCAR experienced the highs and lows of professional stock car racing more than Aric Almirola?

The scene of Almirola slumped against his battered No. 10 Ford at Dover International Speedway last week seemed to encapsulate a season of lost opportunities.  It was not just a late crash at the Monster Mile that had Almirola down.  He was fast in other races too, particularly at Chicagoland Speedway and New Hampshire Motor Speedway.  Neither of those races resulted in wins.  Not to mention Almirola was about one mile away from winning the Daytona 500 before getting wrecked out of the lead.

Last year, Almirola had to face questions about his long-term future in NASCAR.  A frightening accident at Kansas Speedway left him with a broken back.  He was on the sidelines for seven races, while his Richard Petty Motorsports team took a liking to Darrell Wallace Jr.

Of course, the status of the No. 43 car turned out to be a moot point for Almirola, who got a great opportunity to race with Stewart-Haas Racing in 2018.  But when SHR came out of the gate flying this year, Almirola was a step behind his teammates.  Kevin Harvick won often, Clint Bowyer won early, and Kurt Busch looked more consistent than he had in years, eventually getting a win of his own.  Almirola, meanwhile, showed more speed than he had in the past, but races like Daytona, Chicagoland, New Hampshire, and especially Dover had to take its toll on the No. 10 team.

Finally, it all came together at Talladega Superspeedway.  On a day where SHR could do no wrong, Almirola beat Bowyer to the finish line after Harvick and Busch stumbled.  Almirola’s winless streak of over four years was suddenly broken.

How did he do it?  How did Almirola fight through all the frustration of the last 18 months?

“I knew I had to be patient,” Almirola said in Victory Lane.  “I felt like God was telling me to just be patient and it would come.”

Patience is an appropriate theme not just for Almirola’s season, but for his race on Sunday.  He and the Stewart-Haas Racing drivers were able to plant themselves at the front of the field throughout the afternoon.  They were often able to drive away from the rest of the pack, gapping the field in a style more reminiscent of 1990s restrictor plate racing.

But the plan only worked because the four SHR drivers were committed to staying in line.  They had to line up and stay put to pull away.  Fighting among themselves for the lead would have cost them their track position.  For Harvick and Busch to a lesser extent, staying in line was no big deal.  They came into the race above the playoff cut line, so having their teammates help them get more stage points only allowed them to pad their total points over their competitors.

Almirola, on the other hand, had more incentive to race his teammates.  Entering Talladega below the cut line, he and Bowyer needed to secure stage points more than their teammates did.  But when both stages ended, Almirola stayed committed to pushing his teammates and was the fourth SHR car across the line.  Sure, 14 stage points is a good haul for Talladega, but you never know how many points you might need.

Later in the race, Almirola found himself in the same position, fourth in line behind his teammates.  Yet when it came time to race for the win, being the fourth SHR car was an advantage.  By running fourth in line, Almirola was able to save more fuel than his teammates, which proved to be the deciding factor.

“Johnny (Klausmeier, crew chief) was really on me, from the time we left pit road, about ‘save save save save!’” Almirola said.  “I was doing my part, doing the team thing, running there in line in third, fourth, and saving a ton of fuel, just really being patient with the throttle, running half-throttle as long and as much as I could, and we had just enough fuel to finish the race (and) do some burnouts.”

Patience, again, was the key.  Sunday’s race was unusually placid by Talladega’s standards, but a typically chaotic ending shook up the field in the closing laps.  Busch had done most of the leading among the SHR quartet, and led the field to the white flag with Almirola in tow.  But leading the field had caused Busch to use more fuel.  When his tank ran dry, Almirola was there to capitalize and punch his ticket to the third round of the playoffs.

Finally, the No. 10 team closed the deal.

“I’ve come so close so many times and felt like I kept giving it away,” Almirola said.  “I was so disappointed for all these guys behind me because they’re awesome.  They’re the best.  I’m with the best team in the garage, and I felt like I kept letting them down, not winning a race.  Today, the good Lord was shining on us.”

The truth is that the No. 10 team’s failure to win until Sunday is not one person’s fault.  Almirola has been his own toughest critic in terms of mid-season missteps.  But it is fair to say that he went into 2018 with a good deal of pressure.  SHR has been a team on the rise for several years, and if Almirola had struggled, few people would have directed blame toward the equipment.

It took a lot of patience in 2018, and a little more patience at Talladega on Sunday, but now Almirola is heading to the third round of the playoffs.  That figured to be a pretty unlikely destination for Almirola at the beginning of the year, and nearly impossible last year when he was recovering from his injury.  Just ask Tony Stewart himself how difficult it can be to return to competitive form after a back injury.

The No. 10 team still faces a difficult road to winning the championship.  But no matter what happens in the last five races of 2018, no one should call Almirola the weak link in the Stewart-Haas Racing chain.