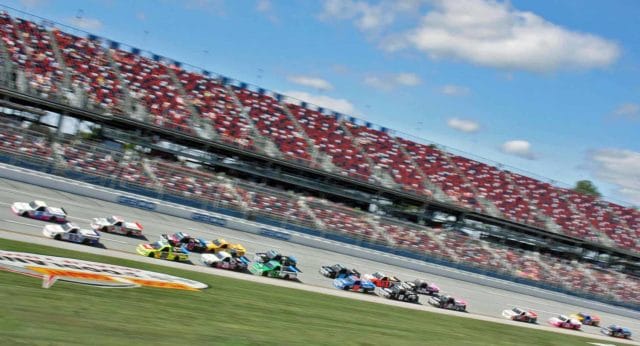 After this past weekend’s race at Talladega, many teams were left to wonder what they could have done differently. Stewart-Haas Racing’s four cars, led by winner Aric Almirola, laid waste to the field, leading 155 of 193 laps.

But there’s a short-term solution to their problem. Sunday (Oct. 14) marked the last race at Talladega, for the time being, with restrictor plates on the cars. Next season, tapered spacers will be used in the Monster Energy NASCAR Cup Series since the sport is greatly decreasing horsepower. The racing is bound to be dramatically different.

Meanwhile, with the insanity we have seen in this year’s playoff races, there’s no longer a clear-cut title favorite. You would think Kevin Harvick or Kyle Busch are still the front runners, but both have had rollercoaster postseasons.

BOWLES: BIG THREE NOT COMING UP BIG IN NASCAR PLAYOFFS

Are they still the top two heading into the Round of 8? Or is the 2018 Monster Energy NASCAR Cup Series championship chase wide open?

Q: After seeing the Talladega race this past weekend, what do you think racing will be like next season at the track with no restrictor plates and only the tapered spacer? – Mindy T., Baltimore, MD

A: This past weekend’s race was very strange. I don’t think any of us have ever seen a race dictated at Talladega the way SHR was able to run it. Even back in the day, when Dale Earnhardt, Inc. dominated up front with Dale Earnhardt Jr. and Michael Waltrip, they didn’t necessarily set the pace for the rest of the field.

It’s sad for me to say a Talladega race was not very good, but it’s true. The race was downright terrible, even though we saw a spectacular finish with Almirola getting his first win of the season.

The current package could have contributed to the lack of action. Many drivers were complaining about the ride-height rule and how it affected their handling all weekend. Or, it could simply have been a case of SHR hitting on a speed-and-handling combination far ahead of anyone else.

Either way, handling came into play at Talladega for the first time in several years. Cars for Daytona used to be built more for that while cars for Talladega were set up for raw speed. Now, it seems you need handling at both tracks.

So, what should we expect next season with no restrictor plates and only the tapered spacer? It remains a mystery. Being that the horsepower is significantly decreased, speeds should be similar to what we saw in the old days where cars would go about 180-185 mph in the draft.

The adjustments are a bit much considering the alternative. All NASCAR really needed to do is change up the plate package a bit and we could have seen a return to good superspeedway racing. We’ve seen those minor adjustments make an impact many times over the past decade.

However, they are indeed taking the plates off the cars, ending this 30+-year “temporary” experiment they’ve had in place. That means 2019 racing at Talladega will be a virtual unknown.

At least they’re using the restrictor plates one last time for February’s Daytona 500. It’ll guarantee at least one more round of pack racing before the competition there is altered dramatically.

Changing up the package is definitely a good move, though. Drivers were struggling to keep up in the pack Sunday (Oct. 14) and that is not how a superspeedway race should be. In the old days, we did only have five to six-car packs, a number that won’t fly with modern NASCAR fans. The expectation is to see 25-30 cars battling for the win and that never happened this time at Talladega.

Whatever NASCAR does to alter these cars for the Daytona 500, I hope it’s a positive change with quality competition.

Q: Based on the playoffs so far, is there a championship favorite anymore or is it purely wide open now? – Benny L., Morristown, NJ

A: At the beginning of the NASCAR playoffs, I would have said Kyle Busch and Harvick were the two top dogs in the title race. They have been the best drivers all season long and it seemed as if that trend was going to continue into the postseason. However, aside from one or two races, that has not been the case.

The championship is wide open at this point, as crazy as that may sound. Harvick had the dominant speed he has shown all season long at Dover but an issue on pit road cost him an easy victory. He has not had the strongest first half of the playoffs at all. Believe it or not, his average finish of 16.8 is just 11th best of the 12 drivers remaining. It’s a virtual unknown how good he will be in the final five races.

Busch, on the other hand, has had an up-and-down postseason. Aside from a win at Richmond, he has not had much time up front. Issues like a broken track bar at Dover and handling issues at Talladega have haunted the team.

The top two in points right now are Chase Elliott and Almirola with their wins in the second round. I am guessing 99 percent of people would not have predicted those two up front at this point in the playoffs, if at all.

Look at the guys that are on the bubble right now: Brad Keselowski in ninth with Martin Truex Jr. right above the cutline in eighth. Yes, these are two guys who have combined to win seven races this season. Keselowski, who won three races in a row just last month, is in danger of not advancing to the Round of 8. The 2012 MENCS champion was a trendy title favorite for critics just a month ago.

And how about Kyle Larson? Larson has had an inconsistent season, to put it mildly. But it seemed as if his team was getting its act together as playoff time approached. Larson dominated the race at the ROVAL just a few weeks ago until getting caught up in a late-race wreck involving 10 other cars.

That moment started the downfall of Larson’s playoff run. Dover was not strong for him and Talladega was a race of survival after a midrace spin. He had a strong come-from-behind effort, running 11th, but he is now on the outside looking in.

Truex was a part of the Big Three most of this season and now he is barely ahead of Keselowski, with only 18 points separating them. It just goes to show that in the NASCAR playoffs, anything can happen.

With Kansas on the horizon this weekend, another elimination race could shake up the title race. It likely will not be as wild as the ROVAL but the craziness factor should still be in place. Then, to open the Round of 8, teams will visit the short track of Martinsville. That’s a track with a wild card factor of its own.

The bottom line is it feels like there’s no longer a true favorite for the championship. You will want to stay tuned to the final five races of this season as the 2018 MENCS title is completely up in the air.

“A return to good superspeedway racing”? Not until they take away the aero and get the cars back into a stock configuration like they were prior to restrictor plates.

If there would have been Chevrolets dominating like the Fords did Sunday everything would be fine. Right?

Actually Brandon, the tapered spacer engines should have about a 100 more horsepower than the plate engines, that and they will have a different aero package. Supposedly they should run about the same speeds they run now, also having more throttle response due to the increase in horsepower. The card will be slower at tracks between a mile and 2 miles because of the tapered spacer and aero package like they used in the all star race.

I say return the cars closer to actual body lines of the street car and get away from the common template to where all the look essentially the same. A camaro or mustang do not really look like the street version because of the common template and NASCAR trying to make the cars equal with close to equal horsepower……they have made it like IROC which sucked, NASCAR themselves have too much control and have fun longtime fans off because of this.