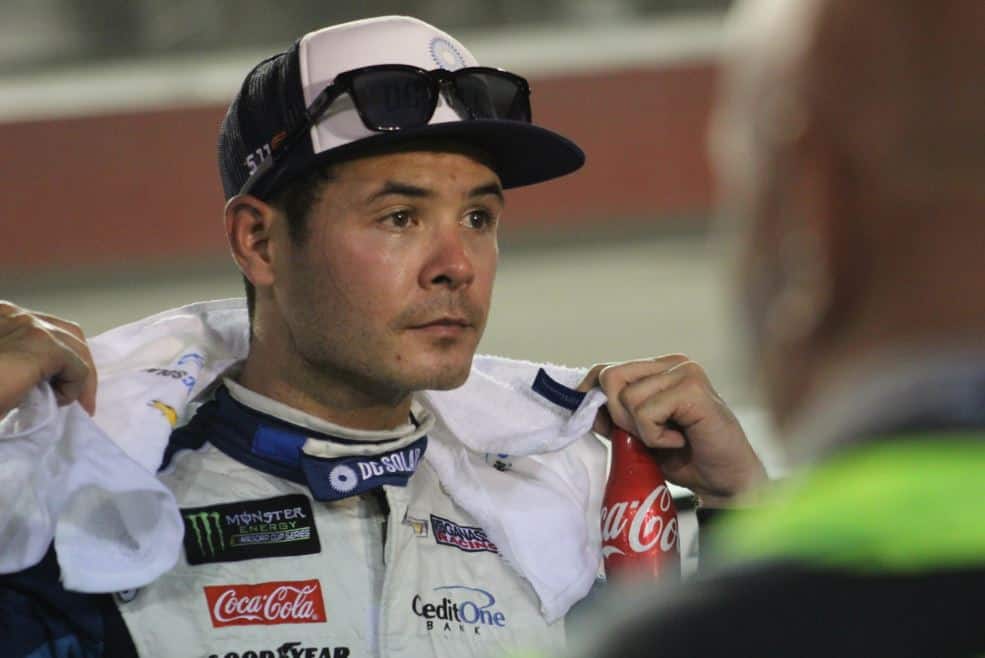 Gone are the days when NASCAR drivers would race until they couldn’t find a ride anymore. From Tony Stewart to Kasey Kahne, more and more drivers are calling it quits at a younger age to race elsewhere. The trend leads to this week’s question: Is it bad for NASCAR that so many drivers are leaving?

Come Out (of NASCAR) and Play

Kyle Larson caused quite a stir earlier this summer when he admitted that racing in NASCAR is not his end goal as a driver. What Larson was implying is that he needs the financial security that a successful career in the Monster Energy NASCAR Cup Series provides and once he’s made enough money, he will be able to finance his true passion — racing open-wheel cars on dirt.

This is exactly what NASCAR does not need its top stars saying.

The backlash from NASCAR, as well as his own team, was swift and negative. Larson ended up self-imposing a gag order to keep from getting any further grief from fans, sponsors or the sanctioning body. But it isn’t like we can un-hear what he said. He made his true feelings pretty clear with his comments.

When Tony Stewart retired from competition in the Cup Series, he made no attempt to hide the fact that his decision was almost entirely based on three factors. First, he loathed the media obligations placed on Cup superstars. Secondly, he hated the fact that the cars became so aero-dependent as he felt it minimized driver skill and turned them into glorified steering wheel holders. Lastly, he longed to return to racing sprint cars on dirt.

Others have followed in his footsteps of late. Kasey Kahne, while being forced to step away from NASCAR due to medical reasons, has revealed his intentions to get behind the wheel of a dirt car as well. Numerous active and retired NASCAR drivers still make appearances in other series. This does great things to improve the visibility of those tours, but when they walk away because there are greener pastures elsewhere, one begins to wonder how much future star power stock car racing will lose and how difficult absorbing those defections will be.

No matter how you try to call the situation, there are fans who will hear the comments and think Stewart retired because NASCAR stinks and dirt racing is way better. The perception that dirt racing is superior is the real issue here. Many fans already struggle with stages, playoffs, etc. — viewing much of it as gimmicks designed to create drama where there would otherwise be none.

Now, even the participants are saying they want to jump ship because NASCAR is no fun. How can we expect fans to hang around when the drivers are essentially confirming most of the complaints?

I’m not blaming the drivers. They deserve to be happy and race whatever they enjoy. But NASCAR needs to make moves to draw drivers and fans of other disciplines to stock car racing rather than send them running away from it. -Frank Velat

Not everyone works equally well at each discipline, as while they all have the same basic goal — going as fast as possible — the methods used to do that can vary greatly and don’t necessarily transfer all that well (just ask any of the IndyCar drivers who tried to switch to NASCAR).

It isn’t ideal for NASCAR that drivers are leaving to focus on different styles of racing, but I don’t think they ought to be that concerned about it either. Drivers make the most money in the Cup Series, so if they do well enough to run Cup for about a decade and then get bored, okay, they have the money to do that.

Kasey Kahne mentioned that the closed cockpits that stock cars use played a factor in his retirement, which won’t be a problem in sprint cars. He runs his own sprint car team, and why shouldn’t he have fun driving them if he wants to? His competitive career in Cup arguably ended when he went to Hendrick Motorsports in 2012.  Then there is his desire to spend time with his son Tanner.

Kyle Larson has made it clear that he’s only racing in NASCAR because it pays, and if he wins a championship, he’ll promptly retire and run the World of Outlaws dirt series. I’m not sure he’ll win a title with his current team, but I can’t see him in NASCAR much past 30.

That doesn’t speak all that well for NASCAR, but it’s Larson’s decision. He grew up racing on dirt, and he had enough talent to switch to asphalt and full-bodied vehicles and compete at the highest level.

Tony Stewart got fed up with the length of the NASCAR schedule and the demands on his time doing sponsor appearances — he just wanted to drive, and everything else drained all the enjoyment for him. (Also, there was the aftermath of the sprint-car accident from New York and the recovery from various injuries that also played a role in his retirement.) He had a lot of other things to focus on, and it was better for him to devote more time to those matters.

AJ Allmendinger will likely be racing sports cars next season, something he does better than NASCAR. Like Kahne, Allmendinger never quite lived up to his potential in the sport and had been a basically-invisible medium-pack driver for the past several years. Eventually, teams lose patience, and that’s the reason why JTG-Daugherty Racing is putting Ryan Preece in the No. 47 next year.

But while these Cup drivers are leaving for other forms of racing, there are even more in the wings like Preece, wanting to race Cup more than anything. Christopher Bell came from dirt racing just like Larson, and he’s stated several times that he’s ready to go Cup racing. He’ll still be in XFINITY next season.

Noah Gragson‘s promotion to JR Motorsports could result in a Cup ride sooner than later. John Hunter Nemechek and Todd Gilliland hope to go Cup racing eventually, and their family history with the sport provides a built-in boost when it comes to fan recognition.

Current young Cup drivers like Chase Elliott and Ryan Blaney haven’t been super successful due to the excellence of veterans, but they’re very good racers and want to be there. Blaney, in fact, comes from a dirt racing family — his grandfather used to and his father and uncle still do. Yet the younger Blaney races in NASCAR and has rarely raced on dirt.

K&N West driver Hailie Deegan started out in her father Brian’s tire tracks on dirt racing trophy trucks, then decided that maybe NASCAR was a better fit for her.

I don’t really enjoy football, though I grew up obsessed with the sport. It’s ingrained in the culture of where I’m from, so I understand it through osmosis. Racing will never take the place of football in American culture. I also follow hockey, which is considered strange, and I can’t always explain its intricacies when people ask questions, but the teamwork aspect appeals to me somehow. In college, I played a variety of intramural sports, mostly poorly, though I did best at volleyball and Ultimate Frisbee since they fit my skill set better.

Competition is interesting no matter how it’s defined, and if racers feel like they can excel better at a different discipline, they should feel free to pursue it. -Wesley Coburn

12 thoughts on “2-Headed Monster: Is It Bad So Many Drivers Are Leaving NASCAR?”