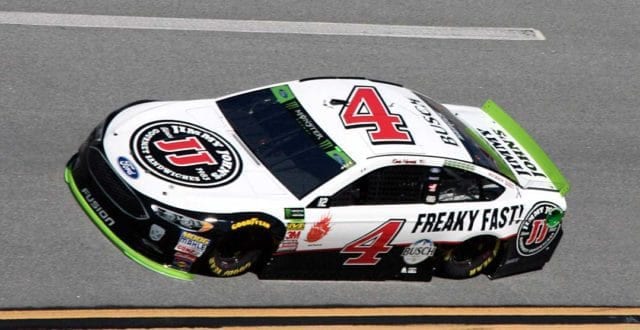 Better day ahead in Kansas than Talladega for Kevin Harvick? (Photo: Christian Koelle)

The final race in the Round of 12 for the Monster Energy NASCAR Cup Series playoffs starts this Sunday (Oct. 21) with the Hollywood Casino 400 at Kansas Speedway. The green flag flies at 2:30 p.m. EST on NBC. Championship contenders will be battling with those still seeking a ride in 2019 on this 1.5-mile oval in what’s bound to be one of the more competitive playoff races of the season.

Also, with only 0.1 points awarded for each lap led by a driver, the need for a dominator is less important when building a winning lineup. This 267-lap race will only have a total of 26.7 points up for grabs in this category. Take note when building your roster and focus on midpack drivers who can climb up toward the front on race day.

Harvick is the most recent winner at Kansas. He led 79 laps from the pole on his way to the checkered flag back in May, the third of his career at Kansas and first since 2016. Harvick has finished inside the top five in seven of his last 10 races at the track. He’s got a strong track record at intermediate ovals that’s only strengthened this year with Stewart-Haas Racing’s performance.

All but assured a spot in the Round of 8, Harvick is one of the favorites to win heading into the weekend and is once again the most expensive driver on FanDuel.

Truex has been the best driver at Kansas over the span of the past three races. He swept both races at the track in 2017, leading over 90 laps in each. The 2017 series champion then followed that up with a second-place finish in the spring of 2018. These 1.5-mile ovals are where the No. 78 team has been at their best.

Truex is not yet locked into the next round of the playoffs, sitting on the cutline. A win would be huge for that team heading into the Round of 8.

Keselowski is just a few weeks removed from winning three in a row. His victory at Las Vegas Motor Speedway in the first round of this year’s playoffs was at a track with similar characteristics to Kansas.

The problem now is Keselowski sits below the cutline after a tough race at Talladega. But even though he has struggled in the Round of 12 to this point, don’t overlook the 2012 Cup Series champ. He was runner up at Kansas in the spring of 2017 and then finished inside the top 15 in the following two races. The No. 2 team will put their best foot forward in their bid to make the Round of 8.

Blaney wrecked at Kansas earlier this year after leading 54 laps. He had one of the best cars that weekend and would have raced for the win if not for a late-race incident with Kyle Larson. Blaney has been successful at Kansas since moving to the Cup level, posting four top-1o finishes in seven career starts. He finished fourth after starting on the pole in the first race of 2017 and then ran third after starting dead last in the fall race.

Bowyer has not been as dominant as one would hope for a driver priced this high, but he has some upside this week. In the Round of 12, he has finishes of 35th and second. But his 35th-place result at Dover International Speedway was also no indication of how he was running throughout the race. Bowyer’s average running position was fifth place, and he would have finished there if it had not been for a late-race wreck.

Bowyer will also be racing to keep his playoff hopes alive this weekend. Kansas is his hometown track and Bowyer desperately wants to win there. His track record may be middling but a ninth-place finish in the spring of 2017 for his Stewart-Haas Racing team shows he can contend here.

Almirola finally got the monkey off his back at Talladega last weekend. After having a top car many times this season only to fall short late, he sealed the deal with his first win of the season. Almirola is locked into the Round of 8 and will have nothing to lose this weekend. He has two straight ninth-place finishes at Kansas and should have a top-10 car on Sunday.

The theme of cutline drivers continues with Bowman, who needs a win to move on to the next round of the playoffs. While that may seem to be out of reach, expect some kind of alternate strategy from the No. 88 team in order to give Bowman a chance late in the race.

No matter what, Bowman should be a top-15 driver regardless. He finished seventh in 2016 at Kansas while filling in for Dale Earnhardt Jr. and then finished 18th earlier this season. 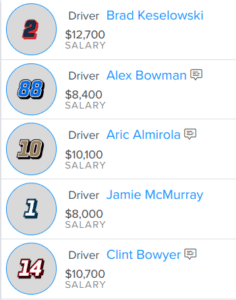