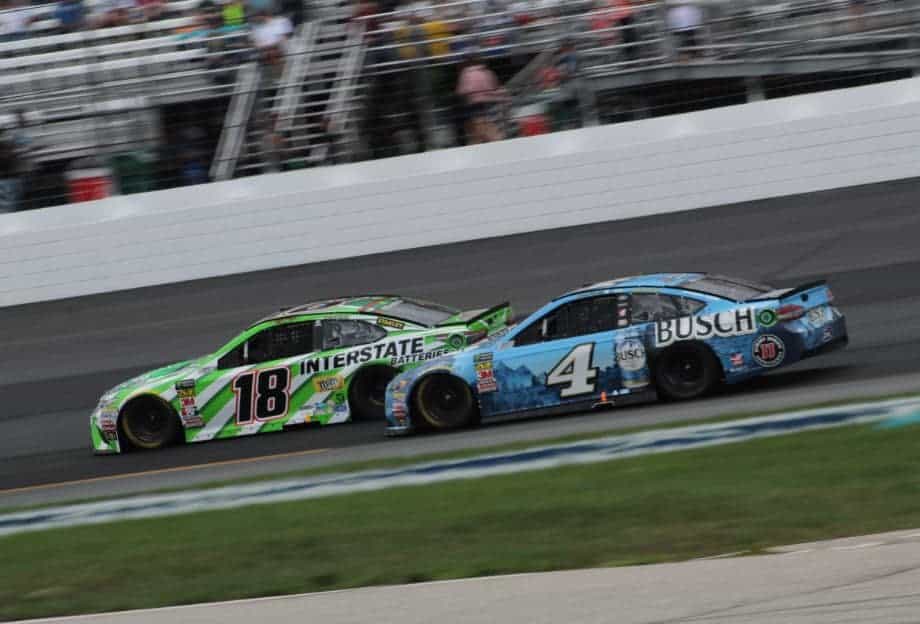 Did You Notice? … The Big Three have yet to dominate in the playoffs the way they did during NASCAR’s regular season? On paper, the points look good for Kevin Harvick, Kyle Busch and Martin Truex Jr. They’ll each advance to the Round of 8 at Kansas Speedway unless there’s some major catastrophe.

But this trio has combined for just one postseason win halfway through the NASCAR playoffs. Five races in, they’ve combined for just four top-five finishes while racking up two DNFs. Their average finish is also middling compared to other playoff competitors.

You read that right: Harvick, the current point leader by 17, is only ahead of Bowman in average finish. 11th out of 12. How is that possible?

The answer comes in how many bonus points this trio has above the rest: 58 (Harvick), 50 (Busch) and 38 (Truex), respectively. It affords them a level of cushion that basically equates to two byes before needing to step up and compete in the Round of 8. They’ve also learned how to play the game with in-race stage points. In this round alone, Harvick’s accumulated 38 to lead all drivers; take those away and he’s at least within striking distance of the cutline. Crew chief Rodney Childers also wouldn’t have played it so safe at Talladega, pulling Harvick down pit road late when he worried the No. 4 would run out of gas.

Certainly, Harvick has been out front quite a bit, leading 332 laps in the last two races alone. But self-inflicted mistakes like Dover’s broken valve stem have kept him from getting end-of-race results. It’s the conundrum of this new system, awarding drivers for a 21-0 lead in the second quarter even if they give it up by the finish. I think most people appreciate the aggressiveness produced by the stages but are the bonuses proving to be a bit much?

Look, no one will argue this group combined for a dominant regular season. However, their ability to skate through these playoff rounds builds a case NASCAR’s postseason is too long. Let’s look at Larson as an example. He’s rebounded to have the third-best average finish during these playoffs! The No. 42 team is doing what they should be to get back into the mix despite some in-race disasters.

But unless there’s a Kansas miracle, Larson will be pushed aside. His regular season (and associated bonus points) just wasn’t good enough. The stage and playoff points come with them that built-in protection, albeit one that disappears completely in the winner-take-all, Championship 4 race at Homestead.

Note that the first year of NASCAR’s stage system (2017) didn’t play out that way. Truex won the title with four postseason victories and a flashy average finish of 4.3. But the longer these tweaks to the format have been in place, teams learn to work the system. Just like the four-car freight train in Talladega, strategy is taking center stage. And strategy, of course, doesn’t always lead to breathtaking competition.

That said, I do think drivers are getting the wrong impression when they’re not getting asked questions in the media center. In many cases, they’re being brought in so fast these days there’s not a whole lot of people there to ask them. It happened at Dover, when I was one of only two people to ask Denny Hamlin a question in the media center. Joey Logano got away scot free without anyone raising their hand.

Why does that happen? Simple: most of the full-time writers covering the sport are busy scurrying around on pit road. Those who aren’t are either reporters on tight deadline, spewing out the bare bones basic race recap or locals/amateurs less likely to ask the first question. And these drivers have also popped into the media center after having pit road availability. (Reporters who remain inside can hear quotes on TV first and transcribe those interviews for quick turnaround).

Even when experienced reporters are available and back from the scrums they may also have already gotten their question answered. There’s no need for a repeat performance, typically once they get back inside. But the media has to realize the end result looks bad on our part to the drivers. They’re getting herded into this room, pushed for comment, only to be greeted with a few blank stares. I’m sure it makes them feel like, in some cases, reporters aren’t doing their job.

In the case of Frontstretch, we had the bandwidth of multiple reporters at Dover so I could send them out on pit road while staying in the media center. But we don’t always have that manpower and that’s increasingly rare in this sport.

Bottom line, NASCAR has to find a way to streamline post-race so both the drivers and media feel like they’re getting the most out of the process. For awhile now, that hasn’t been happening.