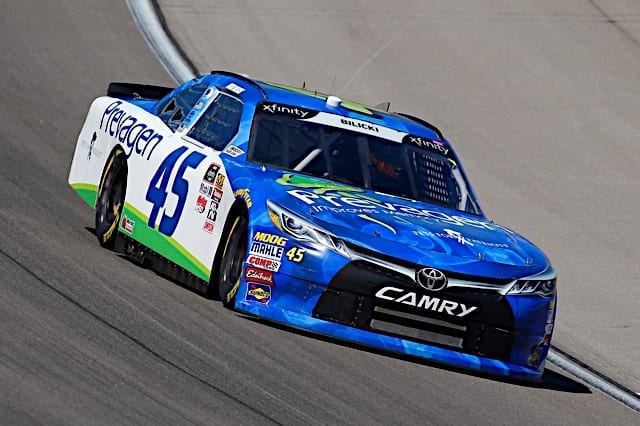 There are sure to be growing pains whenever a new team owner enters NASCAR. That’s exactly what Jerry Hattaway, co-owner of JP Motorsports, is discovering in 2018.

“It’s just something I wanted to do — it’s something that was poking at me,” Hattaway told Frontstretch of starting a first-year team. “I could have probably just been a crew guy, but from all my years of being in business at a young age and building our company in California to what it is, it’s kind of hard to work for somebody and easier to work for yourself.

“I’m here to build something, so that’s what I do. I’m here to build a team, and I want to do this. It started with we were only going to run one car, that was the plan, but with the way sponsorship money came through the door and drivers, it worked out to where it was almost we had to run two cars to do what we wanted to do.”

Before the season began, JP Motorsports purchased chassis from TriStar Motorsports, which shut its XFINITY doors following the 2017 season. The plan was for Stephen Leicht to drive the teamʻs primary No. 55 car, but Josh Bilicki brought sponsorship money from Prevagen to field the No. 45 car, and form a second team.

Bilicki failed to qualify for the first two races of the season, Daytona and Atlanta Motor Speedway, but he’s since competed in all 26 events, earning a best finish of 20th at Mid-Ohio Sports Car Course in early August. The No. 55 has had seven drivers split time in the ride, with Leicht having the best finish of 15th at Daytona.

They are an organization that is severely underfunded, home to 12 employees and currently sitting 35th and 38th in points, respectively, in the owner’s standings, and operates off roughly nine total chassis — some of which are covered with the new composite body, others are heavier with the steel templates.

Hattaway knows getting his team to the promise land is a work in progress.

“We’re not looking to break any records this year,” Hattaway said. “We’re looking to get our feet in the door and figure out our do’s and don’ts and go from there… We’re crawling right now, and we’ll be walking here soon. Next year, we’ll have our feet in 100 percent and give it another go and see if it works out for us.”

He admits that JP Motorsports doesn’t go into the weekend with a game plan and the team is not “100 percent prepared.” It has indeed been more challenging than what Hattaway believed it would be by diving headfirst into XFINITY competition.

“There’s a lot of ups and downs — more downs than there are ups — but it’s like any business, you’re going to start from the bottom and hopefully work your way to the top,” Hattaway said. “This isn’t something I’m going to learn in one season. It’s probably going to take multiple seasons before I really get it down to the science that it is. All you can do every day is to make yourself better, and that’s what we’re trying to do.”

In 55 total races as a car owner, both the Nos. 45 and 55 have average finishes of 30.6 and a staggering 23 DNFs. However, he confirms that none of the DNFs have been start-and-parks, as he doesn’t “believe in that.”

Just putting two cars on the track is considered a successful weekend for the team owner.

“For years, [people] told me, ‘You can’t do it. You won’t be able to do it,'” Hattaway said. “I’ve always been really strong-minded, and if I put my mind to something, I’ll find a way to figure it out. We’ve succeeded to this point… If it doesn’t work out for me, I’m okay with it, I really am. The high point is we’re still here and going at it when the talk around the garage is that we would fold after the first five races. We’re still standing.”

On the other hand, Bilicki, 23, is no NASCAR veteran. Coming into 2018, the Wisconsin native had just nine starts in the XFINITY Series, four of which were at road courses. He also had two Monster Energy NASCAR Cup Series starts to his credit.

Despite his inexperience, Bilicki is also trying to prove he belongs in NASCAR.

“I think we are proving a lot of people wrong,” Bilicki said of JP Motorsports. “A lot of people said we couldn’t make it, and we’re still here. I’m just looking forward to finishing the season strong… There are going to be points where it gets really hard, and the important thing is to keep your head down and working hard and get past those points. It makes you stronger for your next obstacle.”

Much like other small teams working with a limited budget, sometimes JPM doesn’t buy tires until it gets to the racetrack. Typically, the car doesn’t fit in the hauler fully assembled, meaning the team has to put the side-skirts on the racecars at the track, while also putting on official race-sized tires upon entering the gates.

For the team, success isn’t measured by results in its first year, just finishing the race.

“Even if we came in last place, we finished the race. What more successful can that be?” Hattaway said. “This is the second biggest series in NASCAR. We bring two cars, put them both in the race, got them through tech, ran them around the track with 38 other cars and you brought your cars home clean. That’s a successful day. All the other stuff doesn’t mean anything to me, honestly. I’m here to do one thing and that’s just race cars.

“It’s nice to have wins and a lot of top 20s — it’s always great, but what makes it greater is when you don’t and all of a sudden you get one. It’s those things where, if you’re winning every single week, there’s almost no glory anymore because you’ve already tackled it and you did it.”

Every race team starts off small. Hell, had it not been for Geoffrey Bodineʻs victory at Martinsville Speedway, it’s possible Hendrick Motorsports wouldnʻt exist today.

But for JP Motorsports, the goal is to grow the program into a top-10 XFINITY team, though that could take “five to 10 years,” if not more.

“The big saying around the garage is if you want to go fast, put all the money into it,” Hattaway said of how he wants to grow his team. “The more money you spend, the faster you go. We’re solely on our own, and we’ve hurt some because of that, too. But it’s something I believe that I want to do. There have been a lot of times that it’s been miserable, where you almost want to throw in the towel, but you don’t. There’s something in you that says, ‘Keep doing it.’ That’s what we’re doing.”

When asked if Hattaway has wanted to throw in the towel on the NASCAR side yet, he said, “I’m sure any team here will tell you at one time they were ready to throw in the towel because it’s life, and when it throws you a curveball and you’re not ready for that curveball, you either catch it or you let it go.”

As for Bilicki, he, too, believes Hattaway expected a lot for his first season in the garage as a team owner. But it’s all coming into fruition with four races remaining in 2018.

“I think his expectations may have been a little too high at the beginning of the year, and he got a reality check early in the season. I think he learned a lot this whole season, and it’s going to help him for next year.”

Bilicki mentioned he’d like to be back with JP Motorsports in 2019, but it’s sponsorship dependent.

Meanwhile, Hattaway is already prepping his team for next year.

“We’re already building cars for next year,” Hattaway said. “We’ll be locked into Daytona, so I’m anxious to do that. We’ll go from there. Hopefully, we’ll be better and draw more attention to us.”

Hathaway is a scumbag shady as hell owner. First the dude gets his own employee suspended just because the employee was defending himself against Hathaway’s racist remarks at Dover in Mays Then he lied to Dylan Murcott about him racing for them at Road America when his name wasn’t entered.