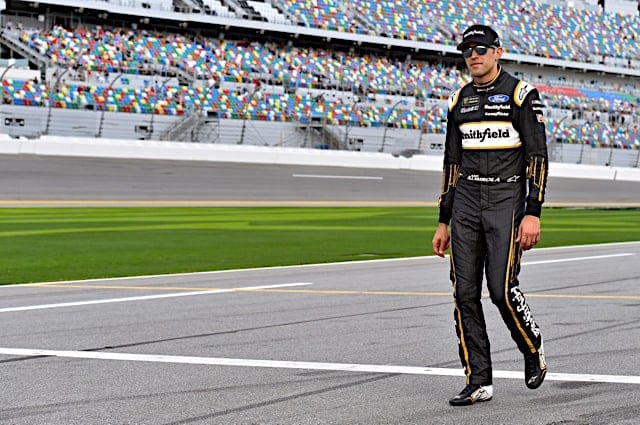 Monster Energy NASCAR Cup Series drivers took to Kansas Speedway for a pair of practice sessions ahead of Sunday’s Hollywood Casino 400 on Saturday.

Talladega winner Aric Almirola posted a 186.683 mph lap to take the top spot in the first session, narrowly edging Erik Jones, who was one of only two non-playoff drivers to break into the top 10. Martin Truex Jr. was third-quickest, followed by Clint Bowyer. Kyle Busch rounded out the top five.

Four playoff driers failed to crack the top 10. Brad Keselowski ran 12th. Kurt Busch was 14th-quickest, just two positions ahead of teammate Kevin Harvick, who was 16th. Chase Elliott, who’s already locked into the Round of 8 was the lowest playoff driver on the speed charts in 22nd.

Kyle Busch paced the 10 consecutive lap average charts ahead of Harvick. Blaney, Keselowski and Larson rounded out the top five.

The only issue in the first session was when Jamie McMurray‘s No. 1 Chevrolet started smoking heavily coming through Turns 3 and 4. After the extended cleanup for fluid on the track, NASCAR extended the session by five minutes.

Smoke continues to plume from the No. 1 car of Jamie McMurray.

He’s looking for a good showing at his home track. #NASCARPlayoffs pic.twitter.com/C7F5NDwYKc

McMurray will give up a 20th-place starting spot after the motor change.

Meanwhile, after the XFINITY Series teams qualified, teams took to the track for one more shot at setting up their cars ahead of Sunday’s race. Kurt Busch led that practice with a 186.226 mph lap, and he was closely followed by Jones. Almirola was third-quickest, followed by Kyle Busch. Paul Menard rounded out the top five.

Blaney ended up sixth, just ahead of teammate Keselowski. Bowyer was eighth followed by Bowman. Truex rounded out the top 10.

Polesitter Logano ended final practice 12th-fastest and was followed closely by fellow playoff driver Elliott. Harvick was 16th-quickest, while Larson was the last of the playoff drivers in 20th.