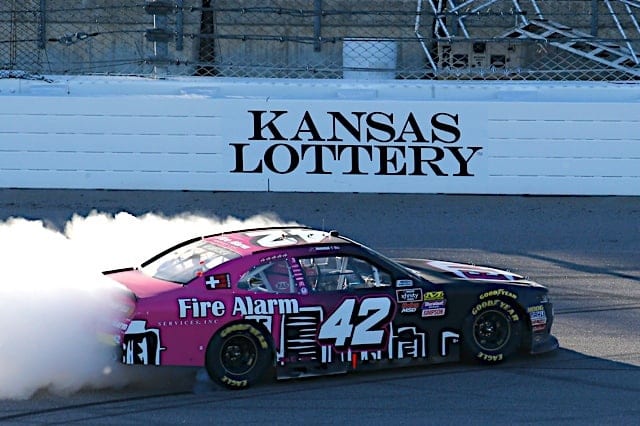 John Hunter Nemechek became the third driver this season to park the No. 42 Chevrolet Camaro in Victory Lane for Chip Ganassi Racing, winning the NASCAR XFINITY Series’ Kansas Lottery 300 at Kansas Speedway. It was his first NXS win for his career and the sixth for Ganassi in 2018.

Daniel Hemric, who started on the pole and led a race-high 128 laps finished runner-up after struggling with a vibration on the final green flag run. Elliott Sadler, who took two tires under the last caution was third, followed by Shane Lee, who finished a career-best fourth. Tyler Reddick rounded out the top five.

On the restart, Brandon Jones tried to side-draft Hemric and lost control on the backstretch. Jones smacked the backstretch wall, then clobbered the wall in Turn 3. The crash brought out another yellow and ended Jones’ day.  Hemric stated on the radio that he thought Jones simply turned his wheel too far to the right after the side-draft and wrecked himself.

On Lap 25, Gallagher’s right front tire exploded, sending him hard into the wall and out of the race. He would finish 33rd.

Hemric held off a charging Nemechek to win the first stage. Other playoff drivers scoring stage points were Sadler, Reddick and Tifft.

The second stage was mostly tame. Following a spin by JA Junior Avila, Nemechek took the lead from Hemric and won the second stage. Other playoff drivers scoring stage points were Reddick, Sadler and Tifft.

Ryan Preece, running in third at the time, was spun into the wall exiting Turn 4 right at the end of the stage by Joey Gase, who was fighting for the free pass position with Garrett Smithley. Preece’s Craftsman Toyota incurred damage to the front and rear. He eventually worked his way back into the free pass spot before cutting a tire and having to stop under green. He would eventually finish 21st, 11 laps down.

Hemric regained the lead on the stage three restart, and a long green flag run, coupled with a round of green-flag pit stops, lapped almost everyone in the field. Five to eight cars for most of the stage were on the lead lap.

Following the final caution of the day with about 35 laps to go for a stalled Vinnie Miller, Nemechek’s hopes seemed dashed as he was forced to come back down pit road for loose lugnuts and restarted sixth. But he shot out like a rocket on the restart, and Hemric’s car faded, giving the No. 42 the victory.

The XFINITY Series returns to action in two weeks with the O’Reilly Auto Parts 300 at Texas Motor Speedway on Saturday, Nov. 3 at 4:30 p.m. on NBCSN.

One of the most obnoxious burnouts this year.