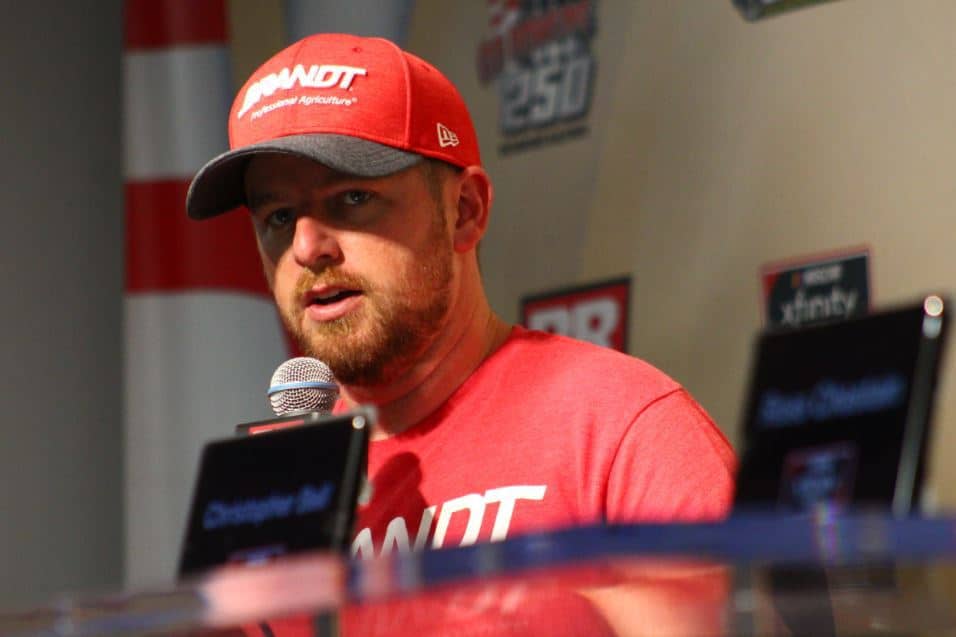 The opening lap of the NASCAR XFINITY Series’ Kansas Lottery 300 at Kansas Speedway featured a massive wreck in Turn 2, taking out multiple playoff contenders and setting up a bizarre first stage.

Half of the #NASCARPlayoffs Round of 8 is involved in an #XfinitySeries lap one wreck. pic.twitter.com/AJi2QMJ9n0

It immediately ended the days of JR Motorsports’ Justin Allgaier, Joe Gibbs Racing’s Christopher Bell and Team Penske’s Austin Cindric, all fighting for the championship, and took out the power steering of Stewart-Haas Racing’s Cole Custer, also a playoff contender.

“It was just a racing incident. You don’t really expect something that big to happen in front of you on the first lap,” Cindric explained after emerging from the infield care center. “It looked like the (No.) 7 (Allgaier) got loose into the (No.) 20 (Bell) and we got collected. It is unfortunate that it happened that early.

“That’s three of the strongest cars being taken out on the first lap,” Cindric continued. “I honestly felt we had a chance to win the race today. I think this hurts me a lot more than it hurts the 20 and the 7 because they had a huge points cushion and I didn’t. It’s that simple.”

For Cindric, the 39th-place finish is a blow to the already vulnerable position he was in coming into the first race in this round of the playoffs. He came into this race dead last in the championship standings and 10 points behind the cutoff line to make the Championship 4.

And just like that, the hole is deeper… Keep digging and we can strike GOLD ?… Hate it for @Team_Penske @Menards to get caught up in that mess on LAP 1, but we’ll keep fighting. Thanks for the support #NASCARPlayoffs

After talking to MRN and NBC, Allgaier waited outside the infield care center to talk to Bell about the incident.

Justin Allgaier wanted for Christopher Bell and the first words out of his mouth we're I'm sorry. #NASCAR pic.twitter.com/K33skmH7Fw

“I hate it for our team, but I hate it for all the cars that got involved as well,” Allgaier explained. “I hadn’t been loose all day and got to the bottom and thought everything was going to be alright. I got to about the two-thirds mark; we saw Larson have the same issue in the Cup car.”

Allgaier leaves Kansas with a 38th-place finish and his fifth DNF of the year.

“It was odd. We weren’t really up to speed yet. Obviously being on the inside, you’re a little more susceptible to being loose,” Bell said, who will be credited with a 37th-place finish. “I heard his motor lift but I didn’t realize he was coming up the racetrack into me.

“We’ve accumulated a fair amount of points that hopefully can get us through this. I still expect to be able to go win a couple of these last three races.

In addition, the first-lap wreck ended the race of JRM’s Michael Annett.  SHR’s Chase Briscoe was also involved and continued briefly before dropping out, along with GMS Racing’s Spencer Gallagher. In Gallagher’s case, he made repairs, then blew a tire and crashed out later in the stage.  Only Ryan Truex managed to continue without a significant deterrence to his on-track performance.