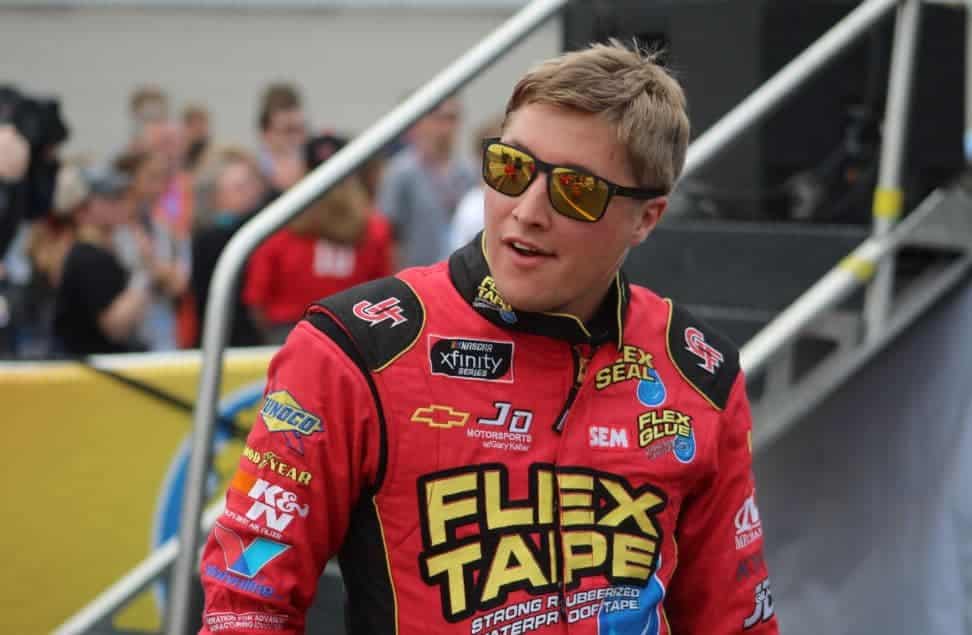 Garrett Smithley’s time in the NASCAR XFINITY Series with JD Motorsports has been spent in the middle of the pack, which ultimately is a win for the small, underfunded organization. In his third consecutive full-time season driving for JD, Smithley has amassed one top five and two top-10 finishes, the best results of his short career.

He sat down with Frontstretch at Las Vegas Motor Speedway to discuss his start in racing, career up until this point and shared some laughs.

Davey Segal, Frontstretch: You got into this game late by NASCAR standards. You started racing in your sophomore year of high school. Why then?

Garrett Smithley: I was always obsessed with NASCAR at a very young age, 2-3 years old. Watched it with my dad. The first race I went to I was 6, it was always passion of mine. I was born in Pennsylvania and grew up in Northern Virginia and racing in those areas just wasn’t as mainstream. And then I moved to Georgia in sixth grade. We started going to some short track races.

What really just flipped my switch was when we went to this amusement park close by to Peachtree City, where we live. There were these go karts, and I always loved going and racing them anyways. But for some reason that day I got on the go kart and took the corner really perfect. Perfect apex, swung out to the wall, and I was like “whoa, that was awesome.” I got off the go karts and I told my parents on the way home, I was like, “I wanna be a race car driver,” and they kind of laughed, you know, at this point I’m 13-14 years old.

But then I found a local racing series at Atlanta (Motor Speedway), for bandaleros and legend cars. I watched the bandaleros and I was like “I want to drive a bandalero.” We lived half an hour from the track, test drove a car after my freshman year of high school in July of 2007. Then I did well in the tests, the kids said I have talent, so we found a local car and started racing.

Segal: By NASCAR standards, it’s kind of late, but all things considered, it’s really not.

Smithley: By industry standards, it’s late. I mean my teammate Vinnie (Miller) in the No. 01, he started when he was 3-4 years old. He started on two wheels with motorcycles and then went to quarter midgets at like 4. I was playing with matchbox cars, probably until I was 15.

I couldn’t imagine gettng in a race car at 4-5 years old. But looking back on it, the age thing was an issue for a little bit, but I’m really glad it played out that way because starting at 15 gave me the maturity to progress faster. Obviously spend less money to do it too, because we didn’t have a lot to do it. If we would’ve started at 5-6 years old, might not have been able to get to the next level.

Segal: You did theater in high school. Did that give you some of the confidence you have now?

Smithley: In middle school—I still think I’m a dorky kid—but I was a really dorky kid. Always wanted to be in the popular crowd, didn’t have a lot of confidence. I was shy, plain and simple.

I started theater when I was 6-7. I took off a little when I moved to Georgia and then got back into it freshman year of high school and it felt really good. I started doing theater and performing again and it built my confidence. I had this friend group in theater, we all became really close. I felt like if I could go on stage singing, dancing and acting, I could have the confidence to go sit in a race car and do that.

It just put me out of my comfort zone where I could go and try racing. And that’s kind of where it started. I feel like a big reason as to why I’m still in a race car is because I’m able to do some things not a lot of drivers do, like public speaking. I relied heavily especially when I first started out in ARCA and getting some publicity, I relied heavily on my personality and how I could talk to the media and do those kind of things that I couldn’t have done without theater.

Segal: Growing up you looked up to Dale Jarrett and Carl Edwards. How’d you pick those two?

Smithley: Dale Jarrett was racing the No. 88 Quality Care car for Yates. It was a red white and blue car. Both my grandfathers were in the military and my parents raised me to be very patriotic. So naturally I see an American flag car, so I’m going to cheer for him. And I got lucky. I didn’t know as a kid, but I was fortunate to pick him because of who he was and first of all he’s a good race car driver, one of the most respected guys in the garage, Hall of Famer now, super nice guy, and I’m really glad he wound up becoming my racing hero.

And then Carl Edwards just for the simple fact what he can do marketing wise, how he conducts himself in interviews and put his sponsors in effortlessly. So much charisma and I looked up a lot to him. And the other thing about him was that he raced for Mittler Brothers, and my first Truck race was with Mittler Brothers. When I met him for the first time, I told him I was with Mittler Brothers, he gave me his phone number and said “hey call me whenever you need anything.” He’s always been sort of a mentor to me. Whenever I need something, I’ll call him and ask him what’s going on.

Segal: I loop you in as one of the guys with all the talent in the world, but you just don’t have the equipment to perform. Do you loop yourself with those guys?

Smithley: Yeah, absolutely. You look at my rookie season in 2016 when Ryan Preece raced with us, we ran with him a lot. We beat him looking at our stats, we were able to beat him a couple times, our lap times were similar. Same with Ross (Chastain). We ran a lot with Ross that year. I feel like given the opportunity I could do the same thing as those guys.

I think it has a lot to do with the guys who have always been in top tier equipment, from Trucks to ARCA to K&N late models, they’re programmed to know what they have. I feel like our half of the garage, I feel like our cars are harder to drive and that’s why guys like Ryan and Ross go and get in those opportunities and perform. They’ve learned how to drive harder than ever and when they get to a car that has the resources behind and all the technology that they have, the shaker rigs, the wind tunnels, all those things we don’t do because we don’t have those resources, he goes in and he wins two stages and leads half the race at Darlington and should’ve won the thing. Would’ve won the thing.

And Ryan Preece, same thing. I think there’s something to that. I think I could go jump in and do something similar, I don’t think I could win the pole at Darlington because Ross is just a god at qualifying. But I feel like I could put that car if not where it needs to run, very close to it.

Smithley: I will say I’ve made progress. Vinnie has a boat, we’ve been out several times this summer. Obviously with the water, you can do backflips a lot easier and not worry about getting hurt. I know you can though, so I’m always safe about it. I feel pretty good about backflipping into the water. Don’t ask me to do it on land anytime soon though.

Segal: Great choice, do you know the song?

Smithley: I know the entire song. If I run top 15 we can sing the ripped pants song and you can tweet it. How about that?

Smithley: Sports car, a Camaro. I consider it a muscle car, though.

Segal: Would you rather be really hot or really cold?

Smithley: Really hot. I hate the cold, can’t stand the cold. I will never complain about 100 degree weather. When I’m cold I can’t do anything.

Smithley: Neither, but if I had to choose, Qdoba.

Smithley: Star Wars, the original ones. I still haven’t seen the Han Solo movie but I have to.

Segal: Favorite artist/group to listen to?

Smithley: The Stix. I don’t listen a lot consistently, but if I had to choose a genre that I listen to most it’s either pop or EDM.

Segal: Is there a pump up song that you listen to before a lift or when you get in your car?

Smithley: Pittsburgh Steelers. But I’ll give a nod to the Wheeling Nailers. They’re an ECH affiliate for the Penguins and they’ve sponsored us for two years now. We got to go up and drive a car on the ice. And my lifelong dream was to drive a Zamboni, so I did that.

Smithley: Washing cars, I just take it through the carwash.

Segal: What’s a sporting event you haven’t been to that you’d like to attend?

Smithley: Any football game at Heinz Field or any F1 race. I’ve always wanted to go to a F1 race. Monaco is top of the list.

Segal: What’s a celebrity crush you had growing up?

Smithley: It used to be Ariana Grande, also Emma Watson growing up, I’ll give her a nod. But since Ariana is with Pete Davidson I’ll say Camilla Cabello.

Segal: What’s a celebrity impersonation you do well?

Segal: What’s a meal mama made for you growing up that you could just pile in loads and loads of it?