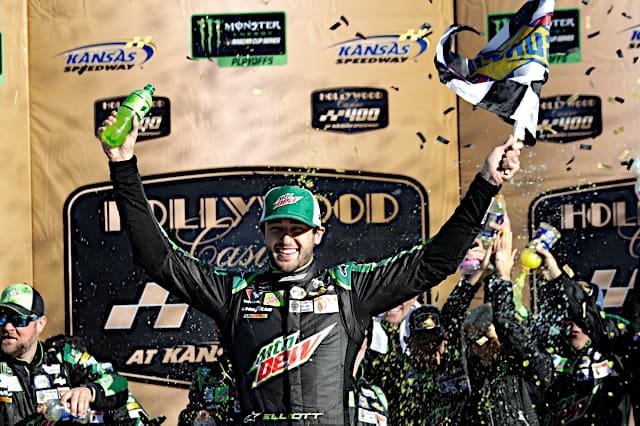 Unlike the ROVAL in September, the elimination race for the Round of 12 at Kansas was missing the epic moments that have come to define critical races in the playoffs. The same four drivers who entered Kansas below the cutoff line were eliminated after Sunday’s race, as none of them were able to put themselves in position to move on.

One of those drivers was pretty high on our Power Rankings.

How did his elimination and Sunday’s race change things around? Find out with this week’s Monster Energy NASCAR Cup Series Power Rankings.

In May, it seemed like nothing could stop Kevin Harvick from winning the race at Kansas. As of late though, the No. 4 car has been on the wrong side of luck. At Dover, a tire going down cost him a victory and at Talladega, he ran out of fuel during the final restart.

This time, it was a pit road speeding penalty that cost him the victory.

Somehow though, Harvick used the points he gained during the regular season and still netted a spot in the round of eight. The key to Harvick making the final four will be eliminating these mistakes in the Round of 8 and keeping it in contention for victories instead of a sixth-place finish.

His dominance in these three races puts him on top of our power rankings.

"Our Busch Light Ford was really fast and leading the race there, and I got a speeding penalty. That was my fault. I tried to get a little too much and wound up going too fast. We will take it one week at a time."@KevinHarvick finishes 12th at Kansas.https://t.co/hPBKNjxGdv pic.twitter.com/xHI5MFQPeT

Chase Elliott has benefited from two of those three mistakes on pit road. Elliott is proving that he can run up front, be consistent, and possibly battle alongside the likes of Harvick and Kyle Busch, perhaps even in the championship race at Homestead-Miami Speedway.

Much like Harvick, Busch had a rough finish at Talladega, but two solid finishes at Dover and Kansas keeps Busch in contention for his second championship. The speed Busch had at Kansas shows that he kept things muffled during the first two races of the round, which he can do considering the good chunk of points he picked up during the regular season.

#RowdyNation, don’t forget u can still enter to ride with me during the remaining races of the #NASCARPlayoffs, just like Linda Ambjor did in Kansas. All u need to do is show how u celebrate me and @mmschocolate using #18N18. Good Luck! pic.twitter.com/2rOaecXtQa

Aric Almirola is making it further than many ever expected and nters the Round of 8 in a slight hole.

If he can pull some playoff points and have solid races at Martinsville and Texas, ISM Raceway was the strong point of this round for Almirola earlier this season where he finished seventh.

"I’m proud of our effort, though. We’ve been bringing super-fast @SmithfieldBrand Fords, and I felt like we had a car that could’ve run top-three or top-five today, but track position was extremely important."@Aric_Almirola finishes 10th. #Almirollinghttps://t.co/jj5aiH8jjJ pic.twitter.com/aXCTNEYv7I

Two straight races where everything went to the cow pasture and Kurt Busch kept his composure, kept the fenders on his car and now his No. 41 team will compete in the Round of 8. In what could be his final four races with Stewart Haas Racing, he’ll need to make it count as there’s a possibility that he could be one of the four cars to represent SHR in the Championship 4.

"We were an elite-eight team when we started Daytona, and here we are, we did it. It was a rough day in the pits and on the track, but we had enough points from the Roval and our stage races."@KurtBusch finishes 18th at @KansasSpeedway. #KB41https://t.co/hZNQsWQhqU pic.twitter.com/uQBNQ9Mdvo

At the beginning of the playoffs, if you’d asked anyone which Team Penske driver would’ve made it this far, it would’ve more than likely been Brad Keselowski. Now both Keselowski and Blaney are on the outside, watching Logano make it into the Round of 8 for the second time in three years.

Logano has been here before and now has the chance to land Team Penske’s first MENCS championship since 2012.

It’s been a struggle this round for Martin Truex Jr. and Sunday wasn’t any better but the finish was what Truex Jr. needed to move into the next round and get a clean slate.

That clean slate is much needed after the Round of 12 put a damper on the “Big Three”, perhaps whittling it down to two if any at all. Kansas wasn’t great but it was a turn in the right direction for the No. 78.

"It's just another day for me and I'll try to get everything I can out of the racecar and see if we can go to Victory Lane."- Martin Truex Jr. talks about his strategy to make sure he avoids elimination in Kansas.#NASCARPlayoffs | #RaceDay pic.twitter.com/jgdbNeI46m

Much like the rest of these drivers, except Elliott, Bowyer had a sloppy day on Sunday, but it was good enough for him to tally enough points to move alongside his three Stewart Haas Racing teammates into the Round of 8.

Martinsville kicks off this round, which is where he picked up the victory in the spring and began the run his team has made towards the playoffs. One of the keys for Bowyer to make the Championship 4 would be taking the victory at Martinsville.

Loved seeing all the farmers at the track today. Met so many great people!! Very proud to represent them all with our @Asgrow_DEKALB 14 car this weekend at home. Let’s do this!!!! ? pic.twitter.com/o9gYVj1kGz

It was an interesting year for Brad Keselowski and it isn’t over yet.

His championship chances, however, came to a close on Sunday and it was because of two finishes outside the top five at Dover and Talladega. Nothing went right on Sunday for Keselowski, finishing sixth when it was the win he needed to move on.

Keselowski could very well go through these next four races as a non-Playoff driver dark horse.

.@keselowski and the 2 Crew opt to stay on track, hoping for a caution that could set them up for a win and a spot in the Round of 8!#GoingFor2 | #NASCARPlayoffs pic.twitter.com/0Y4bgJCBrV

It would’ve been very interesting to see what would have happened if Erik Jones hadn’t been eliminated in the first round. Jones has had three straight top-ten finishes, including two fourth-place runs. Jones has really started to prove that he should be in the No. 20 car and he’s looking to continue the streak of top-ten finishes in points for the No. 20 team.

Getting the @ToyotaRacing #Camry dialed in for tomorrow, speed’s good ?? @craftsman pic.twitter.com/OHYpNPpziy