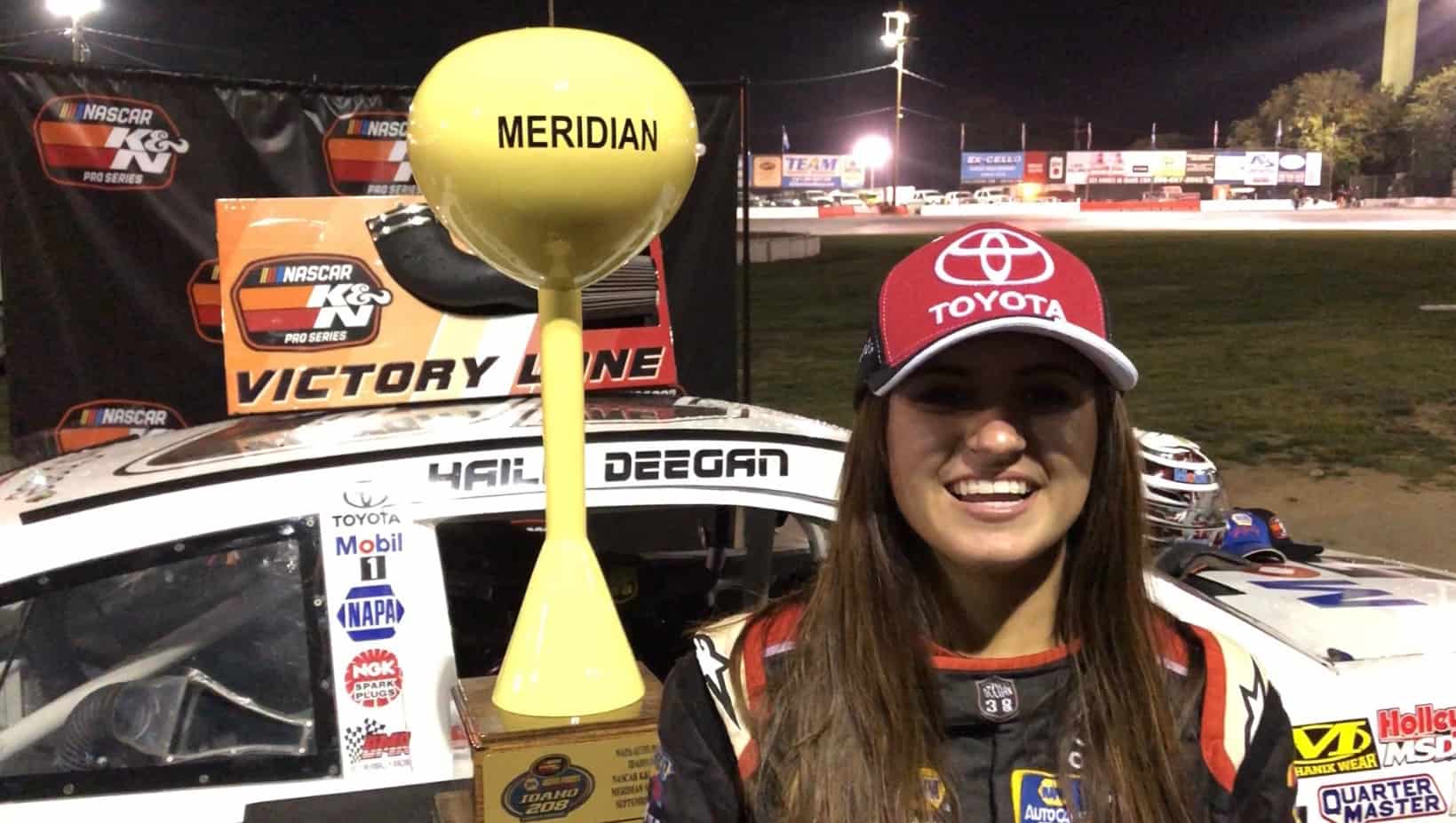 The last name should sound familiar to racing fans, as she’s the daughter of X Games legend Brian Deegan. But unlike her father, Deegan has opted to go a different route: heavy-bodied stock cars.

The Temecula, Calif., native is also a NASCAR Next member and recently earned her first career victory in the K&N Pro Series West, which was the first for a woman in K&N Pro Series history. It came at Meridian Speedway in Idaho, two weeks following her second-place run at the Las Vegas Motor Speedway Dirt Track, where she made history becoming the first woman to win a K&N pole.

The 2018 season has been her first full-time effort driving stock cars on asphalt, as her background has consisted of Lucas Oil Off-Road trucks as well as other forms of dirt racing.

Prior to the K&N West season finale, which takes place this weekend, Deegan has amassed five top fives and 11 top-10 finishes in 13 starts for series juggernaut Bill McAnally Racing.

That isn’t lip service, though. I’ve been privileged to attend the majority of the K&N West races this season and interact with drivers, owners and crew members in the garage area on a regular basis. That includes Deegan, who drives the No. 19 Toyota Camry for BMR.

On the surface, you might think to yourself, “oh, here’s another girl who can allegedly drive. Let’s go ahead and rush her up through the ranks, the next Danica Patrick. Yippee!”

And in all fairness, why wouldn’t you think that? Deegan isn’t the only woman to work her way into NASCAR recently. Natalie Decker, Leilani Munter, Toni Breidinger and Nicole Behar are only a few. Add in Johanna Long and Jennifer Jo Cobb, plus a few others, and all of a sudden you have a plethora of women who have, are trying to or have made their way into NASCAR.

But I’ll go ahead and address the elephant in the room: Danica Patrick.

Love her or hate her, you’ve gotta respect Patrick’s resume. One could argue her marketability played a bigger part in landing longtime sponsor GoDaddy.

Patrick was afforded an opportunity that the aforementioned women were/have not: a full-time ride in top-tier equipment. But one can’t argue that her results were lackluster, to put it lightly. Seven top 10s and not a single top five in her nearly 200 starts with Stewart-Haas Racing are beyond disappointing.

But make no mistake about it: Hailie Deegan is not here to be the next Danica Patrick.

She’s repeatedly said she wants to be the best racer, period. No label as the best female racer, because she’s, well, just a racer.

She isn’t fake. She doesn’t beat around the bush. Her enthusiasm is infectious. She’s real.

Sure, her last name doesn’t hurt matters. But looking beyond the potential connections Brian Deegan could help with, mom Marissa and Brian, like any parents, are some of the most supportive figures in Deegan’s career.

To say @mmgeneral and Marissa Deegan are bursting with pride for their daughter would be an understatement.

The win at Meridian, extensive media coverage and hype surrounding Deegan begs another question: what’s next?

Well, logical progression would suggest the Camping World Truck Series or ARCA. Being shy of 18 years old, Deegan can’t run any tracks over 1.5 miles in the Truck Series. However, short tracks are fair game.

Her teammate at BMR in K&N, Derek Kraus, has been linked to rumors of McAnally going full-time truck racing next year. Kraus and Deegan are both teenagers in NASCAR Next and regularly can be seen sharing a laugh in the garage area on race weekends.

A handful of other drivers will be attempting their NCWTS debuts this weekend. Among them is this year’s K&N East champion, Tyler Ankrum.

Deegan has said she would prefer to not rush up the ladder and take her time perfecting her craft in the lower series. Her plans for 2019 are still to be announced.

But Deegan is the latest conundrum for Toyota, which seems to have too much young talent in its developmental stables. There are only so many spots for a Toyota driver in the Cup Series, and we’ve seen that rear its ugly head.

Bubba Wallace jumped ship from Kyle Busch Motorsports to a Roush Fenway Racing Ford before heading to Richard Petty Motorsports and Chevrolet. Noah Gragson wanted to stay within the Toyota family, but there was no room, so he’ll be behind the wheel of a Chevrolet next season for JR Motorsports.

There have been rumblings of what Toyota will do with Christopher Bell when he’s ready for Cup. Frankly, he is now. But where will it put him? All the seats are taken. What if he wins the XFINITY Series championship? Not to mention William Byron, who won last year’s NXS title for JR Motorsports in a bowtie after jumping ship from KBM.

Performance-wise, Toyota can’t afford to lose Deegan to another manufacturer. As Michael Jordan once said, the ceiling is the roof. Add in her marketability and you have a potential superstar in the making.

Hailie Deegan ain’t like the others. You can take that to the bank. And by the looks of it, she’ll be taking trophies from the competition for years and years to come.

Like all the others as long as the money keeps coming its all going to be sweetness and light. First class equipment, money and family connections what could be better.

Women drivers have won the Snowball Derby. What has that got them? All the talent in the world won’t guarantee ANYONE a ride anywhere.

She wants to be just recognized as a racer, not a female racer.
Yet would any other male driver with her record be getting this kind of attention?
If she really wants to just be a racer then treat her like any other racer. Let her do more and then we can write stories and be excited.
And don’t think that what I have written I am anti women drivers. Far from it. But can we just have true equality. Where performance get a person noticed, not there gender or race.

A new Princess Sparkle Pony!
I wish her the best. Remember, winning is everything.