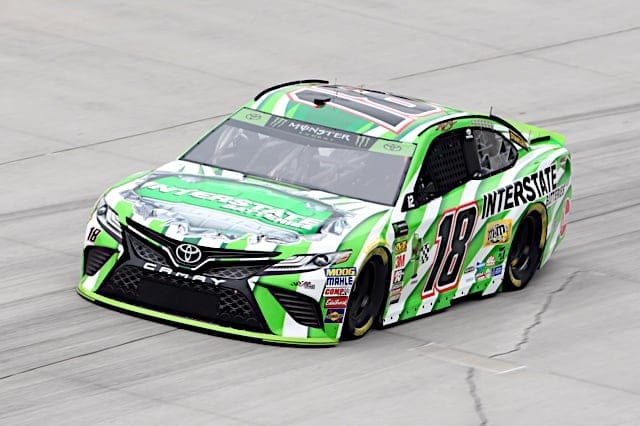 The Big 3 haven't been more than the Average 3 so far in the playoffs (Photo: Nigel Kinrade Photography)

1. The so-called Big Three of the Monster Energy NASCAR Cup Series have only won one of the past nine races after claiming 17 of the first 23. Are they still the championship favorites, or has someone else moved to the front of the pack?

Zach Gillispie: The Big Three have surprisingly stalled out in the playoffs. While Kevin Harvick, Kyle Busch and Martin Truex Jr. are still competitive, we have seen other drivers rise to the occasion (ahem, Chase Elliott and Aric Almirola). What concerns me about Harvick, Busch and Truex is their uncharacteristic performance over the last several races. Last weekend at Kansas Speedway, for example, Truex was never a factor; he struggled with an ill-handling racecar the entire event. Harvick was nagged by yet another penalty, which ultimately lost him the race. Several people have also questioned the disappearance of speed in the Toyota camp, which is concerning for Busch. However, the points that the Big Three have built up should carry them through round three into Homestead-Miami Speedway, but there is that fourth driver that will be there with them. Because of such falloff and absence of consistency., I am tempted to say that the fourth driver at Homestead, which I believe will likely be either Elliott or Almirola, may actually be the favorite for the title.

Mike Neff: Harvick and Busch should advance with either wins or points, barring something crazy. Truex is no longer a favorite. It was surprising he made it out of this round. He may make the finals, but it will be a surprise more than a foregone conclusion.

Wesley Coburn: Truex ceased to be a real playoff threat when it was announced that Furniture Row Racing was shutting down. The more the season ticks toward its end, the less a contender he will be. Harvick and Busch will still be around at Homestead, and the fourth will either be Elliott or Kurt Busch.

Amy Henderson: It’s all about momentum right now. Who’s got that? Elliott. However, someone else could just as easily get hot in the next three races. Kyle Busch and Harvick will be in it at Homestead. Truex can and should be, but his team is in full lame duck mode right now. If he doesn’t make the cut, my money’s on Kurt Busch. But unless one of those four wins a race or two in the next three weeks, nobody’s really a clear favorite. If you like this playoff format, it’s a great way to end the season with some uncertainty heading into the final stretch. If you don’t, then talking about anyone but Harvick or Busch winning the title is probably making you grit your teeth.

Christian Koelle: One thing I counter with this is that Brad Keselowski won three straight races to end the regular season and kick off the playoffs and now he’s eliminated. It’s going to be all about who can score the best attack during the playoffs without losing too much.

2. The Chip Ganassi Racing No. 42 XFINITY team has been to Victory Lane twice in the past month with both Ross Chastain and John Hunter Nemechek. If you were choosing one of them to run full-time, who would you go with and why?

Henderson: Ross Chastain, because he’s shown more consistency. Every race he ran in the No. 42 produced top finishes. While over a full season the law of averages would be bound to catch up, experience and consistency win championships. John Hunter Nemechek is talented and deserves a full-time ride for sure, but if I’m looking for a full-year title run, Chastain has the edge right now.

Coburn: Nemechek. He appeals to old-school fans by racing for his dad’s team in the Camping World Truck Series and also by racing severely underfunded vehicles and putting them into Victory Lane repeatedly. He’s younger than Chastain and doesn’t irritate other racers with his style. If a Ganassi car isn’t having a great day, he can work with it, given his experience with NEMCO Motorsports trucks, and the more time he gets in top-tier equipment, the better driver he’ll become.

Koelle: No matter who lands in the No. 42, we can kind of predict they will have to share the car with Kyle Larson and whoever takes over the No. 1 car if they have the interest to run XFINITY. Nemechek at GMS Racing would be a great move for the organization, and since Chastain will probably be running a full season with Premium Motorsports on the Cup side, CGR would be best for him.

Gillispie: What I like about both drivers is that they are old-school racers; they worked their way up without much sponsorship backing. We have seen Nemechek take unsponsored trucks to Victory Lane in the truck series, and Chastain has consistently outperformed several top XFINITY Series teams who have had 10 times the budget that his JD Motorsports team has. Both deserve a full-time competitive ride in the series, but ultimately, I would pick Chastain, as he has the experience in the series that Nemechek lacks. In the three races that Chastain ran for Ganassi this season, he ran in the top two the majority of the events. Nemechek has shone in the same car but has also lacked consistency. Chastain’s grit and determination as a driver and his never-give-up attitude are selling points.

Neff: If money wasn’t an object, I would put Nemechek in the car simply because he is younger. But due to the fact that the folks at DC Solar have taken a liking to Chastain, he will most likely get the nod for a full season in the No. 42.

3. NASCAR’s Drive for Diversity combine was held this week. Do you think such tryouts are a good way for drivers to get opportunities to drive in various levels of NASCAR?

Henderson: It’s hard to say it’s not good if it leads to young people to be able to break into the sport who might not otherwise have the backing, but the diversity program has always kind of rubbed me the wrong way. The good drivers who came through, like Kyle Larson, were good enough to get rides anyway, and I’ve always wondered if this program means other deserving talents not part of it get overlooked. At the end of the day, it’s a step in the door for some young talent, so it’s never a bad thing, just kind of an inefficient way of finding that talent.

Gillispie: A tryout type system is great for the sport. This gives every qualified driver a platform to show their talent. I have consistently voiced my opinion that sponsorship-driven rides are terrible for competition, not to mention for the overall health of the sport. What I love about the style of tryouts for the Drive for Diversity combine is that it does not require sponsorship to land a ride. This way, a driver can prove that they have the skill (not the money) to work their way up the ranks in professional auto racing, just like the old days.

Koelle: It’s a good way for these drivers to get their names on the board, but the best way they can do that race in lower series like the ARCA Racing Series and K&N Pro Series. The saddest thing about this whole thing called racing is you have to have money to make it. Talent can’t get you too far anymore, and that’s a shame.

Coburn: I guess so. The lower series are basically invisible, so in that sense, it isn’t helpful, but at the same time, the Drive for Diversity has produced drivers like Larson, so that’s something. A tryout system is probably the fairest way to evaluate talent, but it would be better for the sport if it were held at a Truck Series level, to at least get a tiny bit of exposure.

Neff: It is a great way to try and evaluate talent on a level playing field. It would be nice to see achievement and ability give everyone an equal shot, but we all know that is not the case. When you have a predetermined number of slots, doing a combine is your best way to fill them.

4. Kimi Raikkonen just ended a long Formula 1 winless streak by winning the U.S. Grand Prix in Austin last week. Right now, we’ve got a lot of drivers in NASCAR with droughts of their own, including Denny Hamlin, Jimmie Johnson and Kyle Larson. Which driver has the best chance to end their drought by season’s end?

Koelle: I have had Paul Menard circled for a very long time. He’s in good equipment that can win, and in his sophomore season at Wood Brothers Racing next year, something tells me the No. 21 will compete for victories again soon before any of those three go back to Victory Lane. Larson could win at Homestead, but it’s an unknown.

Coburn: Jimmie Johnson‘s definitely not winning this season, maybe ever again in his MENCS career. Denny Hamlin has the better car, though Larson is the superior driver skill-wise. Of those two, Larson’s driving skill overcomes his car, so the No. 42 will win before the No. 11.

Henderson: You know, I don’t know. Hamlin has the best cars; there’s really no reason he shouldn’t be winning races, but he gets in his own head and things snowball. Johnson is the opposite — he’s such fierce competition that if he had enough speed to seal the deal, he’d be there, but he’s bringing a shetland pony to a thoroughbred race most weeks. If he can’t win at Martinsville Speedway or maybe ISM Raceway, he’s not doing it at a mile-and-a-half. Larson should be contending weekly, but he’s in a slump that keeps getting worse. Jamie McMurray isn’t living up to his equipment. So how about this: Alex Bowman has had some decent runs this year, and the playoff pressure is now off. I say he breaks through before these veterans.

Neff:  We are going to Martinsville, right? Johnson has the best shot of the group to break through because he knows how to get around Martinsville and aero is not nearly the factor it is there as it is anywhere else.

Gillispie: Larson at Homestead. That’s a race that he has had circled on his calendar all year.

I’d agree but he has to be in the Farcical Four or else he won’t be allowed to pass them, like last year.

Found on Brian France impounded Lexus was a copy of the 2018 script. Elliot wins title

Yes, that does seem to be the script! Clyde takes it! God, how stinking fake……..