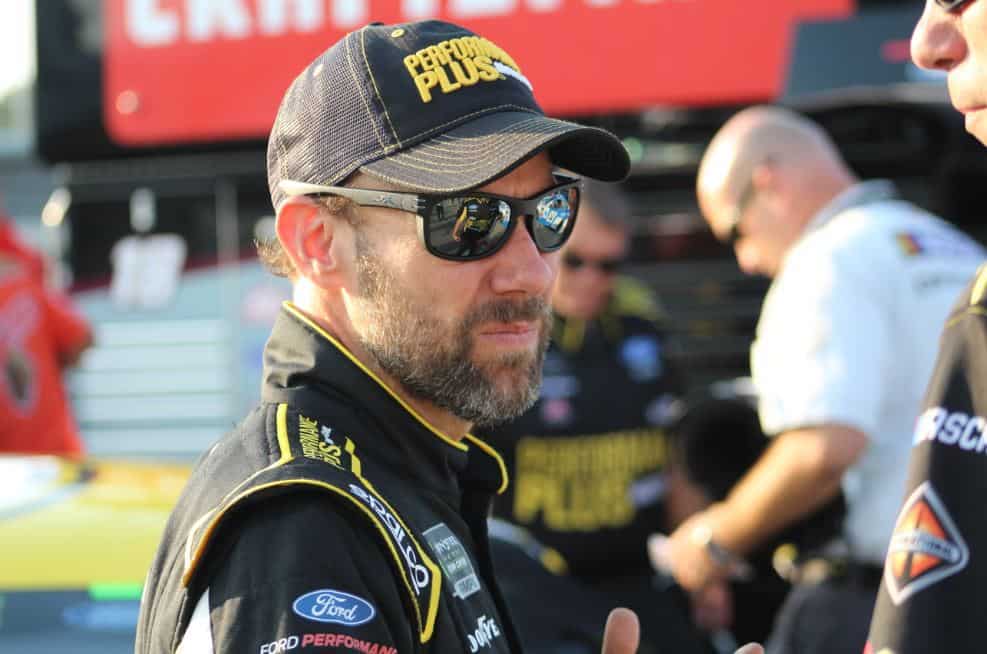 Though he’s known these days more for his role on TV broadcasts, Hermie Sadler continues a Monster Energy NASCAR Cup Series career that dates back over two decades this weekend when he steps into Premium Motorsports’ No. 7 car at Martinsville Speedway.

Sadler, brother of multi-time NASCAR winner and XFINITY Series regular Elliott Sadler (well, regular until the end of this year), began his NASCAR career when he made his XFINITY debut in 1992, but he reached the Cup level for the first time in 1996, driving a race at Dover International Speedway and finishing 37th. Despite a shift to covering NASCAR on television in recent years, as he currently holds a spot on FOX’s broadcast team, Sadler still pops in occasionally on the track, and last year, he competed in his first Cup event in five years when he drove this same Martinsville race.

Of those entered this weekend at Martinsville, Sadler’s career predates every single one of them; in fact, he made his first Cup start when some drivers had yet to be born. Only Matt Kenseth, who made his series debut in 1998, comes close to Sadler’s streak in the series.

But does he have the longest active run on the Cup level right now? Surprisingly (or perhaps unsurprisingly, depending on your opinion of the sport’s modern-day drivers), Sadler’s 22-year Cup career is not the longest current streak.

Stanton Barrett, who returned to Cup racing for the first time in a decade late last month when he drove Rick Ware Racing’s No. 51 at the Charlotte Motor Speedway ROVAL, has quite the lengthy Cup career despite having just 23 starts to his name in a span of nearly 20 years. He first appeared in the series driving the No. 90 for Donlavey Racing in 1999, a team for which he competed in two races and failed to qualify for seven more. His XFINITY Series career is even lengthier, running from 1992 to 2016.

Matt Kenseth reached the two-decade mark of his Cup career this year when he stepped in for Trevor Bayne in Roush Fenway Racing’s No. 6, with Sunday’s Martinsville start set to be his 13th of 2018. A longtime presence in the series, and its 2003 champion, Kenseth first ran a Cup race in 1998 when he filled in for Bill Elliott at Dover, finishing sixth, though he also attempted a one-off for RFR earlier that season, failing to qualify the No. 60 at Talladega Superspeedway.

After four years in the XFINITY Series, a period during which he won what remains to this day his only two national series wins in 1993 and 1994, Sadler jumped to Cup at Dover in a William Slate-owned, Peebles-sponsored No. 26. In the mid-2000s, he was averaging double digits in starts each year, generally for his family-owned team. His streak may not have put him on this list had he not returned to the series last year, also in the No. 7, at Martinsville. Like Barrett, he also has an XFINITY career that runs from 1992 to 2016.

Though he reportedly ran his final Cup race with the Daytona 500 earlier this year, Mark Thompson still counts after having run at least one race in 2018, and his career might be the most interesting of the bunch. After all, he first competed on the Cup level in 1992 when he ran eight laps for Henley Gray at Pocono Raceway, with backing from his company, Phoenix Air. Though he competed for many years in the ARCA Racing Series and then in XFINITY, he wasn’t spotted again in Cup until last year, when he snapped one of the longest droughts between Cup starts in the series’ history by driving at Talladega.

No list of old-timers would be complete without 1990 Daytona 500 champion Derrike Cope. Unlike some of the other drivers on this list, Cope has pretty much been a presence in NASCAR on at least some level since his 1982 Cup debut, when, aged 23, he finished 36th at Riverside Speedway. In 2018, a year after he returned to the Cup Series and competed in 15 races, he’s run three for the 1-year-old StarCom Racing, for which he is the team manager, driving the organization’s second car, the No. 99. Chances are if we do this list in 10 years, Cope will still lead it; it’s tough to imagine a NASCAR without him.

Working on his car.

I think he is at the DMV taking his driver’s test.

I think he’s more qualified than some of the lunatics driving on our roads.