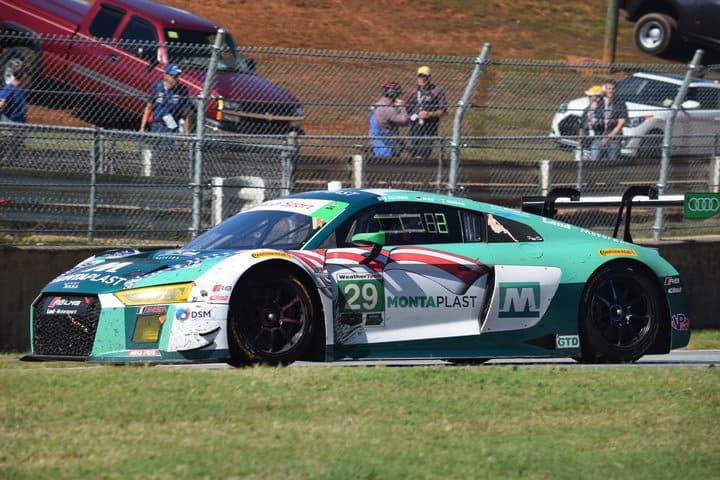 Audi Sport Team Land’s Christopher Haase claimed the overall pole for Sunday’s California 8 Hours Saturday afternoon (Oct. 27) in his Audi R8 LMS GT3.  Haase, driving a similar car to the one above, but with a paint scheme resembling the stripes on the American flag, turned in a lap at 96.304 mph in the closing minutes of the session.

Haase’s time was seven-hundredths of a second faster than Strakka Racing’s Raffaele Marciello in the fastest of the Mercedes.  Dries Vanthoor, driving the No. 19 Audi for Audi Sport Team WRT, was third quickest.  SunEnergy1 Racing’s Luca Stolz was fourth overall and claimed the Pro-Am pole position in his Mercedes.  Black Swan Racing’s Patrick Long was fifth in the best of the Porsches.

As previously noted, Stolz in fourth overall was the best of the Pro-Am teams.  His time was only eight-hundredths of a second faster than Strakka Racing’s Felipe Fraga in the No. 42 Mercedes.  Precision Products Motorsports’ Shinya Michimi was third in class and 15th overall.

Qualifying was a bit unusual by American standards.  There were three rounds of qualifying Saturday morning.  Each driver had to participate in at least one of the rounds (teams with two drivers could have one driver do two rounds).  The fastest laps for each driver were averaged together to determine not only who advanced to the Pole Shootout, but the rest of the grid as well.

PF Racing’s No. 10 Ford Mustang GT4 will start fourth in class.  That car is being shared by Jade Buford, Scott Maxwell and James Pesek, all regulars in Pirelli World Challenge and very familiar with the Mustang.  GMG Racing’s No. 2 Audi was fifth with Pirelli World Challenge GTS champion James Sofronas sharing with Jason Bell and Andrew Davis.  TRG’s Spencer Pumpelly turned in the fastest GT4 lap in qualifying, but his Porsche Cayman GT4 Clubsport MR will start sixth in class.

Note: The teams that participated in Super Pole are locked into the Top 15 starting positions.  In the Combined Qualifying Results link, everyone from position No. 16 to the rear of the field will start in that order.

The California 8 Hours is scheduled to go green at 12:15 p.m. EDT Sunday.  Coverage of the race starts at Noon on CBS Sports Network.  At 2 p.m., the race will move to Motor Trend OnDemand before returning to CBS Sports Network for the finish at 7 p.m.