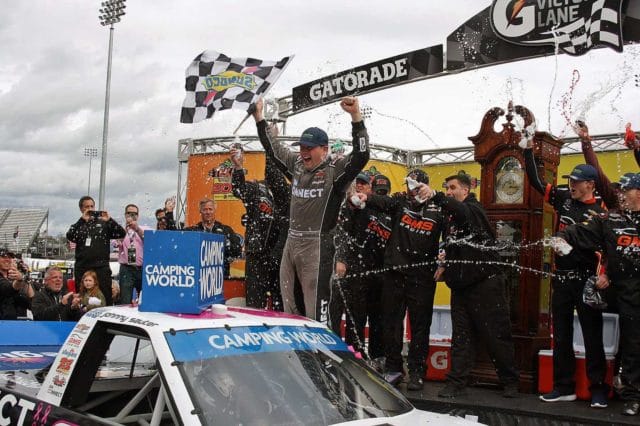 Apparently, three grandfather clocks were not enough for Johnny Sauter.

The 2016 Camping World Truck Series champion won the Texas Roadhouse 200 at Martinsville Speedway on Friday afternoon (Oct. 27) for his fourth win at the paperclip. Sauter breaks a tie with Dennis Setzer, Mike Skinner and Kevin Harvick for the most wins at the track in Truck Series history.

“My wife tells me all the time that we have four kids so we need four clocks so you can will each one of them a clock when you finally tip over,” Sauter said.

The win also clinches Sauter a spot in the Championship 4 at Homestead-Miami Speedway.

“We’re going to Homestead, racing for a championship. That’s what it’s all about.” Sauter said. “I’m so proud of these guys. Pit stops were awesome. Track position just seems to be the name of the game here anymore, and I just got to thank everybody. This is a big win.”

Sauter dominated the race, leading 148 of the 200 laps. But he still needed to work some restart magic. Sauter took the lead from Myatt Snider on the final restart with 34 laps to go using the outside line.

He lost the lead to Snider on the prior restart with 41 laps to go when Snider jumped to the inside of the No. 21, rooted the 2016 champion out and took the lead just before the caution came out for Grant Enfinger‘s spin.

“I felt like I had a good restart, but I’m not sure he would’ve made the corner if he didn’t dive-bomb in there,” Sauter said. “I had really good grip on the outside so I felt compelled to take the outside groove, and that just opens you up to a bonsai shot.”

Snider’s team warned him not to race Sauter so aggressively and lost the lead to him without much of a fight on the next restart.

“I roughed him up, and he can get angry,” Snider said. “You can’t regret those kind of actions because you have to take all those chances you get. I wouldn’t do anything different, but I don’t like roughing people up.”

Snider finished the race in third after Brett Moffitt got around him for second with a few laps to go.

Matt Crafton and Enfinger gave up the most points of the playoff drivers in the Round of 6, finishing in 13th and 14th.

Todd Gilliland won the pole for the race and led the opening 39 laps, but gave it up when he pitted during the first caution. Sauter took over the lead and rarely gave it up the rest of the race. Gilliland ended up finishing in 12th.

Benjamin briefly took the lead from Sauter when he stayed out and everyone else pitted after stage two. The two touched a few times on the restart with 89 to go before Sauter used his fresher tires to power by Benjamin.

Up next for the Truck Series is Texas Motor Speedway next weekend. There are only two races left to decide the Championship 4.

I’m glad Johnny won this week again. When he doesn’t win it is hard on his body. He looks like he will explode from defeat.