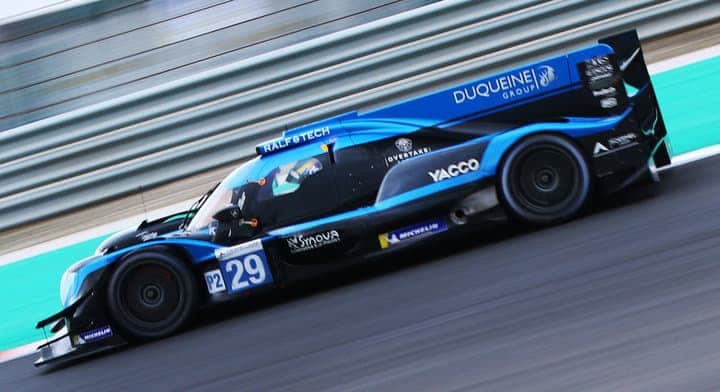 In Portugal Saturday afternoon (Oct. 27), Duqueine Engineering’s Nicolas Jamin turned in a lap in the closing moments of qualifying at 111.673 mph in his ORECA 07-Gibson.  That time held up to give both Jamin and Duqueine Engineering their first-ever overall pole in the European Le Mans Series for Sunday’s 4 Hours of Portimão.

In LMP3, M. Racing – YMR’s Lucas Légeret set a good lap at 103.337 mph roughly halfway through the session in his Norma M30.  Shortly afterwards, Eurointernational’s Giorgio Mondini spun and got stuck in the gravel trap in Turn 5, which brought out the red flag.

The session resumed with three minutes and 21 seconds left.  Teams attempted to chase down Légeret’s time, but were unable to prevent the young Swiss racer from taking the LMP3 pole.

Légeret’s lap was six-hundredths of a second faster than the similar Norma M30 driven by Ultimate’s Matthieu Lahaye.  The session was not trouble-free for Lahaye as he spun his white and red Norma exiting Turn 5 immediately after setting his best time.  The No. 17 Norma was undamaged in the incident.

Finally, JMW Motorsport’s Miguel Molina found the proper pace in his Ferrari 488 GTE to set a lap at 101.276 mph right at the end of the session to claim the GTE pole.  Molina’s lap was three-tenths of a second faster than Proton Competition’s Dennis Olsen.  Teammate Matteo Cairoli turned a lap as fast as Molina early in the session, but it was deleted due to a violation of track limits.  Cairoli’s second best lap was good enough for third in class.

The 4 Hours of Portimão is scheduled to go green at 8:30 a.m. EDT Sunday morning.  Normally, Portugal is five hours ahead of the Eastern Time Zone in the United States, but Daylight Savings Time ends tonight in Western Europe.  As a result, there is a week in which places in the Western European Time Zone that observe Daylight Savings Time (all of it except Iceland) will only be four hours ahead.  The race will be streamed live on EuropeanLeMansSeries.com, the ELMS YouTube channel, and for subscribers of Motor Trend OnDemand.