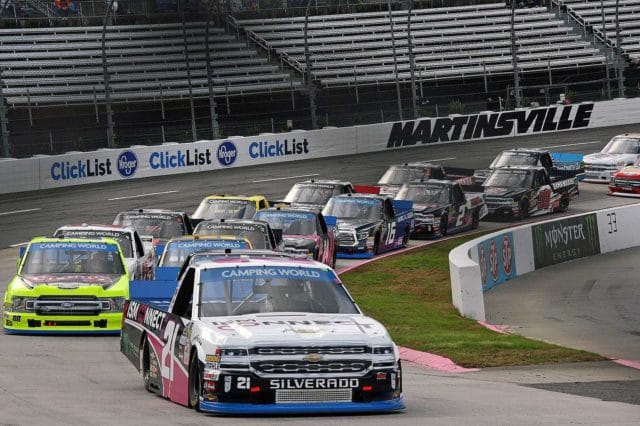 In a Nutshell: It was a bit strange when Johnny Sauter turned the eighth-quickest lap in qualifying for Saturday’s (Oct. 27) Texas Roadhouse 200 at Martinsville Superspeedway. He made short work of getting to the front and went on to dominate much of the race before scoring the win.

Following a lap 37 caution and polesitter Todd Gilliland bringing his truck to pit road, Sauter took over the lead, where he would go on to win stage one. At the end of the stage, Joe Shear Jr. left the No. 21 truck on track, setting Sauter up for a solid second stage. He earned an additional playoff point by winning the stage.

Despite pitting at the end of the second stage, Sauter quickly passed Kyle Benjamin for the lead, where the No. 21 would pace the field until a caution with under 50 laps to go. On the restart, Myatt Snider made a bold three-wide move under Sauter to capture the lead, roughing up the former champion along the way.

Unfortunatelyfor Snider, the move caused a chain-reaction spin behind the leaders, bringing the caution back out. On the next restart, Sauter took the lead back and went on to win the race.

“We’re going to Homestead, racing for a championship,” Sauter said. “That’s what it’s all about.” Sauter said. “I’m so proud of these guys. Pit stops were awesome. Track position just seems to be the name of the game here anymore, and I just got to thank everybody. This is a big win.”

Brett Moffitt finished runner up, while Snider, Ben Rhodes and Benjamin rounded out the top five.

The win is Sauter’s fourth career victory at the paperclip. It also gives him a pass to the championship race at Homestead-Miami Speedway on Nov. 16.

Who Should Have Won: Sauter had the clear-cut dominant truck on Saturday, winning his sixth race of the season. Gilliland won his first career pole for the race and led the opening 39 laps of the race — the only other driver to lead more than 10 laps.

Growing up, Snider ran many local short tracks. He put those skills to use at Martinsville.

Snider qualified the No. 13 in 16th. But once the race began, he gradually made his way through the field, despite finishing 21st at the end of the opening stage because of a late-stage pit stop.

During the second stage, Snider gained a chunk of track position by racing the No. 13 up to 13th. But following the conclusion of stage two, Rich Lushes called for two tires, giving Snider the track position he needed to work with to have a shot at the victory, restarting third.

“We didn’t have the position we wanted all day, but we took two tires toward the end. That was the move we needed because we stayed in the front until the end,” Snider said after the race. “We got out front and got a good finish.”

The second-place finish is Snider’s second consecutive top-five effort. Two weeks ago at Talladega Superspeedway, the No. 13 crossed the finish-line in second position behind Timothy Peters.

Prior to Talladega, Snider had just one top five this season (fourth at Gateway). Dating back to Las Vegas Motor Speedway in mid-September, the No. 13 has three straight finishes of sixth-place finishes or better.

“It’s huge,” Snider said of having momentum moving forward. “We had to step back at the last Martinsville race to kind of think about what we really needed. We brought a really good truck. We could still improve on it  a little bit, but that was definitely a big improvement.”

Snider’s day almost came toan end on a restart with 41 laps to go while restarting third, making a bold move underneath Sauter and Benjamin. The No. 13 scuffed up the entire left side of the No. 21 truck, and was extra cautious on the following restart after poking the bear.

Rubbing is racing! @MyattSnider with an aggressive move to take the lead away from @JohnnySauter. pic.twitter.com/kPpPRwc4H3

Snider believes that Sauter is upset with him, but a win is a win.

“I’m sure because I roughed him up and he can get angry,” he said. “You can’t regret those kind of actions because you have to take all those chances you got. I wouldn’t do anything different, but I don’t like roughing people up.”

With four races remaining in the season, Snider has a combined five starts at the respective tracks with a best finish of 12th at Texas Motor Speedway in 2017.

Martinsville started out promising for Enfinger by qualifying sixth. However, the No. 98 ThorSport Racing team had an eventful afternoon.

Throughout the first half of the race, Enfinger gained no track position, finishing sixth in the first two stages, earning 10 stage points. But in the final quarter of the race, the No. 98 team experienced some issues to result in a 14th-place finish, worst of the six playoff drivers.

On a restart with 41 laps to go, Enfinger got turned in the middle of the field while running inside the top 10. The No. 98 team had to pit four fresh rubber, though he only came back to the aforementioned 14th.

Enfinger also alluded to an alternator issue the No. 98 had. Getting out of Martinsville above the cut-line was a win within itself.

“I think we had decent speed and that’s what made our speed OK at the beginning,” Enfinger said. “We had too many issues. You can’t have those issues. We had an alternator go out. I’m really proud of the effort to have no practice on this truck and it had really good speed. Everybody did a great job tuning this thing in, just had some part failures.”

Since the postseason began at Canadian Tire Motorsport Park, Enfinger has a victory and three finishes of 14th or worse. Meanwhile, he’s combined to lead 71 laps between the four races, despite having an average finish of 12.25.

Moving forward, Enfinger is happy to have gotten out of Martinsville unscathed for the most part, as he believes it’s the wild card race in the Round of 6.

“People can end your day for you and you also have attrition with brakes and engines,” he said of Martinsville. “We battled all that, but I’m proud we had good speed and have a whole truck to work on it and take it to Phoenix. Proud of the effort, just a frustrating day.”

2018 Rookie of the Year Candidates:

No. of rookies to finish in the top 10: One. Myatt Snider finished third.

Rookie of the Race: Snider led seven laps before crossing the finish-line rounding out the podium.

Points Update: With the victory, Sauter is locked into the Championship 4 race at Homestead. Meanwhile, Noah Gragson is still second on the board, 24 points above the cutoff. Moffitt is ranked third, 15 points up. Currently, Grant Enfinger sits on the cut-line, two points ahead of Justin Haley and +10 on Matt Crafton.

Unlike a lot of the CWTS schedule, the series will have back-to-back races, as it heads to Texas Motor Speedway next weekend. In fact, the series ends the season with four consecutive weeks on the road.