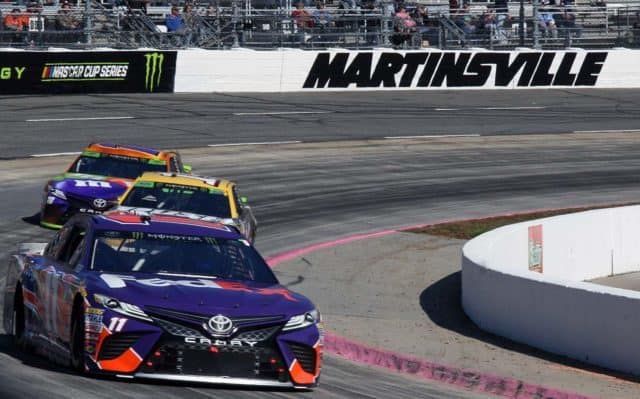 One year ago, Denny Hamlin made a move that has haunted him since.

At the fall Martinsville Speedway race in 2017, Hamlin spun Chase Elliott — an incident that has replayed hundreds of times and turned a great deal of the popular driver’s fanbase against him. Now, the Virginia native gets booed in driver introductions — even at his home tracks.

But more importantly, Hamlin has not won since the incident, something he’s done every year of his Monster Energy NASCAR Cup Series career so far. He made the playoffs this year, but was eliminated after a disappointing first round.

It finally looks like Hamlin’s fortune is turning in the right direction. On Sunday afternoon (Oct. 28), Hamlin finally showed the speed he used to display on a weekly basis at Martinsville.

Hamlin finished second at The Paperclip, almost squeaking by for the win after Joey Logano and Martin Truex Jr tangled coming to the checkered flag.

“[No.] 22 saw [Truex] was in a vulnerable position. They were side-by-side for two laps. [No.] 22 was on the outside, and that’s a position where you can’t do anything with the leader,” Hamlin said. “It looked like to me, [Logano] conceded the spot… Once I saw he conceded the spot, followed in behind [Truex], I knew we were in for exciting Turns 3 and 4.”

Logano bumped Truex out the way and the two collided as they came to the start/finish line. Hamlin, with a full head of steam, went underneath the pair. He cleared Truex for second, but couldn’t get past Logano before the finish.

In the closing laps, Hamlin passed Brad Keselowski and Kyle Busch for third and fourth, but he was just too far back to take advantage of the battle between the leaders.

“Just took too long to get around the [No.] 18 and [No.] 2. Once we cleared them, we were coming,” Hamlin said. “I wasn’t close enough to capitalize when those two got into each other.

The five-time grandfather clock winner ran in the top five for almost the entire race. Hamlin qualified in third and took the lead from his Busch, his teammate, on lap 31, eventually winning Stage 1 — only his third stage win of the season.

Logano got around Hamlin in the second stage, but the No. 11 hung on for second in the stage, tying Logano for the most stage points on the day. Hamlin lost track position with restarts on the outside lane and not having the best car on short runs, but his car was one of the best on the long runs.

“We weren’t going to steal anything. We had a great car on the long run, a car that ran the top three to four all day long,” Hamlin said. “It was just a good effort… It’s good to have runs like this.”

Hamlin moved up one spot in the standings to 11th as a result of the race. He trails 10th place Keselowski by 14 points. Hamlin has finished in the top 10 in points for four consecutive seasons and in all but two years of his career.