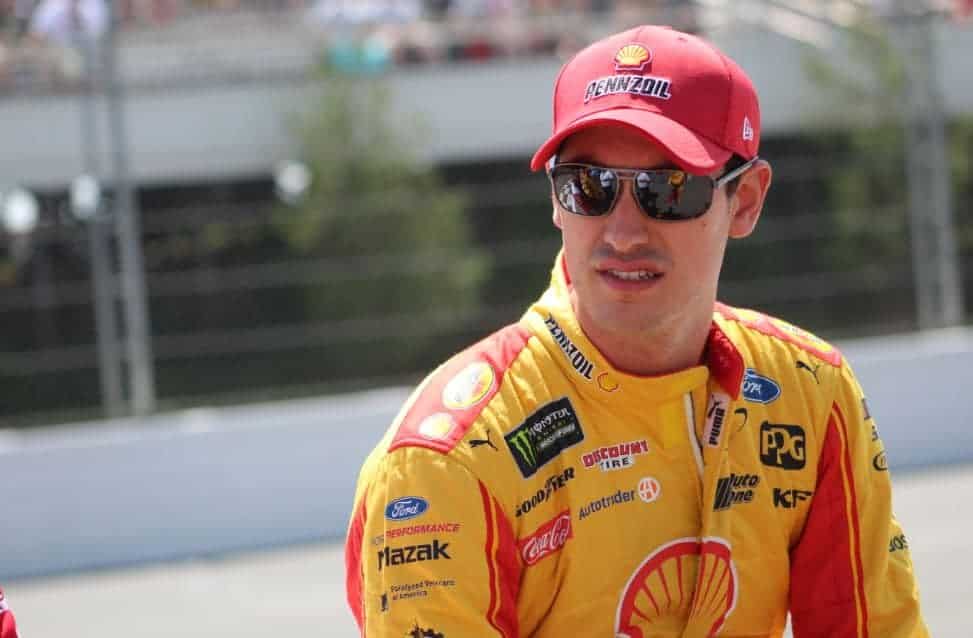 Joey Logano has spent the year playing second fiddle to NASCAR’s Big Three. But the final laps of Sunday’s (Oct. 28) First Data 500 at Martinsville Speedway gave him a chance to go toe-to-toe with them in the 2018 season finale.

Logano survived an epic 10-lap battle with Martin Truex Jr. to earn his first career Martinsville victory. The No. 22 Team Penske Ford dominated for long stretches of the 500-lap race but saw his handling deteriorate in the closing laps.

That gave Truex an opportunity and he pounced, finally clearing Logano on the white flag lap after 10 laps of running side by side. But Logano fought back, laying the bumper to Truex’s No. 78 to scoot ahead and take the checkered flag. The contact between them caused Denny Hamlin to sneak by for second as fans booed Logano’s last-lap maneuver.

“I was just thinking about Miami,” Logano said of the final-lap melee. “We’re here to win the championship this year. That’s NASCAR racing. That’s the grassroots, what fans come here to see.”

Hamlin had a front row seat of the whole incident.

“[No.] 22 saw he was in a vulnerable position. They were side-by-side for two laps. [No.] 22 was on the outside, and that’s a position where you can’t do anything to the leader,” Hamlin said. “It looked like to me, he conceded the spot… Once I saw he conceded the spot, followed in behind him, I knew we were in for exciting Turns 3 and 4.

Truex gave the thumbs down during Logano’s interview, offering up frustration after what he felt was a clean race to the white-flag lap.

“He won the battle,” Truex said of Logano. “But he ain’t gonna win the damn war. We should be in Victory Lane right now. I was next to him for six laps, I never knocked him out of the way. I cleared him fair and square… he just knocked me out of the way. That’s short track racing, but what goes around comes around.”

“I’m not surprised, considering how he drives,” added Truex’s crew chief Cole Pearn. “But it’s his choice to make.”

Roger Penske, owner of Logano’s team, came to his driver’s defense and said Truex should know better than to say things like that.

It’s not the first time Logano has been mired in Martinsville controversy. Back in 2015, he was leading when Matt Kenseth took him out in revenge for contact at Kansas Speedway a few weeks earlier. This time, Logano was the one coming out on top while Truex was left to wonder what might have been.

Logano did dominate large sections of the race, winning the second stage and leading 309 laps. He’ll now hold a guaranteed spot at the Homestead-Miami Championship 4 finale while Truex, Kevin Harvick and Kyle Busch currently hold the other three spots.

Kyle Busch wound up fourth in the race, opening up a 46-point lead over the cutline for Homestead. Brad Keselowski rounded out the top five followed by playoff drivers Kurt Busch and Chase Elliott. Ryan Newman, Daniel Suarez and Harvick completed the top-10 spots.

The race itself was relatively clean with 20 drivers finishing on the lead lap and only four drivers failing to finish. Five drivers combined to lead 499 laps with Logano joined at the front by pole sitter Kyle Busch, Hamlin, Truex and Keselowski. The final two made a spirited charge after starting the race from the rear of the field.

After the race’s final caution, Keselowski charged to second after acting like an offensive lineman, blocking all comers for Logano on the restart. But Keselowski’s car was quick enough to challenge his Team Penske teammate for the lead for several laps. It was Truex that ruined their 1-2 party up front as the long green-flag run kickstarted his Toyota into gear.

He just didn’t have enough to hold off the hard push on his rear bumper at the finish.

Race fans come to Martinsville to see the beating and banging and the bump n run. So when it is executed the fans boo. You can’t have it both ways, hypocrites.
How many times is Truex going to say no more mister nice guy.
Also how many trolls are going to say another dull, boring NASCAR single file race.
Another NASCAR unnecessary quick yellow from a car that virtually didn’t stop after a spin. He was also way out of the way, being on the very inside of the front stretch coming off turn four.