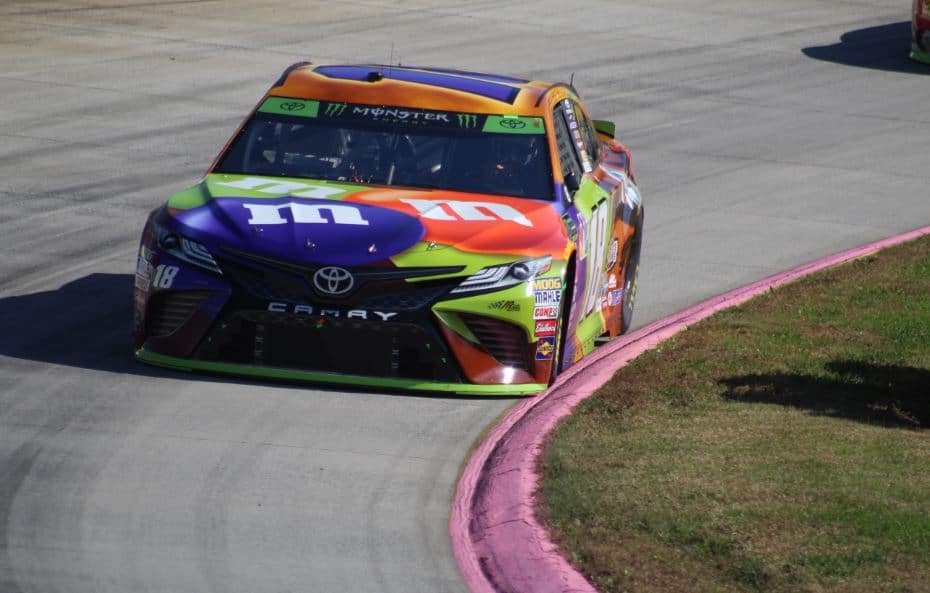 Whenever Kyle Busch starts from the pole in a Monster Energy NASCAR Cup Series race, it might be a tough day for the competition. However, in Sunday’s (Oct. 28) First Data 500 at Martinsville Speedway, that wasn’t the case.

Busch dominated the opening 100 laps of the race, though having close battles with Joey Logano and Joe Gibbs Racing teammate Denny Hamlin. The No. 18 finished the opening stage in third, collecting eight stage points.

During a caution-free second stage, Busch remained around the top five, back up his third-place stage one finish with another third. But it wasn’t as pretty as it sounds.

“We made adjustments to our racecar all day long and I’m not sure one of them was right,” Busch said after the race. “We tried going one way and then coming back the other and it was like nothing was ever helping us. We were kind of stuck with what we had most of the day.”

It was actually an adjustment after the second stage where the race changed for Busch and the No. 18 team.

“We made a big change at the beginning of the third stage and that absolutely made us horrible,” Busch added. “Somehow we were able to rebound. We finished better than we should have, but we certainly wanted to get more out of here and wished we could have won.”

A  rash of cautions during the final stage allowed for Adam Stevens to take multiple shots at getting the No. 18 car tuned in. Though the pit crew was able to get Busch out second for what turned out to be the final pit stop of the day, Busch dropped a pair of positions, taking the checkered flag in fourth.

“We much rather would have won,” he said. “I thought we had a winning car early and just some of the adjustments we made weren’t going the right way. We went one way, wasn’t the right way. We went back to where we were and that wasn’t the way. I just don’t know what we could have done to make it better. Overall, we tried, fought hard and did the best we could and came home fourth.”

Busch enters Texas Motor Speedway as the most recent winner in the Lone Star State. After earning 16 stage points and finishing just off the podium, the No. 18 team sits second on the playoff grid (Joey Logano is first by winning), 46 points above the cut-line, which is currently held by his brother Kurt Busch.

Despite being in a good position of advancing to Homestead, Busch isn’t guaranteed to be racing for a championship in three weeks.

Busch added: “We had a good solid day, but anything can happen”