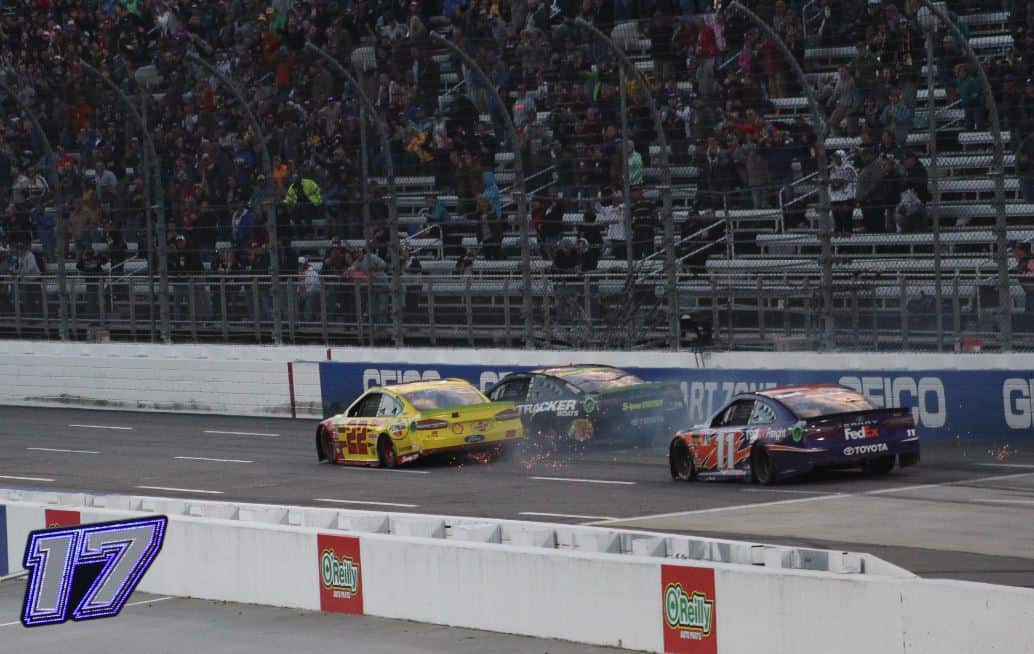 Martin Truex Jr. had to come from the rear in Sunday’s (Oct. 28) First Data 500 at Martinsville Speedway, and had a real shot of winning coming out of Turn 4 of the final lap.

Truex, along with a few other drivers failed post-qualifying inspection, which set the No. 78 car to the rear for the initial green flag. Through the first stage, he methodically made his way through the field, finishing seventh in stage one. In the second stage, the No. 78 jumped up the leaderboard to fourth, earning an additional seven stage points.

However, it was a 40-lap sprint to the finish where Truex put himself on a position for the win. Restarting fourth, Truex passed Kyle Busch midway through the run, then made quick work of Brad Keselowski in order to chase down race leader Joey Logano. With under 10 laps to go, the No. 78 caught the No. 22 car, where it was a no-holds barred finish, including a handful of laps racing side-by-side.

Truex cleared Logano coming to the white flag, though heading into Turn 3 on the final lap, Logano drove hard into Truex, nearly spinning the No. 78 car, in order to get the victory. Truex finished third.

“Just took a cheap shot at the end there,” Truex said of Logano’s move coming to the checkered flag. “We had an awesome racecar all day long and did what we had to do to put ourselves in a position to win — our first time here at Martinsville, our first short track. I really wanted to win that race and I feel like we definitely deserved it. We raced them all clean, we passed them clean all day long and just outran them in the long run.”

Based on Logano’s history, Truex wasn’t surprised that the No. 22 made little effort of passing the No. 78 clean, instead driving through him.

“There was nothing I could do about it. It sucks, but that’s the way it goes. I can promise you, I won’t forget what he did.

Truex is now 0-78 in his Cup Series career when it comes to winning on short tracks. Meanwhile, he believed this was the best car he’s ever had at Martinsville.

This is a near loss he won’t forget.

“Bumping and banging is fine,” he said. “I never touched him to pass him, so I thought I would get the same courtesy once I passed him.  I thought he’s not just going to dump me or knock me out of the way blatantly, he’s going to try to pass me. He didn’t even try to pass me. It’s cheap but he’s got his spot to got to Homestead.”

With Texas Motor Speedway and ISM Raceway remaining in the Round of 8, Truex is tied with Kevin Harvick for third on the playoff grid, 25 points above the bubble. Earlier this season at those tracks, he finished 37th and fifth, respectively.

In racing, as in life itself, nobody ‘deserves’ anything. You have to fight for it.

True, we deserved the win is like saying the track owes you a win. It’s short track racing Martin, 78 short track races and you haven’t figured it out yet. Go ask Tony.

Marty, since he started winning races after one of the biggest droughts and zero results in NASCAR a few years ago, has morphed into a nasty entitled jerk. His crew chief is a nasty ahole too. Lets see. Twitter is their weapon, nasty stuff. Marty led 18 laps, Logano 309. HMMMMM. With that said. NOBODY deserves anything, that is not how sports are. Man this guy is full of himself. His car looked like the end of the race he went to a demo derby! And that is how it should look! The nature of short track racing. Marty moved many on out of the way, and he whines as if LOGANO stole or did not bow to him? What a hypocrite and a liar. Typical TOYS DRIVER. He is the perfect person to go to the Gibbs Daycare! That was racing, ballet Marty? Sherry can tweet how awesome you are in a tutu! That witch is nasty on twitter too, shut up Sherry. Who is she anyways? A roommate for God’s sakes. Shut up!

The 78 failed post-qualifying inspection. He shouldn’t have been in the event, which says a lot about Brian’s new and improved product.

says more about the teams and the influence team owners and sponsors have.