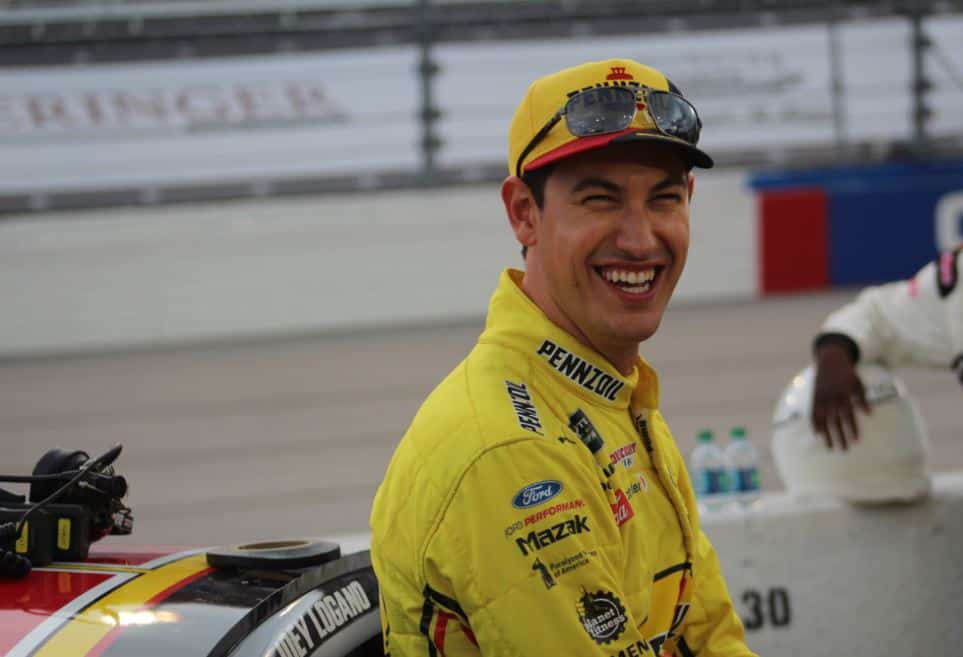 Seven races into the NASCAR playoffs, the sport’s three most successful drivers this season – Kevin Harvick, Kyle Busch and Martin Truex Jr. – have won just once in the postseason. Joey Logano added the latest nail in the coffin Sunday (Oct. 27) with his controversial bump-and-run in the last lap of the First Data 500. In just seconds, Truex fell from the lead to a loser while a driver outside the Big Three punched their ticket to the Homestead-Miami season finale.

Truex had just clawed back to the front after a day spent fighting from behind. It’s a theme the Big Three knows all too well in a postseason littered with what-could-have-been moments.

There was a Las Vegas race Truex forged to the front, leading 96 laps only to lose track position and the race to Brad Keselowski. Two weeks later, the Charlotte ROVAL was in Truex’s hands until Jimmie Johnson made contact, spinning them both in the last turn of the race.

Harvick then blew arguably all three races in the Round of 12 on pit road. A broken valve stem from a flying lugnut caused an extra-green flag pit stop while dominating the Monster Mile. NASCAR Overtime at Talladega caused a conservative call from the pit box, losing the lead for fear he might run out of gas. Then, at Kansas Speedway last weekend, the No. 4 took control late only to get docked for speeding on their final green-flag stop.

This one was another race that should have been firmly in the Big Three’s grasp. Kyle Busch won the pole and led early before the handling went away on his Toyota; he had four top-five finishes in the other five short track races this year. Truex, meanwhile, charged up from the rear after failing post-qualifying inspection. He had the best car on long green-flag runs and his clean, side-by-side thriller with Logano over the final 10 laps showed why he’s the reigning NASCAR champion.

But Truex slid up in front of Logano, expecting the underdog to play nice and that proved a tragic mistake. The Team Penske driver knew this could be his lone opportunity to cash in on Homestead and he took full advantage, knocking Truex right out of the way.

Afterward, Truex predictably pissed said Logano won’t “win the damn war.” But to stop the No. 22, his Furniture Row Racing team has to simply remain in the game. Logic says he, Busch and Harvick (each with at least a 25-point cushion) should still cruise into the Championship 4. But how much longer can they keep stumbling over themselves before they throw their postseason away?

Martinsville’s grandfather clock will be ticking elsewhere this Monday morning. The clock is now ticking on the Big Three’s ability to get their NASCAR seasons back in order… before it’s too late. – Tom Bowles

After a weekend off, Camping World Truck Series drivers rolled into Martinsville Speedway for the first of three races in the Round of 6. And now that the checkered flag has flown over the Texas Roadhouse 200, only two races remain to set the Championship 4.

A dominant race put Johnny Sauter in the catbird seat as he led a race-high 148 of 200 laps en route to his sixth victory of the 2018 season. The win also locks the driver of the No. 21 Chevrolet into the Championship 4 that will race for the title at Homestead-Miami Speedway in a few short weeks.

It shouldn’t come as a surprise that Sauter finds himself in the hunt for the title for the third straight year. In fact, his five victories prior to Martinsville put him in a position to skate his way right on to Homestead. But instead, the veteran driver whose performance has improved markedly over the three seasons he’s spent with GMS Racing made a statement that he wants another trophy.

With races at Texas Motor Speedway and ISM Raceway in Phoenix ahead, it isn’t any clearer who may join Sauter at Homestead. Noah Gragson sits second in points, a healthy 24 markers ahead of the cut line, and Brett Moffitt is in a decent spot as well with a 15-point advantage. Meanwhile, Grant Enfinger sits a slim two points ahead of Justin Haley and 10 markers ahead of veteran teammate Matt Crafton. – Beth Lunkenheimer

Lewis Hamilton cemented his legacy today in Mexico with his fourth-place finish securing his fifth Driver World Championship. The feat ties him for second on the all-time championship list with Juan Manuel Fangio, behind Michael Schumacher. The consistency Hamilton has shown through his 12 years in Formula 1 easily makes him one of the greatest of all time. Driving a Mercedes powered car his entire career, he was bound for greatness in his first season, missing a World Championship by one point in 2007 and coming back to steal it from Felipe Massa in 2008.

Since his much-criticized move to Mercedes AMG Petronas in 2013 and the beginning of the Hybrid era in 2014, Hamilton’s legacy took that next jump. If Hamilton’s car had a few less mechanical issues in 2016 gifting the title to Nico Rosberg, we will be sitting here talking about a five-year era of dominance among the likes of Schumacher and Ferrari to start the 2000s.

While Hamilton receives a lot of criticism for his lifestyle, social media presence and other moments where fans label him pampered and conceited, you cannot deny the greatness and consistency from Lewis Hamilton. Hamilton will be talked about as one of the greats along the likes of Aryton Senna, Alain Prost, Niki Lauda, Schumacher and the man that he’s tied in titles, Fangio. – Drew Mongiello

Sunday’s California 8 Hours at WeatherTech Raceway Laguna Seca seemed like it was going to be more of the same.  Marciello, along with teammates Maximilian Götz and Lewis Williamson led the majority of the race.  In the last couple of hours, Marciello got impatient.  A couple of off-course excursions into the dirt resulted in his Strakka Racing Mercedes-AMG GT3 changing colors from black to beige.  It also resulted in the grille getting clogged up with dirt and sand.

An extra-long pit stop that was used to clean up the car a little (in addition to regular service) dropped him down the order to fourth, but the damage had already been done.  Marciello’s Mercedes was down on power due to the dirt.

Later, Marciello had contact with Audi Sport Team WRT’s Sheldon van der Linde.  This contact knocked van der Linde off into the dirt and cut Marciello’s right rear tire.  An unscheduled pit stop, plus a penalty for avoidable contact meant that Marciello finished two laps down in seventh, costing him the Intercontinental GT Challenge drivers’ championship.  You can’t win them all. – Phil Allaway

NHRA: Break Out the Crowns

The NHRA Toyota Nationals from The Strip at Las Vegas Motor Speedway are in the books and two professional class champions have already been crowned. Steve Torrence is your 2018 NHRA Mello Yello Series Top Fuel world champion while Mike Janis won the title for the E3 Spark Plugs Pro Mod Series.

Torrence appeared to be on track to win the championship last year before being derailed halfway through the Countdown. He came back in 2018 determined to make a statement and he’s done just that. He was the No. 1 seed in Top Fuel entering the Countdown and has been a perfect 5-0 so far through the first five events. Those five wins guaranteed no one could catch him and today he clinched the title with one race remaining. The only thing left is to see if he can do something unheard of and go a perfect six for six through the Countdown.

“This is a lifelong goal right here,” said Torrence. “All the glory goes to God, my mom and dad, because without them none of this would be even be possible. Every one of those Capco boys on that race team because they put their heart in it and it is hard to beat people with heart. All the boys back home at Capco, we got it done guys. This is unreal. To all those people who said we couldn’t do it, we are here.”

Torrence faced off against Leah Pritchett in the Top Fuel final and put down a run of 3.751 seconds at 326.32 mph to best Pritchett’s 5.317 seconds at 148.85 mph. Torrence also raced his way past Shawn Reed, Billy Torrence, and Richie Crampton in earlier rounds.

The battle for the championship will go on to the final round in Pomona for Funny Car, but J.R. Todd took full advantage of a first-round loss by Robert Hight, progressing all the way to the finals where he faced off against Matt Hagan. Todd ran 3.921 seconds at 318.39 mph to defeat Hagan, who ran 4.087 seconds at 263.62 mph.

Todd now holds a lead of 74 points over Robert Hight heading to the final race at Pomona.

It was defending Pro Stock champion Bo Butner, sporting a “Back to the Future” (or “Back to the Butner” in this case) paint scheme in honor of Halloween, versus Erica Enders for the final round of Pro Stock. Give it to Butner, with a run of 6.657 seconds, 207.43 mph over Enders’ 6.652 seconds at 206.57 mph. Butner also got by Alex Laughlin, Jason Line, and Matt Hartford in earlier rounds.

Tanner Gray continues to lead the point standings by a solid 140 points over second place Jeg Coughlin, Jr. although he was unable to actually clinch the title in Vegas.

Pro Stock Motorcycle’s title still remains very much up for grabs. Matt Smith entered as the points leader and helped himself a good bit by taking down his closest competitor, LE Tonglet, in the first round, but Smith fell in round 2. The day went to Hector Arana, Jr., who ran 6.885 seconds, 193.35 mph to defeat Eddie Krawiec’s 6.911 seconds, 195.05 mph.

Smith held on to the points lead, but Krawiec is now just 4 points behind him, with Tonglet, 61 points back, and Arana, 64 points back, still in contention. This race will go to Pomona.

For Pro Mod, Las Vegas was the closing event of the season. Mike Janis entered the event as the points leader, leading Rickie Smith by 24 points. When Janis went out in the first round, it opened a door for Smith, but Smith failed to capitalize and went out in the second round, making Janis the 2018 champion. – Toni Montgomery