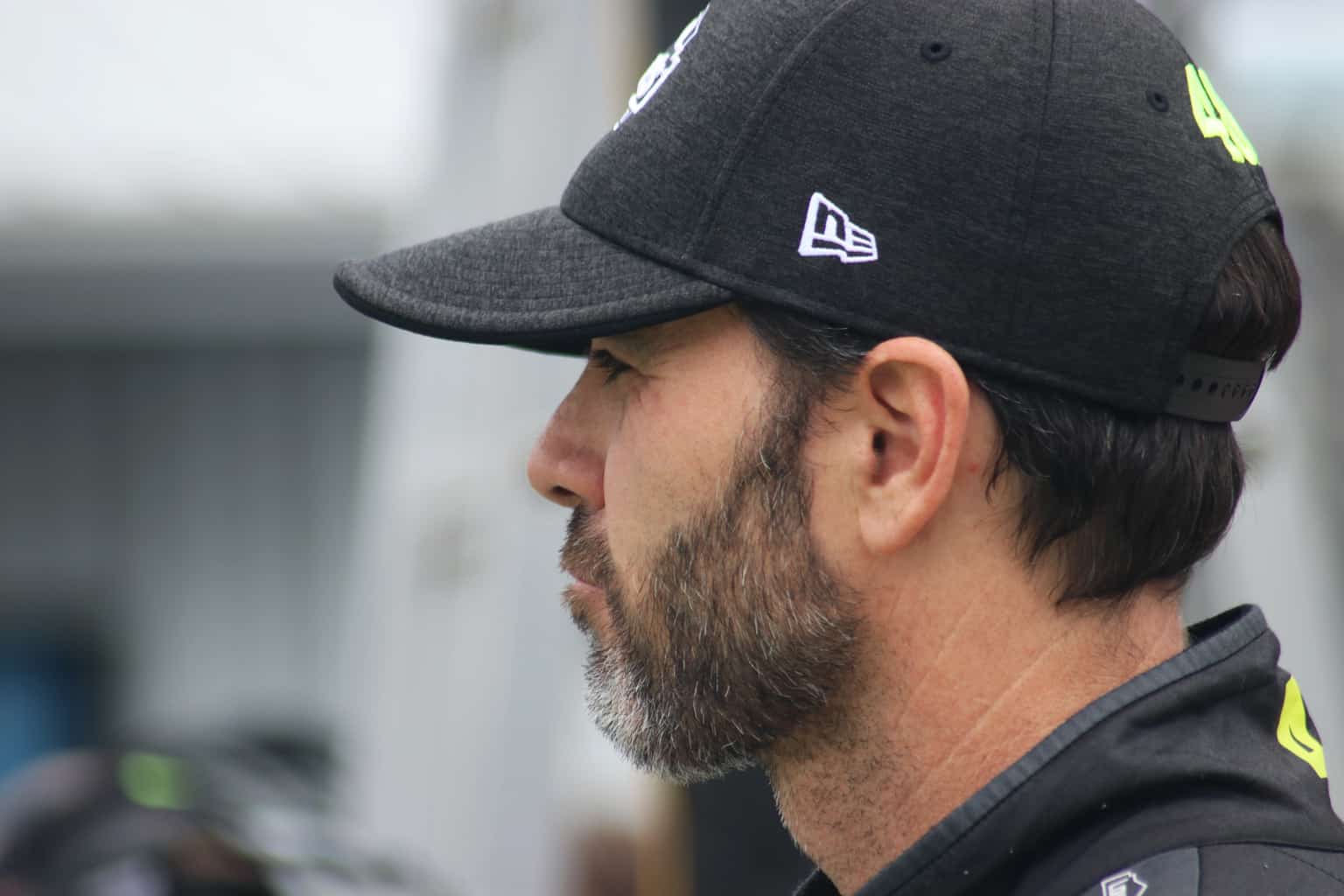 Sunday’s race was hard-fought for every position.  At times, groups of five or six drivers would be pushing for the same square of real estate and there was often more take than give.  Through all of it, Daniel Suarez drove like a veteran.  Qualifying eighth, Suarez got shuffled a bit early, even going a lap down briefly before coming on strong late in the game to finish ninth.  To get there, he passed a hard-nosed Jimmie Johnson, a pair of teammates with a lot at stake in Chris Buescher and AJ Allmendinger and a hard-charging Ty Dillon who had made himself very difficult to pass all day.

Suarez is still in the hunt for a 2019 ride, though he’s hinted recently that he’s working on a deal.

If you didn’t like that finish, I don’t know what’s left. What fans saw Sunday was every driver in shouting distance going for the win, teammates be damned, playoffs be damned.  Brad Keselowski pressured teammate and title contender Joey Logano for the win, while Denny Hamlin battled teammate and title contender Kyle Busch behind them.  Martin Truex Jr. took his shot.  It was short-track racing at its finest, with tempers and drama and a little strategy thrown in for good measure.

And it was like that for every position among the 20 drivers on the lead lap. Not one driver gave an inch all day.  Toward the end, the pressure was on and the field as a whole rose to the challenge, fighting for everything with a tenacity you don’t see at the bigger tracks. Even early on, nobody gave in. Johnson fought like a wildcat for 10 laps to stay on the lead lap coming to the end of stage two and pulled it off. Suarez, Ty Dillon, Allmendinger all made statement runs.

And what a statement the race was.  Martinsville is, after all these years, still NASCAR’s perfect track.  Withstanding poor dates on the schedule and all the change in the sport, coming to this track almost guarantees a race that gives fans something to talk about on Monday. Nobody does it better.

When you look at the race as a whole, Logano should have won.  He had the best car almost from the get-go, starting 10th and leading lap after lap for a tally of 309 circuits  He held off challenges on restarts, and while a car with better long-run speed might have had a chance, the race didn’t play out that way.  Instead, it played right into Logano’s hands.

Had the final restart come a few laps sooner, Truex might have been able to make that last-lap pass stick. Instead, Logano had half a lap to make a decision and he had one shot to make things work. He got it done with a classic bump and run, shoving Truex out of the way but not wrecking the No. 78.  Truex wasn’t happy, stating that Logano “won the battle, but he ain’t gonna win the war,” a thinly-veiled promise of payback.

Logano becomes the first driver guaranteed a shot at the title, something that was once taken from him at this very track when a 2015 feud with Matt Kenseth ended with Logano’s car a smoking heap and out of contention.  He’s made it back twice since, finishing second in 2016 and fourth in 2017.  Is the third time the charm for Logano?

How about that playoff picture? Heading to Texas with two to go before the final cut, Kurt Busch, Chase Elliott, Clint Bowyer and Aric Almirola are below the line.  Logano is in, and Kyle Busch, Truex and Kevin Harvick sit first through third in points.  The Big Three and a dark horse, right?

Not so fast. It’s certainly possible that Kurt Busch, Elliott, Bowyer or Almirola could win at Texas or Phoenix, and a win by one of them would bump Truex and/or Harvick on points. As of now, it’s seven-time winner Harvick in third who would see the ax.  At the beginning of the season, surely nobody would have even questioned his inclusion as a title favorite, but with just one top five since the playoffs began, suddenly Harvick’s ground isn’t so firm. It’s a long season, race fans, and you can’t write anyone off.

Why… didn’t spring winner Clint Bowyer pull it off?

One thing about Martinsville is that it’s rarely the same track twice in a row.  What works in one race might be off the pace the next. Keeping up with the track is a challenge even for the most experienced drivers and crew chiefs. Bowyer never quite found the balance that could take him to the front, running in the back half of the top 10 every day.

Contact from Johnson late in the race was the final blow to Bowyer’s repeat bid as Bowyer spun and lost a lap, finishing 21st after Johnson and Suarez tried to take matters three wide for position. While that was the end of a solid run, it wasn’t the reason Bowyer wasn’t a contender.

How… big a deal is Jimmie Johnson’s new sponsor?

Take a look around and see how many full-season sponsors are left in the sport.  Lowe’s, Johnson’s departing sponsor was one.  FedEx on Hamlin’s No. 11 is one … that’s pretty much it.  A few others have a main primary sponsor with a handful of other races farmed out, but the days of full-season sponsors at the dollar level a top team commands are all but over.

Yet Sunday, The No. 48 team defied the odds and announced Ally Financial has signed on for the next two years with a financial commitment similar to what Lowe’s was spending. While technically new to NASCAR, Ally is the former GMAC Financial, a longtime supporter of Hendrick Motorsports and primary sponsor of one of Hendrick’s Cup teams in the 2000s.  And now, they’re back.

That’s a major vote of confidence.  It shows confidence in a sport where investors have balked at that kind of commitment, with the implication that there is still enough value in NASCAR to invest heavily.  It’s also reaffirmation to an aging champion that his skills have not yet been bested by time.

Was some pressure lifted off Johnson’s shoulders with the announcement?  He certainly drove like it Sunday.  As has been the story of his season, Johnson didn’t have a car capable of winning, even for a nine-time victor at Martinsville.  But he raced every lap like it was the last and the battle royal between Johnson and leader Logano just to stay on the lead lap was vintage Johnson, the bulldog of a driver who will not give an inch with a spot on the line. A new crew chief and a new sponsor will test Johnson next year, but he’s shown he’s the driver he always was, one with teeth and tenacity.

I am totally confused why Truex is so upset. I would be more upset with his spotter or himself. If he just slows his pace to keep Logano on the outside there is little Logano would have been able to do other than something a whole lot more blatant and much more unacceptable to win the race. The bump and run has been an acceptable move in NASCAR for decades now even the golden boy Jeffy Gordon did it numerous times over the course of his 80+ wins.

This one is more on Truex and his spotter for putting themselves in the position to let Logano get behind the car instead of staying “even”. NASCAR would have a harder time letting it play out if Logano hooks the 78 in the right rear quarter panel versus a bump up the track. Truex actually if he does not get loose getting back on throttle off of four, still has a good chance to win.

It could be very interesting to see if two others in the bottom four win Texas and Phoenix. That would real throw a wrench into Miami’s story line.

So essentially GM still using not pad back taxpayer dollars from 2008 2009’s govt. handout is sponsoring a Chevy driver and team. This is not that great of news since it is not an “outsider” sponsor or not a sponsor “unrelated” to the team or a manufacturer.

So this tells me that even Hendrick is having a hell of a time finding sponsorship for a 7 – time champ with what 90+ wins or whatever. This is not a good look for NASCAR’s future that it needs a manufacturer “sugar daddy” sponsor for one of its most high profile teams.

Golden Boy Jeffy Gordon? Been a while since I’ve heard that.Why do I sense you weren’t a fan??

I may be wrong about the specifics, but I was sorta surprised the leaders came in to the pits at the first caution at around lap 40 – new tires after just 20+ miles , plus qualifying miles, sounds like old (pre-repave) Darlington, unless the idea was to also make adjustments in anticipation of the track changing or to make adjustments after qualifying because this was an impound race (I am not sure what is allowed before and after an inspection on race day).
I was also surprised to read more than one driver attribute some of their problems, at points in the race, to aero and to the presence or absence of clean air…maybe Martinsville is much more complicated than I had thought.

Two points to make, both a bit cynical I suppose. even though Martinsville could be expected to produce the best race of the “playoffs” ratings were still down 18+% from last year. Plus there was a fair amount of bare aluminum showing in the overhead shots. So what does it take to turn that around?

As to Ally being a great replacement for Lowes. Go figure. The old GMAC hooking up with the owner of quite a few GM dealerships. I would have been more impressed if it was someone not involved with the automobile industry. But then again who am I ?