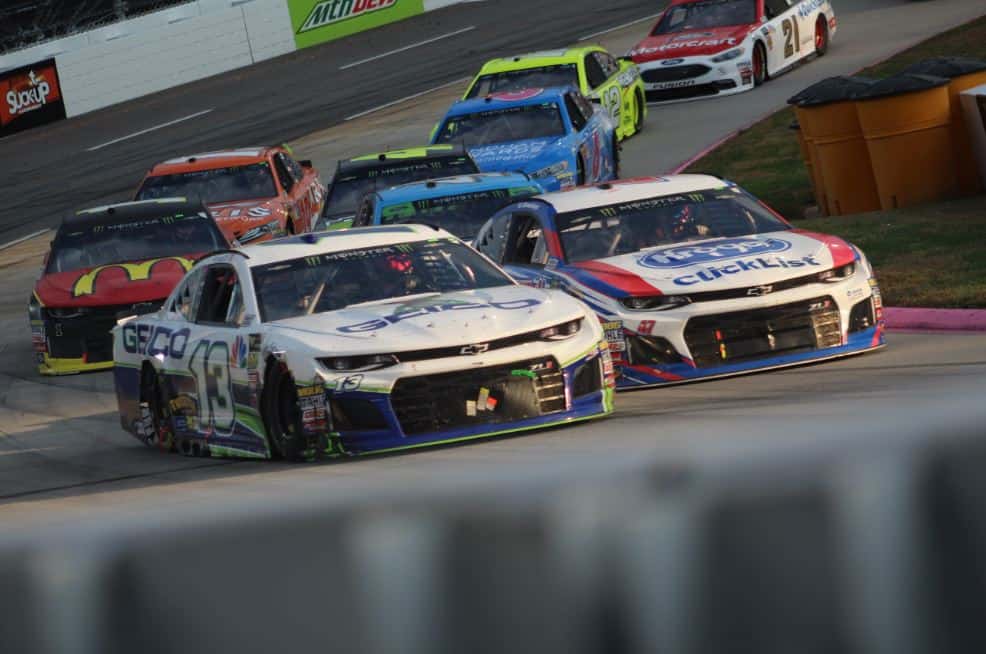 With the race ending in one of the most thrilling finishes in recent memory, there was also some good news for the small teams, who managed to not only finish well but actually run well through the majority of 500 laps.

Martinsville has always been a place of potential for small teams. Every year we seem to have at least two back-end teams reach the top 15, while others are taken out in an accident or on that dreaded outside lane on a late restart.

This race had a bit of everything from good qualifying runs, penalties, accidents and good pace from these teams. Thankfully for some, the day ended with important doses of momentum heading into the final trio of races in 2018.

For the second straight weekend, Chris Buescher was the Frontstretch “Underdog of the Race”, doing so for the sixth time in 2018 after finishing 13th on Sunday. He became just the second driver to win it in succession, with JTG Daugherty Racing teammate AJ Allmendinger doing so over the summer.

Buescher has seen some good moments at Martinsville in the past with JTG, finishing 11th in the spring race in 2017. Even just one race can have an effect on a driver’s mood for a track and it showed from the Texan on Sunday.

Starting 15th, Buescher ran no lower than 25th and kept a 16th-place average running position, his highest in the last seven races. Additionally, his 13th-place result tied his best since Daytona in July.

JTG had two cars finish in the top 15 for only the second time outside Daytona in the last 47 races. That was possible when Allmendinger trailed Buescher by one spot in the final run to the checkered, coming home 15th.

Allmendinger has had some of his closest run-ins with oval Victory Lane in NASCAR, finishing second twice (2012, ’16) with seven total top 10s in 21 starts. A 14th isn’t a stand-out but marked a rare moment in JTG’s performance to have both cars bring it home solid.

Behind the JTG duo was Ty Dillon, who arguably ran his most competitive race of 2018 with Germain Racing. Though he finished 15th, the No. 13 Chevrolet ran even better, jumping to run consistently in the 11th position before falling back on the final green-flag run.

Though it could have been more, Dillon has lots to be proud of following a strong run. The result was only his fifth top 15 of the year and just the second outside a plate track, the other being next weekend’s track of Texas Motor Speedway.

“Hopefully we showed that we can get more and more competitive,” Dillon said. “We really executed well. We had a great, great racecar. I’m proud of our effort and how we’re building these Camaros to get better each week. Hopefully, we can roll this momentum into Texas and end the year strong.”

Closing out the top 20 was David Ragan, the driver from Front Row Motorsports who topped the underdogs by qualifying 14th. The run was his best non-plate effort all year and put the Ford team ahead of the curve at the drop of the flag.

That, unfortunately, came to an end Sunday morning when Ragan’s No. 38 was pushed to the rear of the field after failing pre-race inspection. In fact, the car failed twice, which led to a loss of one crew member and the No. 38 car chief for the race.

Despite the setback, Ragan came through the field slowly and cracked the top 20 in 18th spot. The run was his 12th top 20 of the year and his best Martinsville finish since 2015.

With a small gap between the underdog groups, Cole Whitt was the next best thing in the 24th spot for TriStar Motorsports. This veteran ran his first oval race since June and started the race from the 28th spot.

From there, he battled just outside the top 20, passing cars from Hendrick Motorsports and Joe Gibbs Racing on speed toward the final stage. A respectable run given the brutality of Martinsville.

Michael McDowell wasn’t able to match teammate Ragan’s speed, finishing 25th, three laps down. His day was injured when he was handed a pit road penalty to start stage two.

DJ Kennington made a surprise appearance in the No. 96 for Gaunt Brothers Racing, replacing Jeffrey Earnhardt to return to the team for the first time since July. His run ended in the 27th spot while Regan Smith was 28th for Leavine Family Racing.

Ross Chastain impressed in qualifying, just missing out on the second round of qualifying, eventually starting 22nd after driver penalties. The day wasn’t as kind with a 29th-place result for Premium Motorsports.

JJ Yeley was 31st in his No. 23 Toyota ahead of Landon Cassill and StarCom Racing in 32nd. Jeb Burton made his first Cup start since 2016 for Rick Ware Racing, capping off a double-header weekend with a 33rd after cutting a tire early in the event.

Darrell Wallace Jr. was among those starting from the rear after crashing his primary car in qualifying on Saturday. The No. 43 Richard Petty Motorsports back-up then failed prerace inspection, making a 34th-place finish seem fitting in a tough weekend.

Joey Gase made his seventh start of 2018, finishing 35th in StarCom’s No. 00 machine while Matt DiBenedetto managed 36th after a stop in the garage in the final stage.

Timmy Hill‘s race was far too exciting in all the wrong ways for the No. 66 crew, who left the jack under the car following a pit stop. This forced Hill back to pit road, and later, burst into flames after an engine malfunction after 368 laps. He finished 38th while Hermie Sadler ran his first race of 2018 for Premium in 40th place.

The Camping World Truck Series ran their Texas Roadhouse 200 on Saturday (Oct. 27). With a few new names added to the entry list, it was a full-timer in Brett Moffitt who brought home a second-place finish for Hatorri Enterprises. The finish, his 10th top five of the year, was a surprise after struggling in qualifying and both stages.

Beyond Moffitt, the next underdog team was On Point Motorsports, who fielded Jeb Burton in his first Truck start of 2018 in the 15th spot.

Tough luck today blew a RF early then lost 4 laps in the pits because of the damage. We had a solid car. Thank you @RickWareRacing for the opportunity.

We fought hard all day with the #38 team. Had to start from the back and battled back to finish on the lead lap in P18. @MartinsvilleSwy never disappoints. Great race at a great SHORT TRACK!

Yes, Martin raced Joey clean no question about it. But Joey just put his team in a position to win the championship and that’s what he gets paid to do. #MoreShortTracks

? RECAP: Have yourself a day, @tydillon!

He drove his @GEICORacing Camaro ZL1 into the top 10 yesterday @MartinsvilleSwy, running as high as seventh! After a strong 500 laps for the team, Dillon earned a top-15 finish! pic.twitter.com/GsScoYdYE7

I’ve been noticing this uptick in performance. It’s hard amidst the playoffs and the fierce competition at the front to pause and realize what a sensational late-season run @JTGRacing is putting together . Especially @AJDinger https://t.co/Oz2lAJlwlI