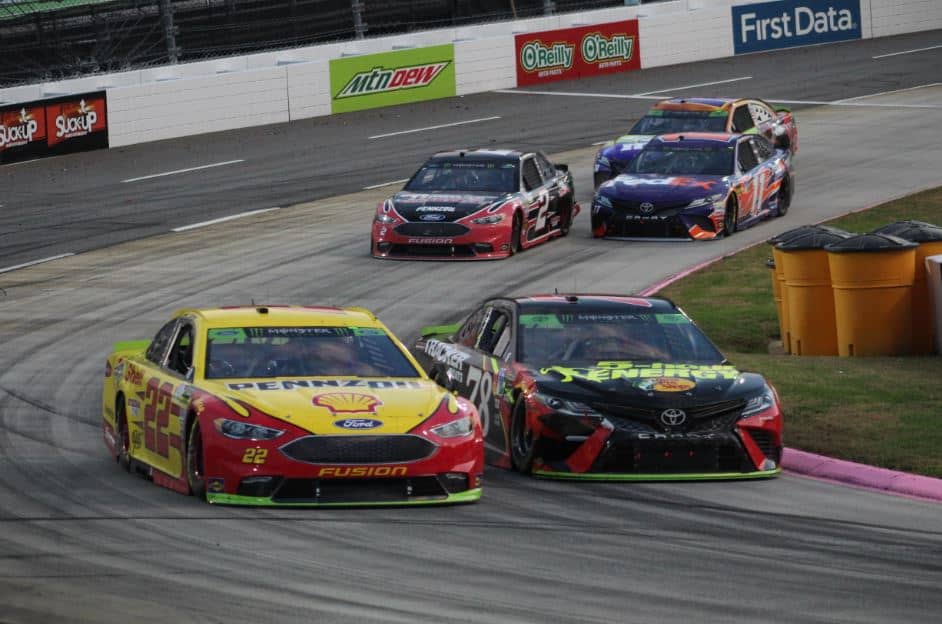 For much of the week, the talk in NASCAR has surrounded the final battle in last Sunday’s (Oct. 28) First Data 500 at Martinsville Speedway. Joey Logano and Martin Truex Jr waged a multi-lap battle for the lead that ultimately ended in Logano bumping Truex out of the top spot, the pair bouncing off of each other coming to the checkered flag and Logano emerging as the victor.

Last season, the end of the Martinsville fall race also experienced fireworks when Denny Hamlin bumped race leader Chase Elliott on the second-to-last lap, though Elliott ended up in a spinning, smoking smack to the wall and a 27th-place finish compared to Hamlin’s seventh-place result.

When Push Comes To Shove

Today’s NASCAR has become a win-at-all-costs affair that provides no consolation for anyone who finishes second. When it comes down to the end of a race, victory becomes the only thing and there’s no room for feelings. What Joey Logano did to Martin Truex Jr this past Sunday at Martinsville Speedway was understandable given the circumstances. It’s also no different than what Denny Hamlin was trying to accomplish when he divebombed Chase Elliott exactly one year prior.

I’ve heard it labeled dump-and-run, using the chrome horn or just a flat out dump. Regardless of what you call the move, there’s no difference here. Logano clearly took a page from the Denny Hamlin Guide To Passing At Martinsville and laid the bumper to Truex.

The scenario might have been a little different but aren’t they all? Think for a moment what must be going on in the mind of a driver running in second place.

When a competitor is right behind the leader at a short track, they grip the wheel a little tighter with every lap that passes. Desperation begins to run rampant as they realize the number of opportunities they may have to seize the top spot is rapidly shrinking. That’s just to get the win, let alone factoring in that there are title implications in terms of being part of the Championship 4 at Homestead-Miami Speedway.

For both Hamlin and Logano, the countdown of time they had to make a clean maneuver hit zero.

Hamlin made contact with Elliott and it sent the young driver backward into the Turn 3 wall. Logano punted Truex coming to the checkered flag after running lap after lap side-by-side, trying to pass the Furniture Row Racing Toyota.

No matter how you dress it up, contact is contact. Outside of hooking the car’s bumper, it’s impossible to be certain that a nudge will result in a spin or simply send a rival a lane or two outside of their intended line.

Truex could have potentially gone all the way around. Elliott might have been able to save his car before it wound up facing the wrong direction. Point is, while the result was different in each scenario, the move to gain the lead was the same.

The only significant difference was the timing. Logano shoved his way past Truex in the final turn on the final lap. Hamlin put Elliott in the spin cycle with still a couple scheduled laps remaining.

It’s a scene that gets played out weekly from short tracks across the country all the way up to the highest level of NASCAR racing. The prize may change but the motivation always remains the same. The banging of bumpers is constant, no matter the participants.

But it won’t be any consolation to Truex or Elliott, they were both victimized by the same thing: another driver doing what they had to do to get the win. – Frank Velat

Literally, the only similarities between these two incidents are that both times the drivers involved were a part of the championship battle and that the leader at the end didn’t win the race, but that’s where it stops.

First and foremost, in the Logano v. Truex incident, both drivers were able to keep going and finished first and third when the checkered flag flew. Truex may have made the final pass cleanly, but that’s not to say there wasn’t any beating and banging along the way on the part of both drivers as there should be when a win and a trip to the championship are on the line, especially at a short track.

Sure, Truex was upset with being bumped out of the lead with his first career Martinsville Speedway victory just seconds away, and who wouldn’t be, especially under the circumstances?

“I just took a cheap shot at the end there,” a heated Truex said after the checkered flag flew. “We raced him [Joey Logano] all clean. I pretty much had the feeling going to the backstretch that that was going to happen and there was nothing I could do about it.

“I can promise you I won’t forget what he did.”

Logano’s view of the contact was drastically different though.

“That was just a hard great race. NASCAR racing at its finest,” Logano explained. “It was a lot of bumper-banging toward the end and a hard race. You know, we didn’t wreck each other. We bumped into each other a lot and that is what this sport was built on.

“I know a lot of fans out there aren’t too happy about it but it is racing and that is what NASCAR is about and what stock car racing is.”

Meanwhile, in the other notable exchange between Hamlin and Elliot, Hamlin took it upon himself to drive straight through Elliott, never letting up until the driver of the No. 24 Chevrolet spun out of the lead and banged into the outside wall, bringing out the caution. In fact, neither of the drivers involved in last season’s contact managed to win the race.

Last season, the two drivers involved immediately went at each other and had a heated discussion about the incident, while last weekend, Logano and Truex traded barbs in their post-race interviews separate from one another.

Another difference is the reception of the drivers when they emerged from their cars after the checkered flag flew. The perceived villains in both incidents received boos from the crowd, but Logano’s reactions had quite a few cheers mixed in as well.

Of course, Elliott, who immediately confronted Hamlin after the two drivers parked last season, received a chorus of cheers, as did Truex when he vowed Logano would not win the championship.

It wouldn’t surprise me if an extra part of the boos Hamlin received had something to do with him ending the chance for a feel-good story of a first-time winner in Elliott, while Truex has already got several wins to his name, albeit none on a short track.

In the end, the 2017 incident was a pure dirty tool by a driver who chose to push his way through a fellow competitor in hopes of a win (that he didn’t even end up getting), while what we saw last weekend was pure short track racing at its finest.

In fact, owner Roger Penske said it best in his post-race media availability.

“He didn’t knock him off the racetrack,” Penske explained. “It was side-by-side racing at the end. You could see that. Nobody lifted.”

The bottom line is there’s a huge difference between the dump-and-run last season and the bump-and-run we saw last weekend. – Beth Lunkenheimer

How ’bout if it boils down to Joey vs. Chase?

It was funny when buttsucker Elliott got turned. I just don’t like that boy.

Your name is perfect for you. Because you are a major DICK!

Beth,
What made the end of the Martinsville race exciting, Joey dumping Martin? I don’t think so.
It seams like what everyone is saying is Martin should have followed Logano around for the last six laps and did the dump and run to win the race (real exciting). Once I’m no longer vested in Nascar I’m done as a fan and spectator.

Pretty obvious to me that Joey decided his best course of action was not to continue to race cleanly side by side on that last lap and “let the best man win” but, rather, back off in turn two so he could fall in behind Truex and have a clear shot at the 78’s back bumper.

Seems like there were two different unwritten rules at play here. “Racing someone the way they race you” versus “All’s fair and anything goes on the last lap”. We, as fans, had a chance for another Kurt Busch/Ricky Craven finish like Darlington at Martinsville where both drivers were banging doors and fenders and smoke was coming off the tires as they came to the stripe. By running side by side with Truex for lap after lap on the high side Logano showed that he had the driving ability and the equipment to compete cleanly for the win without resorting to moving Truex out of the way. To me, it’s a shame Joey made the decision he did. He’s a better driver than that.

There was a chance for a finish like Bill Elliott and Alan Kulwicki at Richmond in 1992. Drivers now don’t “race” like that.

I found it. Watch and remember what it was like to race with real race cars.